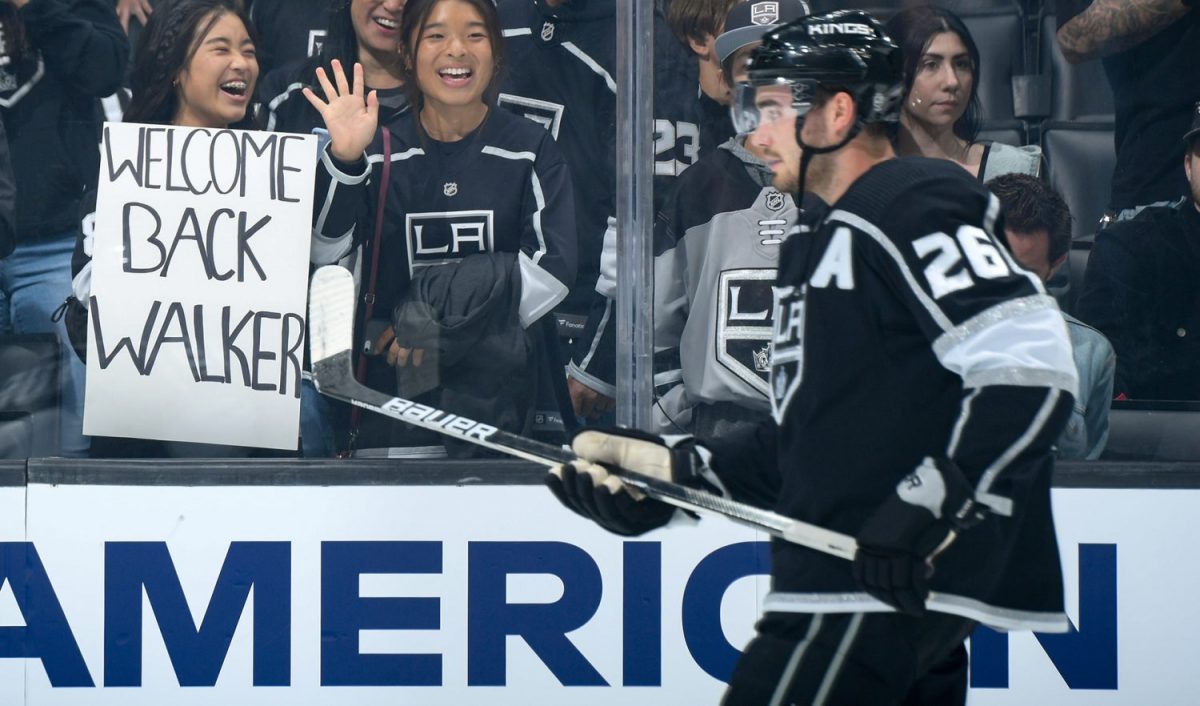 The LA Kings earned their second victory of the preseason with a 2-1 victory over the Anaheim Ducks on Sunday evening at Crypto.com Arena.

Forwards Adrian Kempe and Arthur Kaliyev each scored power-play goals in the first period, while goaltender Jonathan Quick made 24 saves on 25 shots to earn his first victory of the preseason.

It was the visitors that got the scoring started on the evening, however, less than a minute into the game. Kempe broke up a pass in the neutral zone, but the puck deflected between a pair of Kings and into the path of Anaheim forward Max Comtois, who hit Rocco Grimaldi for a tap-in goal at the back post.

The Kings bounced back, however, with a pair of power-play goals to take a 2-1 lead into the first intermission.

First, a strong passing sequence found Anze Kopitar on the left-hand boards, from where the Kings captain threaded the needle to Kempe, who collected the puck and snapped his shot home at the back post. The Kings added a second power-play goal within the final 30 seconds of the first period, as forward T.J. Tynan fed Arthur Kaliyev for a one-timer from the inside of the right-hand circle, which he powered past Anaheim netminder John Gibson for the first lead of the evening for the Kings.

The second and third periods went along, scorelessly, though it was the Kings that had the bulk of the puck possession. Gabe Vilardi hit a post for the Kings, while a Jonathan Quick save hit the post on the way through at the other end from a Ducks point of view. Neither team, however, was able to find the back of the net, resulting in the 2-1 final.

Gabe Vilardi
On if he felt the Kings found more puck possession in tonight’s game than in previous games
Yeah, I agree with that. I think similar to last year, we’ve got to start finding ways to score more goals, but definitely the chances were there. If you put up 40 shots, every game but only score two goals, some nights like tonight, maybe it’ll win games but other nights, teams are going to score more than two goals. Quickie played great, we’ve just got to find ways to score goals however that is.

On the increased puck movement on the power play
In all honesty, it’s not a lot of me out there, I’m in front of the net and I’m really just trying to create attention and try to find that that backdoor space. But yeah, they were moving around really fast and I’m in more of a recover the puck mode, just trying to create space for other guys by being almost like a distraction and bringing guys in. You kind of saw that on Juice’s goal today, I guess. We’ve been working on that and I actually really liked it, it looks good.

On the ability for players to move around more in different positions on the power play
We’ve got three lefties out there, I’m the only righty [among the forwards]. It’s hockey at the end of the day and you’ve got to read the play and gain possession before position, so you’ve got to have the puck before you can go into roles and spots. It helps having Kevin and Juice, who are very similar players I think in terms of half-wall capabilities and one timing the puck. It’s easy for them to switch.

Todd McLellan
On if he felt like the Kings looked a bit more like themselves in the offensive zone
Yeah, I thought in phases of the game it did. Not so much early, second period yes and as the night went on, I thought you could see more of our game coming together, the pieces systematically but also just the tenacity of the forecheck and the way we’re playing and maybe that’s a good sign for us. Special teams we’ve had a little bit of work on now, we saw some production from them, both penalty kill and power play, so that’s a good sign. But I would say yeah, closer to our identity.

On his thoughts on the team’s 5-on-5 play tonight
5-on-5 we’re not getting enough done offensively, I think, in exhibition season so far. We haven’t held onto pucks in sustained attack time until tonight, tonight was the first night where we actually got it going for a little while. Some polish around the net seems to always be what we’re looking for and that has to be there again. I would say throughout the exhibition season it’s slowly been improving. Tonight, it got closer to what we’ve what we wanted offensively. Defensively, knock on wood, we haven’t given up much and when we have the goaltenders have been there for us. Work in progress, like every other team.

On the power play and working in certain concepts from practice
There were some concepts that we’re trying to bring in. Let’s face it, we’ve probably had 20 minutes of power-play time really, and discussions and meetings, so we can’t get it all done at once. The one thing that we did have was a lot of the pieces to a unit tonight in the lineup. That’s one of the difficult things as a team or as a staff, is when a lot of guys are still trying out for the team, you never really get your full units and or your penalty kill pairs. I hope that will start to happen this week.

On his impressions of Sean Walker in his first game back from injury
I couldn’t be happier for that guy. I’m talking about an exhibition game, it sounds like we’re in game seven, but for what he’s gone through, to claw his way back. He got better as the night went on I really thought. His first period was his tough period, it was happening fast but he got into the game quickly. If he’s feeling good and the leg is feeling good, we’ll keep playing him and try to get him up and running. A good first night for him.

On giving Walker the “A” on his jersey tonight
Leadership isn’t always when you’re in the lineup, it’s what you do to get back for your teammates too. He epitomizes it, so he deserved that tonight.

Notes –
– Forward Adrian Kempe scored his second goal, and second power-play goal, of the preseason. Kempe has scored in both exhibition contests he’s played in.
– Forward Arthur Kaliyev opened his preseason account with a power-play goal in the first period.
– Kaliyev also led all players with six shots on goal and 11 shot attempts.
– Defenseman Drew Doughty, as well as forwards Anze Kopitar and T.J. Tynan, each collected their first points of the preseason with power-play assists.
– Doughty also led the Kings with 25:23 in total time on ice this evening.
– Goaltender Jonathan Quick made 24 saves on 25 shots as he went the distance to earn the win. Quick has now made 41 saves on 43 shots from his two preseason appearances.

The Kings are expected to return to the ice for practice tomorrow morning at 11 AM at Toyota Sports Performance Center.