With offseason shoulder surgery behind him, Sean Durzi is right on track in his return to action 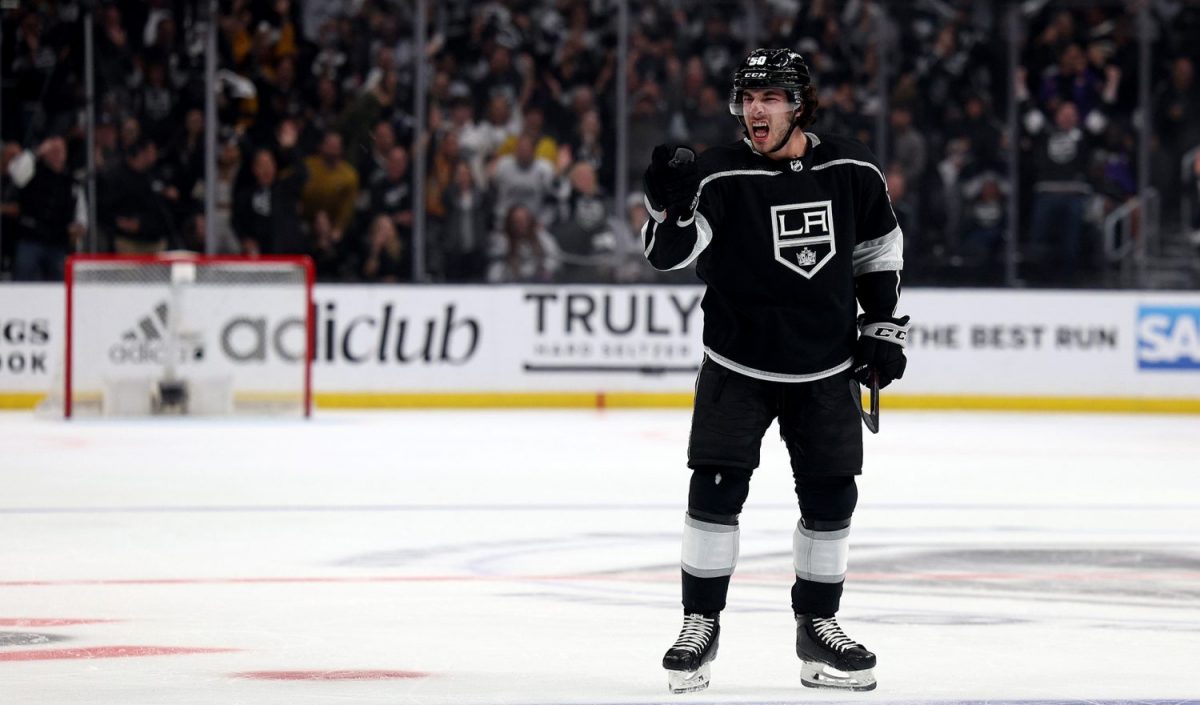 For the first time yesterday, the LA Kings were whole once again.

As Viktor Arvidsson rejoined the main group at Toyota Sports Performance Center, the Kings finally had all expected members of the season-opening roster on the ice at once. Arvidsson was the last piece of the puzzle, joining the most recent add before him in defenseman Sean Durzi.

Durzi has been on the ice since day one of training camp, though he began with Groups B and C for the first week or so of camp, skating in a non-contact jersey until he joined the main group on Wednesday for his first full-on skate of the fall. Durzi is working his way back into the fold off of shoulder surgery, an injury which was managed during portions of last season, though you might not have known it from his play.

Heading into the summer, Durzi and the Kings made the decision early to get the procedure done. While the injury did eat into his summer preparations a bit, his goal entering the offseason was to work on his skating, which was something that he could still do despite the injury.

“When I made the decision to kind of get it done and have to get it fixed, I knew the biggest thing I wanted to work on was kind of my speed and explosiveness,” Durzi said. “Talking to the people around me – the coaching staff, the trainers here – when it’s an upper body injury, you obviously have to take some time off but when I got back to it, I was able to do a lot of the explosive work. Maybe not kind of jack up my shoulders, but we have so many machines and there’s so much technology that I was able to kind of work on those kind of things.”

For the 23-year-old defenseman, this wasn’t his first experience with an injury stemming from the end of a season.

Durzi recalled back to juniors, when he had an injury towards the end of a season that wasn’t taken care of right away. That caused him to miss regular-season time the next year, which was one of the main reasons he was quick to make sure he got what he needed early in the offseason.

“There was one back in juniors, kind of a nagging thing and I really didn’t know I needed surgery until like three weeks before the season, so I ended up missing a couple of weeks,” Durzi said. “Similar idea where I had to monitor my training with it, that one was probably a little bit worse because I didn’t know what it was at first, it was nagging. This one I got ahead of it right after the season, got it done and in the summer I had a good plan, a good team in place and just had to execute it.”

The next step in the recovery process – after a player moves through summer rehabilitation, into individual skating and drills and eventually limited participantion in practice in a non-contact jersey – is finally adding contact into that equation.

The first re-introduction for Durzi into a full-contact practice came on Wednesday, his first time back in a regular jersey. It was yesterday’s practice, however, that was the bigger test, as the Kings worked in more of a “grinding” element in the words of assistant coach Trent Yawney. That was the first opportunity for Durzi to truly see how he held up in his return to action. He was excited to come out the other side feeling good.

“I’ve separated shoulders, but this is the first time I’ve come back from shoulder surgery, which is a little bit different,” he said. “Any upper-body injury, where you know you’re going feel it in contact, there’s always that hesitation but practicing at one-hundred percent and practicing with full contact with these guys up there, it gives me a little more confidence every single day. So [yesterday] was a really good day with contact in battle drills and things like that.”

Once he is fully back up to speed, the natural final step for Durzi is taking full-contact practices and moving forward into games.

In an ideal world, Durzi would be able to participate in at least an exhibition game or two, though that will naturally be dictated by how quickly he could get to game speed over the next week or so. If you asked Durzi today, he would say he’s not quite ready to make that jump into a game. He’s not yet prepared to play in tomorrow’s preseason games against the Ducks, though he has three additional opportunities between now and the regular season to work his way in.

“Not quite, I don’t think I’m ready,” he said, of playing on Sunday. “It’s nice to be out of the red jersey and to kind of get into some contact today but it’s a process, taking bodies and things like that, but I’m progressing well and it shouldn’t keep me out long.”

With the way Durzi plays the game, he wants to make sure that he’s one-hundred percent ready to go, because he wants to be able to commit all of himself to his team.

Durzi is known as a player who plays with his heart on his sleeve, complementing his skill game from the backend. By his own admission, Durzi is not one to give less than his all on the ice and he’s certainly not planning on changing that anytime soon. With that in mind, he’s not looking to rush himself back to hit a certain date, though with Opening Night now 10 days away, there’s still plenty of time between now and then for things to come together.

“It’s tough to know, but all I can say right now is I’m progressing well,” he added. “The biggest thing is taking it day by day, I’ve been so patient with it, I’ve done a good job this summer and the people around me have done such a good job that I want to make sure I’m getting ready to go.”

When he does finally make his return to game action, however, Durzi knows he’ll be doing so without the worry he carried for parts of last season, which was managing his shoulder. It likely factors into his desire to be fully healthy before getting back into a game.

When he gets to that point, it will likely validate the long summer of work he’s put in.

“Already, it feels better than it did last season, so that’s awesome,” he said. “I’ve noticed it a lot in my shot, the way I can handle the puck, my movements out there. When I first got the surgery, then you progress and progress and then I got to that point where I was [last season] and now it’s like I’m surpassing it and it’s really cool to see that. It makes it all worth it, makes patience worth it and to go out there hopefully feeling better than it was, it’s exciting.”

More on Durzi to come after today’s practice, with additional comments from the defenseman on his involvement in contract negotations this summer, which ended in a two-year deal with the Kings. We’ll also have several other notes from today’s skate and over the coming days, we’ll hear from assistant coaches Trent Yawney and Jim Hiller on how special teams are progressing early in training camp.