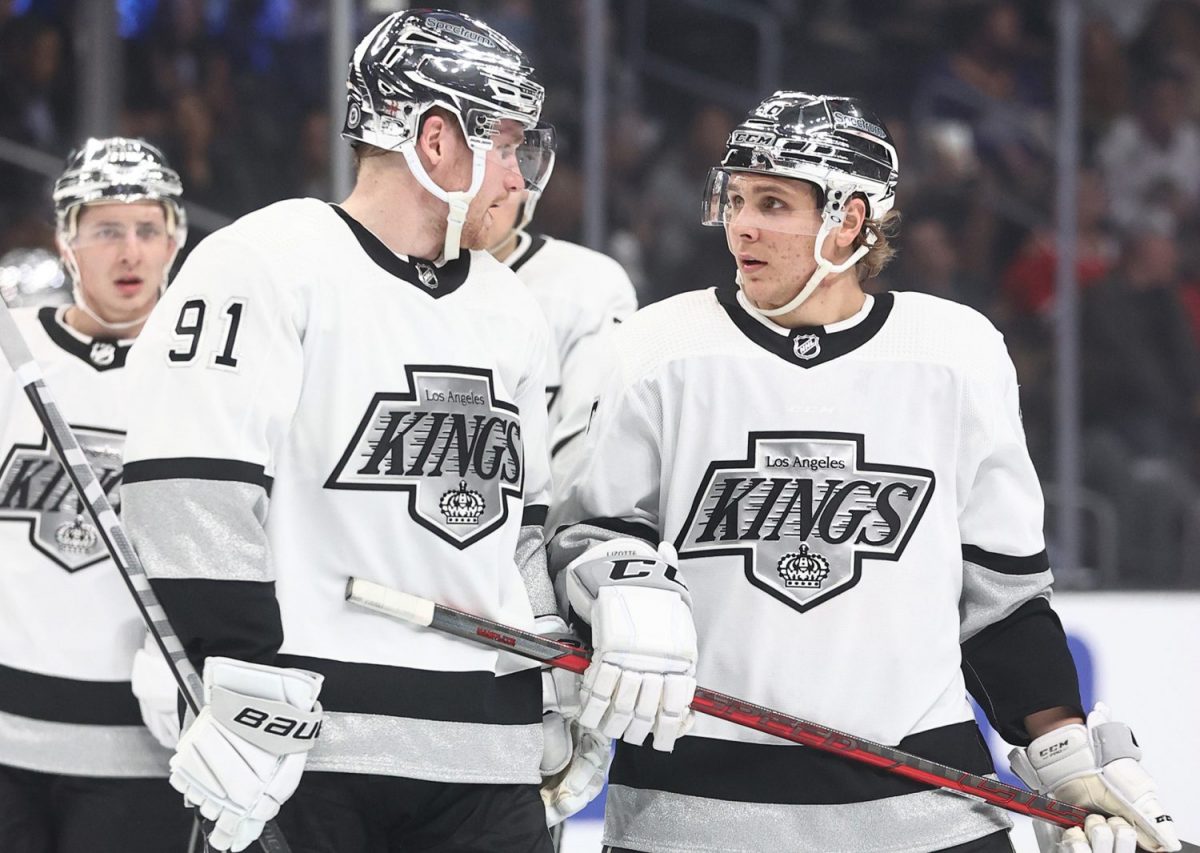 Last season, Blake Lizotte and Brendan Lemieux became a pair up front, as they two players carved out a niche on the team’s fourth line.

When playing together, Lizotte and Lemieux controlled just shy of 60 percent of the shot attempts, between 57 and 58 percent of scoring chances and high danger chances, not nearly 65 percent of the goals scored. The two players complemented each other well on a line that typically featured Arthur Kaliyev on the opposite wing, as the trio formed an effective energy line that the Kings to came to rely on.

“Anytime you have familiarity with players, it’s way easier to pick up versus trying to create new chemistry,” Lizotte said. “Coming into camp, for sure some confidence right off the bat with both Pep and Grundy too actually, I played a few games with him last year so we kind of knew what he brought to the table. Right from the get go, it’s been really comfortable.”

Both players posted respectable numbers without the other, but each saw a slight dip, or a role change, when the other was out injured. Both players had totals that were across the board better when playing together, giving them a comfort level entering camp on the same line.

Head Coach Todd McLellan noted that he thinks of Lizotte and Lemieux as a pair, as he has also done with individuals on other forward lines.

“Yeah, I would say that they’ve become a pair,” McLellan said. “I thought both of them missed each other when they were hurt last year, for different reasons, but I do see them being a pair. They’re wired in completely different ways, Pep is a big personality, Lizzo is a little more of a quiet personality, but it blends well and that’s the personal part of it. The on-ice part, they both play that tenacious style of hockey, they enjoy forechecking, they don’t have to be cute. Pretty straight and direct production from them and I think they push each other too, they keep each other honest and they push each other.”

With two-thirds of an effective line thought to be in place, the next step was adding the right third piece. Kaliyev was a great fit there as a rookie, but to reach his full potential as a goalscoring winger, he’ll need to play higher in the lineup, in different roles and different situations, lining up early in camp with Quinton Byfield and Alex Iafallo on a new-look line of their own. The natural fit became Carl Grundstrom, who emerged during the playoffs and has a unique combination of speed, power and offensive touch.

We saw that from Grundstrom at times last season and now he enters training camp for the first time with a true spot to lose, as opposed to an open spot he’s trying to cement. So far, his game has endeared itself to Lizotte and Lemieux, who have been impressed in more ways than one with their new linemate.

“I think Grunny is as skilled as a depth player as I’ve played with and I’ve played with a few highly skilled ones,” Lemieux said. “He makes a lot of really good plays, he’s got great hands and a terrific shot, but I love the simplicity that his game has and I think that’s when he’s at his best. He’s got two guys that complement that simplicity well, but it’s nice to have the guy you know you can get the puck too and he can beat someone 1-on-1 or he can make a backhand sauce pass right on the tape. A lot of guys who play in those bottom six roles don’t have the ability to do that, so it’s an ideal line.”

Grundstrom, in McLellan’s eyes, has improved in each of the four seasons he’s been with the Kings organization.

Coming into camp for the first time back in 2019, Grundstrom brought with him a confidence in his game, but being early in his development process, his toolkit just wasn’t quite there for him to contribute consistently enough at the NHL level. As he’s grown and matured, he’s become that player. Now, for the first time in his career, he’s entering camp with a spot to be taken from him, rather than needing to take a spot himself.

“I think he’s gotten better every year, he’s shown that he’s very capable of playing in high pressure situations, in playoffs last year,” McLellan said. “Even leading up to that, yeah he wasn’t in the lineup for a couple of nights but there were other reasons for that. We think he can be a full-time player and be an effective full-time player.”

Now, with Grundstrom set for a full-time role with the Kings, on an every day basis, and Lizotte and Lemieux ready to pick up where they left off last season, the stage is set for the three players to feature together on a line.

As the returners on that line, Lizotte and Lemieux have both been complementary of the fit that Grundstrom has provided with their hardworking approach.

Lizotte – I think Grundy brings a different element to Pep and my games, he’s shown so far in preseason that his skill has grown and he’s become more of a complete player, especially in the d-zone. He’s a workhorse, Pep and I have both already talked about it and there’s no shortage of work on our line. It’s really nice to have a guy that’s willing to get in there in the trenches with us. It seems like it’s been clicking so far in camp.

Lemieux – Grunny has a little bit more forechecking and a little bit more skating to his game, a little bit more speed in the tighter areas. It’s a bit different, but it actually makes Lizzo and my loads easier as far as skating, it helps us conserve a little bit of energy so that it can be used for more forechecking and more offense. It’s just a different look, you know, Arty is a pure shooter he likes to be high, in different areas and Grunny likes to be lower, in the paint and around the net and digging pucks. It’s a different look but it’s obviously one that works whether we play with Arty, Grunny or not together. I think our games always try to stay the same.

For his part, Grundstrom has appreciated the nature of that line, what they’re built around and what they’re about from an identity perspective.

There’s a clear way that line looks to play the game and even though their time together, as a trio, each member seems to be on the same way with their approach towards the game, which is a great thing to have sorted as a line.

“It’s been pretty good, I played a little bit with [Lizotte] last year too, so I kind of knew what to expect and we’re finding each other well so far, so it’s been good,” he said. “All of us want to play North-South and play directly. I think that fits us really, really well to play that way.”

As training camp progresses, we’ll assume that we’ll get at least another opportunity or two to see this line play together in full during the four preseason contests on the slate for this week. As the Kings look to prepare for Opening Night 11 days from today, finding game action for lines will be a focus as the team narrows down on a final roster.

It’s still early, and things could still change, but in McLellan’s eyes, there’s a spot to be had for the Lemieux – Lizotte – Grundstrom line. Now, it’s on them to seize it and maintain it through their play on the ice.”

“We think Grunny complements [Lizotte and Lemieux],” McLellan said. “They play, I call it a hunt game, they’re on top of teams, creating turnovers, buzzing, physicality and momentum. It can be really effective, we do trust them defensively, they do good job there. We believe they can be a real good line but when it really gets going, they’re going to have to live up to that. They’re very capable of it.” 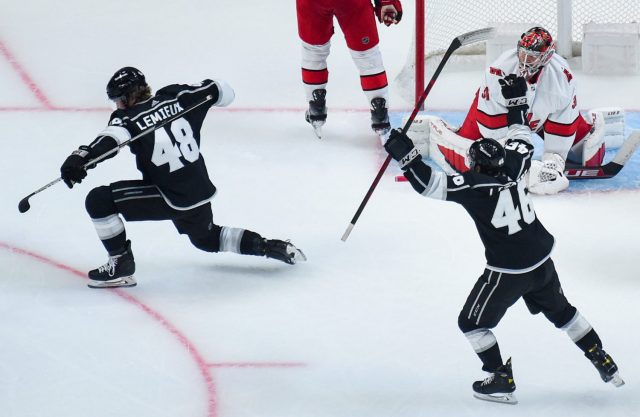