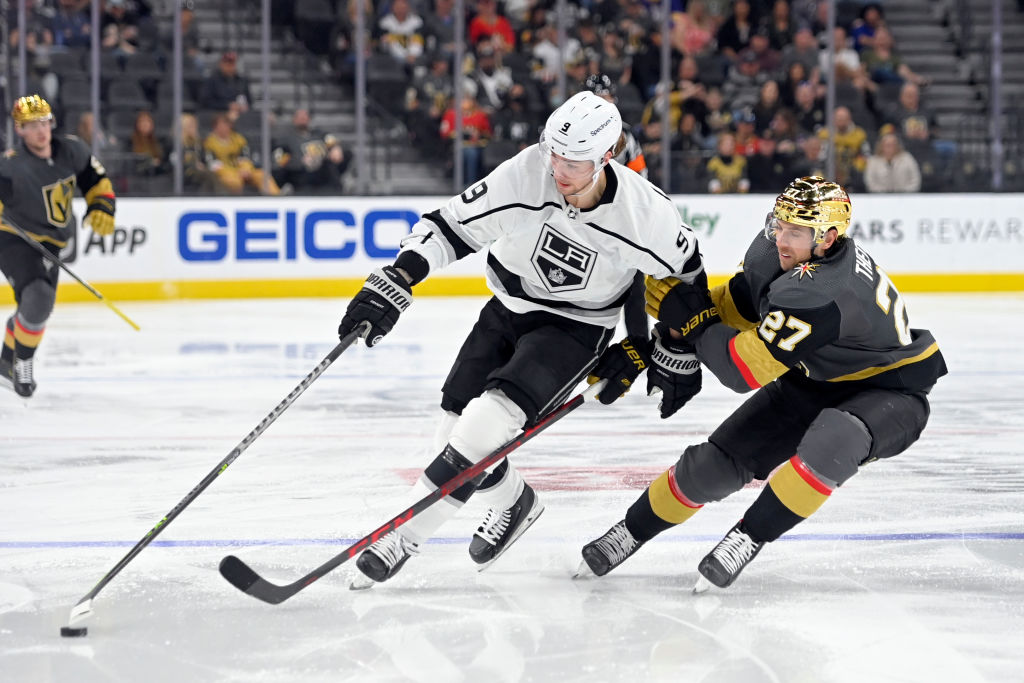 TONIGHT’S MATCHUP: The Kings will complete a preseason-opening back-to-back set this evening as they visit the Vegas Golden Knights at T-Mobile Arena.

KINGS VITALS: Below is tonight’s expected game group against Vegas –

As was the case yesterday, the team is expected to travel with one extra skater and in today’s case, an additional goaltender as well.

Today’s group will give us our first look at the team’s top forward line, with the trio of Kevin Fiala, Anze Kopitar and Adrian Kempe all projected to be in tonight’s lineup and they should skate together in Vegas. Beyond those three will be a group of forwards on the roster bubble, fighting for spots, as well as a few individuals playing in back-to-back games. On the backend, regulars Mikey Anderson and Alex Edler are slated to make their preseason debuts as the leaders of that unit.

Here’s how the team took rushes during morning skate today –

One other roster note – The Kings announced this morning that defenseman Angus Booth has been reassigned to the Shawinigan Cataractes of the QMJHL. Booth was a part of the traveling party to San Jose last night but did not play and now he’ll return to his junior team for regular game action. Booth was a fourth-round selection by the Kings in the 2022 NHL Draft and should play a sizeable role for the defending league champions this season. 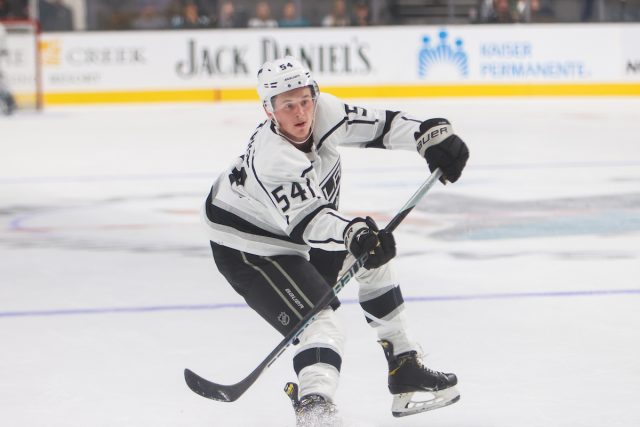 SAN JOSE, CA — SEPTEMBER 25 — The LA Kings face off against the San Jose Sharks at the SAP Center in a preseason game.

One Game, Two Game
The Kings will be using a few players on back-to-back nights here to begin the preseason, with forwards Lias Andersson and Akil Thomas, along with defenseman Brandt Clarke, going on consecutive days.

Speaking with Andersson and Clarke this morning, both individuals touched on the strange flow of last night’s game, which was filled with penalties, which created a challenge for players on both sides to really get into the flow of play.

Andersson – It was fun. It was a different game, a lot of penalties, so there was no rhythm in the first two periods. A little different, but I think we stood up pretty well In the first period, we struggled a bit with penalties and then we started moving our feet a little bit more and in the second and third, I think we should be pretty happy with it.

Clarke – Yeah, it was definitely not a standard flow, back and forth kind of game. They had a lot of pressure in the first period because we were killing the whole time and we had a lot of pressure in the second period because we were on the man advantage. That definitely gave our special teams guys a lot of practice and our kill was amazing, we barely gave them any shots, but our power play was definitely generating get some good shots off but unfortunately we didn’t bury any of them.

For those three players, it will also mark an early-season back-to-back, though in reality it’s a bit more than that, when you factor in higher intensity training camp scrimmages that took place Thursday through Saturday.

Andersson and Clarke are certainly excited for the additional game action and are making no excuses as they both look to put their best foot forward in an effort to make the NHL roster.

Andersson – It’s been five games here in five days [between camp scrimmages and exhibition games]. I’m just trying to do the best with it, do my stuff in the gym and make sure that I’m ready to play.

Clarke – With those three inter-squad games, and now two games in a row, it’s definitely going to be tiring after tonight, but they just want to see my consistency, that’s why they’re throwing me in there. I’m going to rise to the occasion, I’m not going to sit back or anything, I’m still going to play my game. I feel fine and I’m going to be ready to go.

Breaking JAD
One individual who is looking ahead to his preseason debut is forward Jaret Anderson-Dolan.

Anderson-Dolan is one of several players on the roster bubble, fighting for a spot with the big club. Anderson-Dolan has played in NHL games during each of the last four seasons, ranging from a cup of coffee as a 19-year-old at the beginning of the 2018-19 campaign to a career-high 34 games in the COVID-shortened 2020-21 season and seven more games last year.

The rest of Anderson-Dolan’s 2021-22 season was spent in breakout fashion with the AHL’s Ontario Reign, as he netted 24 goals and 47 points from 54 regular-season games. He featured as a key member of the team’s Top-6 and top power-play unit, with his offensive totals rising from his rookie totals in the AHL.

Now 23, and no longer waiver exempt, Anderson-Dolan has his sights set on the NHL club. The first step towards that is preseason contests, which are something that he looks forward to playing in.

“Yeah, definitely,” he said, when asked if he likes playing in preseason games. “I think for everyone, no matter what spot you’re in, for the guys that have been here, it’s getting your timing back and getting your game legs back and getting ready for the regular season. For guys that are competing for jobs, it’s just an opportunity to prove yourself, so I’m definitely excited.”

Anderson-Dolan’s words mesh with what Todd McLellan said in advance of the first two games, which is that these are games of opportunity for many here in camp. That certainly applies to Anderson-Dolan, who left last season with a message from the coaching staff, with a goal of improving his puck protection during the offseason.

“Puck possession and protecting pockets was the big focus this summer. It’s something they talked about with me at my exit meeting and I think I’ve gotten a little bit better at it over the summer. Now, it’s just translating that into my game and these preseason games.”

With the way the Kings aim to play, those are areas of emphasis that could bolster Anderson-Dolan’s chances of making the opening-night roster. We’ll likely get our first glimpses of those changes this evening in Las Vegas.

Spence was one of the organization’s best stories amongst younger players last season, as he burst onto the scene in a big way. Originally slated to be eased into professional hockey as a rookie at the AHL level, Spence went on to not only dominate in the minor leagues – being named to the AHL’s First All-Star Team – but also make his NHL debut, as he appeared in 24 regular-season games as well as three during the Stanley Cup Playoffs.

Moverare was another positive storyline, as he rose from the AHL to play an important role for the Kings down the stretch. Though he plays with less of an offensive mindset, and undoubtably less flash, than Spence does, he was perhaps just as effective playing his own game. As a reliable, stay at home option, who rarely hurt his team, Moverare was a positive presence when the Kings were depleted at times on the backend.

Both individuals now find themselves in roster battles here during training camp. With all of the injuries the organization faced last season, the Kings now have more players with NHL experience than they have NHL roster spots. That presents the opportunity to compete for jobs during training camp, with both young blueliners hopeful of doing exactly that.

Spence on if his approach has changed coming into camp off a year with NHL experience
I think it just comes with the experience from last season. Luckily for me, I played 24 games, so for me to have that experience, I just want to bring that into camp and showcase what I can bring. I think I’m more confident this year, and it’s my goal to make the team, so we’ll see how it goes.

On having the rampup of rookie camp, heading into main training camp
I only had one game [at the Rookie Faceoff], but to have that five on five game, that pace, it got me a little bit more prepared than maybe the other guys, because I’m just used to fast play. I think it was good for me to come into main camp and have all of that conditioning.

On having the confidence to play his game and not being afraid to make mistakes
No one’s perfect, everyone makes mistakes, but I think it’s just the guys who bounce back and become better with that. For me, I know what I have to do to become a better player, I know my weaknesses. I’m just trying to do the best I can to fix those [during camp] and go from there in the future.

Kings and Golden Knights, tonight on NHL Network! The team will be back to practices tomorrow, with Group A currently scheduled to hit the ice at 11:30 AM at Toyota Sports Performance Center.