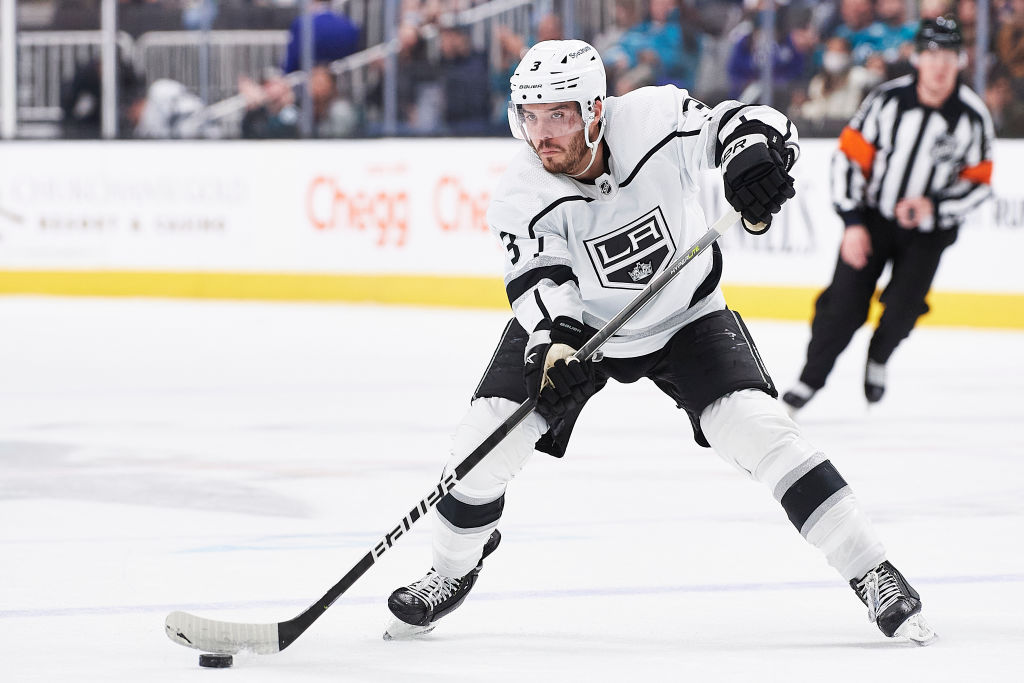 TONIGHT’S MATCHUP: The LA Kings begin their 2022 preseason schedule later this afternoon in San Jose at SAP Center with a matchup against the Sharks. Today’s contest is the first of seven total exhibition games, with three coming on the road, two at neutral sites and two at Crypto.com Arena.

HEAD-TO-HEAD: The Kings and Sharks met once during the 2021 preseason and four times during the 2021-22 regular season. Last season, the Kings skated to a 4-3 victory in San Jose during last season’s preseason opener, with Lias Andersson – who is expected to play this afternoon – amongst the scorers.

KINGS VITALS: The Kings are projected to have the following skaters traveling to San Jose for tonight’s preseason action –

Naturally that is one player too many, but an extra player for precautionary reasons makes sense.

A young group is expected for tonight, though a group that will be headlined by veteran goaltender Jonathan Quick. As was the case last season, Quick will be a part of the team’s roster for the preseason opener. The veteran turned aside 18-of-19 shots faced in San Jose last season in just over half a game’s work, and looked very sharp in doing so. Quick’s partner in net will be Matt Villalta, who could also see action against the Sharks.

The group of skaters includes nine players who saw NHL game action last season, including six who played in games during the Stanley Cup Playoffs. Assume we’ll see three players wearing an “A” in today’s game, with Anze Kopitar not among those headed North.

Additionally, the Kings announced the reduction of the training camp roster earlier today, as they reassigned six players to their junior teams. Forwards Eric Alarie, Riley Fiddler-Schultz, Kaleb Lawrence and James Stefan along with defenders Landon Kosior and Marc Lajoie will all join clubs in the WHL. LA now has 57 total players on their training camp roster including 33 forwards, 18 defensemen and six goaltenders.

Preseason Roy-alty
Coming off another season that consisted of “Steady Eddie” type play, Matt Roy is ready to get back at it with more of the same here in training camp.

Looking at today’s projected roster, Roy is one of the few “veterans” who will be in action in San Jose. Roy now has more than 200 games of NHL experience and while that is still on the low end when you compare it to some of his more veteran teammates who are not in action today, he’s certainly cemented himself as a regular in the LA Kings lineup and in these early preseason contests, one of the more veteran players taking the ice alongside several rookies and up-and-comers.

Being the first game of the exhibition slate, today will be Roy’s first taste of exhibition action, following three full days of camp. Roy detailed pace and physicality first and foremost when comparing summer skates to training camp, and now into preseason action.

“Pace, physicality, positioning, I mean, sometimes in games, you just trust the guy to be on the right position, but in summer it’s as a kind of looping all over the place,” he said. “There’s more structure now and in that sense, it makes the game a little bit easier, but at the same time, the pace, is the physicality of the stakes.”

Roy has partnered with Sean Walker throughout the first few days of training camp, though for today’s contest in San Jose, Roy is expected to play while Walker is not. Roy will likely partner with a younger defenseman this evening in San Jose and enters this evening as the most veteran defenseman on the roster.

That will make for a good, early introduction for Roy, who is hopeful to continue to develop as a leader on this team.

“Yeah, I think naturally, the guy like Brownie leaving kind of leaves a hole on the team and it doesn’t have to be one person stepping up,” Roy said. “I think, us as a group, everyone can step up and contribute in different ways and fill the void that way.”

Brand-t New Season
Training camp isn’t even a week old, but there’s no doubt that rookie defender Brandt Clarke has turned a lot of heads already in his first opportunity with the big boys.

Clarke was unable to compete in last year’s training camp and exhibition season due to illness, otherwise he would have probably already made his NHL preseason debut. With his name on today’s game group roster, it looks like today is the first time we’ll get to see Nepean, ONT native on the ice in an NHL arena.

With three days of main camp in the books plus three games at the Rookie Faceoff in San Jose, one of the people impressed with Clarke is Kings head coach Todd McLellan.

“Everything about him so far has been real positive,” McLellan said of his team’s 2021 first round pick. “The game that got Brandt here is the game that we’re seeing right now. He’s a cerebral player, he sees things, he anticipates well, he’s a great passer, he does play with some risk in his game, which isn’t a bad thing, and he’s very competitive.”

Clarke starred in last week’s Rookie Faceoff with four assists in three games as well as a game-winning shootout goal and 11 total shots on net, which was the most of any player among the six teams participating in the event.

“He’s going to learn a lot of the tricks of the trade, but he’s also going to teach some of those too because he has some things in him that some others don’t,” McLellan said. “His strength, fitness and conditioning are at a very elite level for junior and it has to get better for the pro level but that’s called being an underage player.”

The right-shot defenseman is gunning to make the Kings roster for opening night next month and his performances during the preseason will be a good indication of his readiness for the NHL.

Thomas The Tank Engine
Forward Akil Thomas, who was injured last year and missed the entirety of training camp along with the first seven weeks of the 2021-22 AHL season, is also expected to get a chance to showcase himself today in the Kings preseason opener.

Thomas was in Group A for Saturday’s training camp practice and scrimmage on a line with Lias Andersson and Samuel Fagemo before he scored the final shootout goal to give his side the decision. The former second-round selection in the 2018 NHL Draft got a head start to the preseason by appearing in two contests at the 2022 Rookie Faceoff last week in San Jose, posting and assist and eight shots on goal.

After Saturday’s session, Thomas said he was excited to hopefully get an opportunity to hit the ice in a Kings jersey for game action again.

“These scrimmages are game-like, but they’re not a full game in a full barn and stuff like that,” Thomas said. “If I’m playing, I’m excited to get back into action and show what I can do.”

“The biggest thing for me is that I feel prepared,” Thomas said. “That just gives me a little bit more confidence and that’s probably something I didn’t have last year because I wasn’t prepared, I didn’t skate once. It was tough coming back off of injury and especially coming back and then injuring my foot. It definitely took a while to get my legs back, but I feel really confident and I’m getting some good habits early on and trying to build off it.”

Thomas made his debut with the Reign on December 4 last season and hurt his foot in his second game on December 10. After missing another six weeks, he returned for the second time on January 22. He went 10 games before registering his first point of the season with an assist in early February and didn’t score until March 26, but once Thomas found the back of the net, that got him going.

He finished the year with eight goals in his final 14 games and then scored four more in just four playoff appearances. After a full offseason of strength training and hard work both on and off the ice, Thomas said his approach is to try and not overthink things, just aiming to stay focused and let the game come to him.

“I don’t have a stern approach because in the past, maybe I’d be thinking I’ve got to do this or that and be a little bit nervous,” Thomas said. “For me it’s just about showing up to the game. I’ve done my work in the offseason to be prepared so I’m just going to pay attention to the video beforehand and make sure I’m playing well defensively and the rest will kind of happen.”

Kings and Sharks, coming up at 4 PM in San Jose. No television coverage this evening, but the dynamic duo of Nick Nickson and Daryl Evans will have you covered via radio.