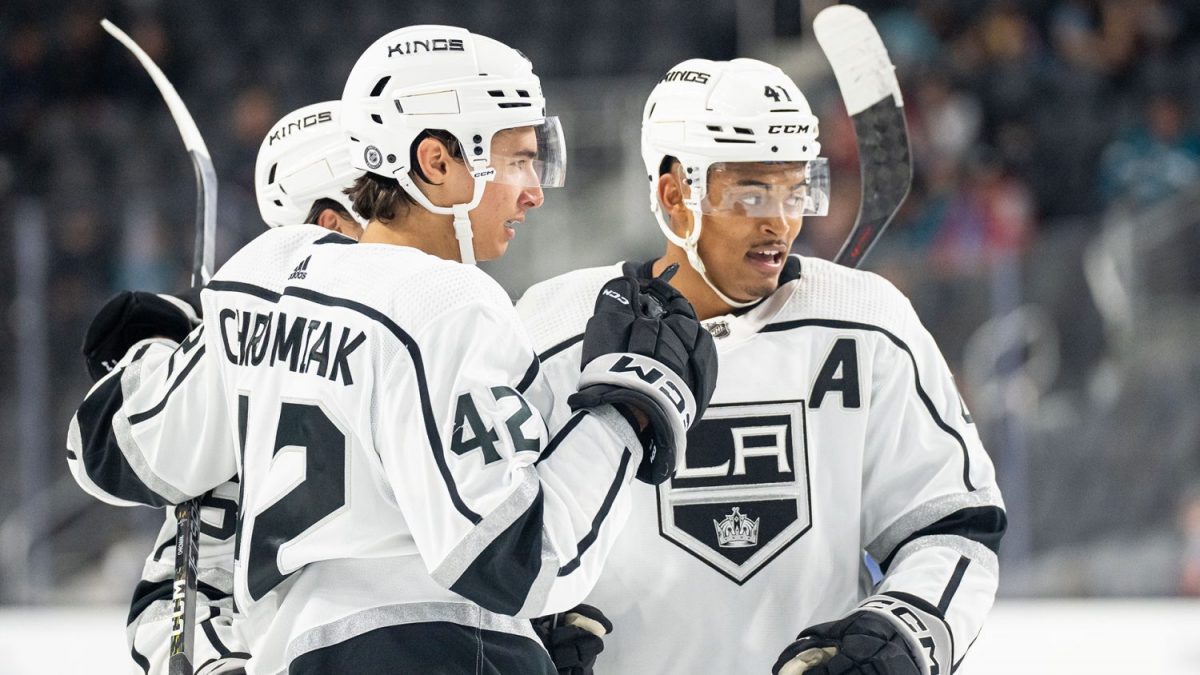 *Note – Live stream expected at 3 PM – Stream is Los Angeles and San Jose television markets only, may be blacked out in other markets

Third Period
19:47 – Another PK completed for the Kings to begin a period. The whole group has done a great job on the penalty kill this week.
16:09 – The Sharks have hurt themselves with penalties today. Mayer goes off for the second time, this one a cross-checking minor resulting from a takedown of Byfield.
11:49 – An open look for Akil Thomas was snagged by the glove of Gaudreau. Good opportunity and overall shift for Thomas in his second game of the rookie event.
5:57 – The Kings, led by Hrenak have done a nice job with the lead in the third period. They’re continuing to push for chances, but not getting caught with long shift lengths.
1:10 – LAK Goal, Jamsen. After a blocked shot by Byfield, Jamsen adds his second goal of the day into an empty net to seal the game for the Kings. Tyler Madden, the third member of the line, earned the primary assist.
0:00 – A combined shutout for Ingham and Hrenak gives the Kings a lot to be happy about as they head back to Southern California tonight with wins in two of their three games at the 2022 Rookie Faceoff.

Second Period
19:18 – LAK successfully finished off PK number two. Still searching for our first goal of the game as we continue in the middle period.
16:00 – LAK Goal, Stefan. A bouncing puck that exited the LAK zone set up a rush chance for James Stefan, who shoved a defender out of his way before making a move to his backhand and putting the puck up high and into the net. 1-0 LAK.
12:12 – James Stefan’s not done yet. He came down the left wing on a rush into the offensive zone and drew a holding penalty on San Jose’s Artemi Kniazev. Kings to the PP.
9:51 – David Hrenak replaces Jacob Ingham in goal. The two planned to split today’s game. Ingham finished with nine saves during his portion of the action.
7:46 – The Kings just haven’t been able to get things going on the power play today. After scoring man-advantage goals in each of the first two games of the event, another chance fell short on a cross checking minor that was called on Samuel Mayer.
5:11 – LAK Goal, Jamsen. Starting with a save by Hrenak, Byfield picked up the puck and was unable to connect on a long feed to Jamsen, but he won the race to the puck and stuffed a backhand wraparound into the net to make it a 2-0 game.
1:04 – Mark Liwiski knocked over Brandt Clark near the backboards in the Kings zone and was whistled for boarding. Clarke was slow to get up but did return to the game and saw action on the power play. Unfortunately for LAK, it was another unsuccessful man-advantage.
0:47 – Another scrum near the SJ net boiled over and saw gloves litter the ice. Penalties went to Max McCue for SJ and Kaleb Lawrence for LA. Lawrence was given an extra two minutes for elbowing, putting the Kings on the penalty kill for the rest of the period.
0:00 – The Kings outshot SJ 12-5 in the second period and now have a two-goal lead with 20 minutes remaining.

First Period
20:00 – The Kings third and final game of the 2022 Rookie Faceoff is underway!
16:55 – Sharks have come out fast, putting pressure on LAK in the opening minutes. Jacob Ingham has had to make 3 saves in the early going.
15:54 – A quick response from the Kings top line worked the puck back into the SJ end. Led by Byfield, who is looking comfortable here, LAK has their first chances on goal at SJ netminder Benjamin Gaudreau.
14:04 – Kaleb Lawrence got the best opportunity early on for LA, finding himself open for a point-blank look on net that was turned aside.
13:05 – After a nice left pad save by Ingham the Kings took the puck the other way and created another offensive chance that resulted in a holding penalty on San Jose’s Artem Guryev.
10:11 – LAK came up empty on their first PP opportunity. The game has had an extra edge to it early on, with multiple scrums having to be broken up after whistles.
9:15 – Helge Grans just had a shot from the point glance off the crossbar before going up and over the net. Still a scoreless game early on with shots on goal even at 6-6.
8:07 – A high hit by Guryev on Tyler Madden was called for elbowing. Another chance for the Kings on the man-advantage in the opening frame.
6:03 – A single shot on goal was all the Kings managed with their second extra-man opportunity.
4:28 – Francesco Pinelli was called for a penalty on a heavy hit, giving San Jose its first power play of the day.
1:32 – Just like they did on Saturday, the Kings were up to the task on the penalty kill, keeping the Sharks away from the front of the net. But also like Saturday, LA has taken a second consecutive penalty, this one for hooking on James Stefan.
0:00 – 28 seconds still remain on the penalty to Stefan, but it was another good start to the penalty kill for LAK to end the period. Overall not too much action in the first, but the physicality of the two teams is definitely something to keep an eye on moving forward.