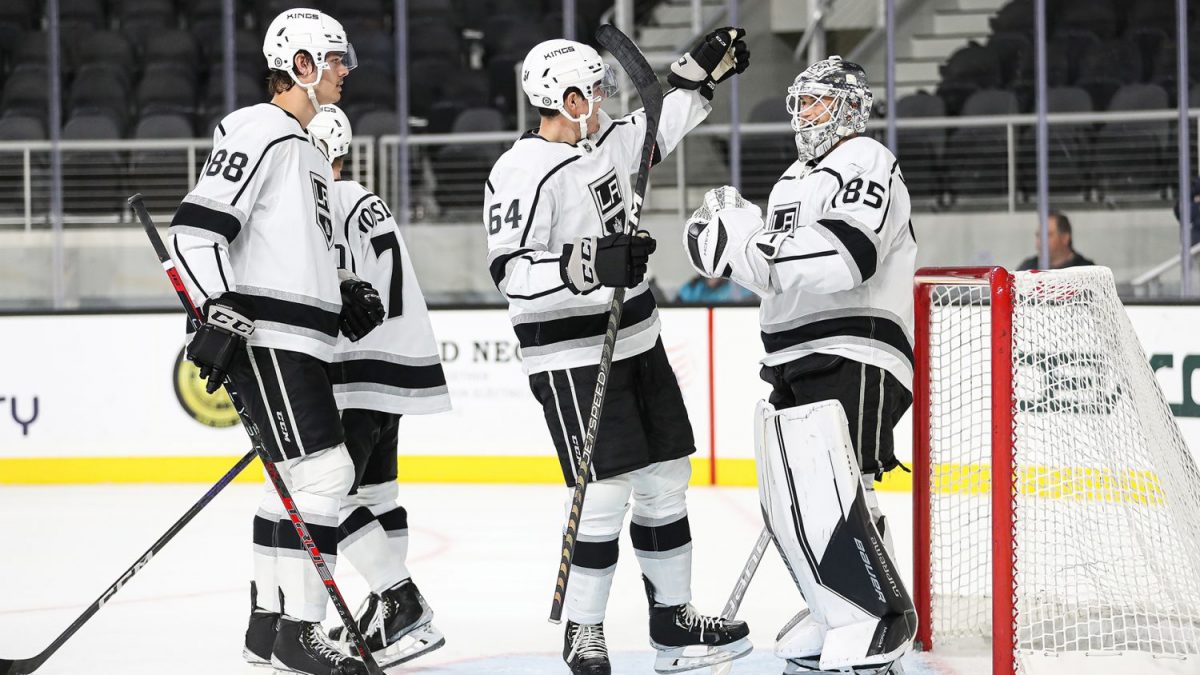 The LA Kings concluded the 2022 Rookie Faceoff on Monday with a 3-0 shutout victory over the San Jose Sharks. Goaltenders Jacob Ingham and David Hrenak combined to blank the showcase hosts in the finale.

The first period was evenly played and there weren’t many chances for either side. Both teams strongly finished checks and each killed off a pair of power plays.

James Stefan, a camp invite and Laguna Beach native, opened the scoring for the Kings four minutes into the second period. The puck was played over the Sharks’ blue line where Stefan attempted to corral it. He cut between two defenders, shrugged them off, collected the puck and backhanded it past Sharks goalie Benjamin Gaudreau to complete a fantastic solo effort score.

Aatu Jamsen doubled the Kings lead ten minutes later. Quinton Byfield attempted to connect with Jamsen on a stretch pass through the neutral zone but led him slightly too far. Jamsen chased the puck into the Sharks zone, wrapped it around the net and slid it past the goalie for his first goal of the showcase.

The third period was relatively clean after a chippy and penalty-loaded first 40 minutes. The Sharks made a late push to get on the board with the goalie pulled for the extra attacker, but the Kings continued to block shots and take away chances. After being set up by Byfield and Tyler Madden, Jamsen rifled the puck into the empty net for the dagger and his second goal of the game.

The Kings ended the 2022 Rookie Faceoff with two wins in three games and were a perfect 12-for-12 on the penalty kill.

1. Somehow, this was Brandt Clarke’s best game of the Rookie Faceoff. He led all skaters with 4 points (all assists) through two games but was kept off the scoresheet against San Jose. However, Monday’s contest might have been his most complete game of the showcase despite not scoring. He heavily contributed to the Kings’ offensive zone play and was strong on the back end. He didn’t shy away from blocking shots and taking away passing lanes and was once again reliable in the final minutes of regulation. Head Coach Marco Sturm remarked after the game that he thought it was Clarke’s most impressive game of the week.

2. Aatu Jamsen finally broke through. The Finnish 20-year-old started all three games skating on LA’s top line. He played with multiple different players and swapped lines mid-game once or twice, but finally found the back of the net in the final game. The coaching staff seemed to give him good opportunities this week and he cashed in twice in the finale, in what was his most impressive game by far.

3. The Kings’ prospects are in good hands. Marco Sturm was handed the reins of the LA’s American Hockey League affiliate in Ontario this offseason, and this weekend, he was given his first real opportunity to lead the prospects as a head coach. With Ontario assistant coaches Chris Hajt and Brad Schuler accompanying him behind the bench, Sturm led the Kings to two wins against some of the NHL’s top young prospects. He is already familiar with the organization’s system, having served on Todd McLellan’s staff with the Kings the past few seasons. As you can see/hear below, Sturm relished the opportunity to coach some of his future AHL players and they were eager to work with him for the first time this weekend.

Now, hear from Clarke, Madden, and Sturm following the victory.

Brandt Clarke
On trying to contribute to the offense on every shift
It’s cool that I’m at this high level right now [offensively]. I think [my opponents] know that if I have time and space, I’m going to try to make something happen. They can have the chance to keep me down but I’ll keep bouncing back up. I’m not going to stop playing my game. I’m still going to do the same thing next shift.

On meeting his expectations for the Rookie Faceoff
I think I showed off my offensive abilities but also showcased my two-way game. They put me on the penalty kill a lot. I blocked a lot of shots, showed off my good defensive stick, and was winning battles in our own zone. These are all things on the checklist that I wanted to come in and show. I’m restoring my repertoire and I think I did that pretty well. I’m happy with how the weekend went overall.

Tyler Madden
On how his time at the Rookie Faceoff measured to his expectations
I came in kind of a leader here, so I was just trying to lead by example and show the younger guys the way. We all learned a lot before coming into this and it’s kind of hard to get everything right, but I felt like we played strong in the two games I was in. We won that second game too, and I think it was a good weekend. I think a lot of the guys are starting to understand the system a lot more now.

On his overall play this week
I didn’t come here thinking I’d like to get as many points as I can. I’m just trying to get my feet under me for main camp and just play a strong, hard, two-way game. But I did get a couple of points here. It was a good weekend for us, for sure.

On playing under Marco Sturm
I loved it. I think he ran the bench really well. He’s one of those guys that when he talks, you listen. It was good having him behind the bench and I think we’re going to have a great year with him in Ontario.