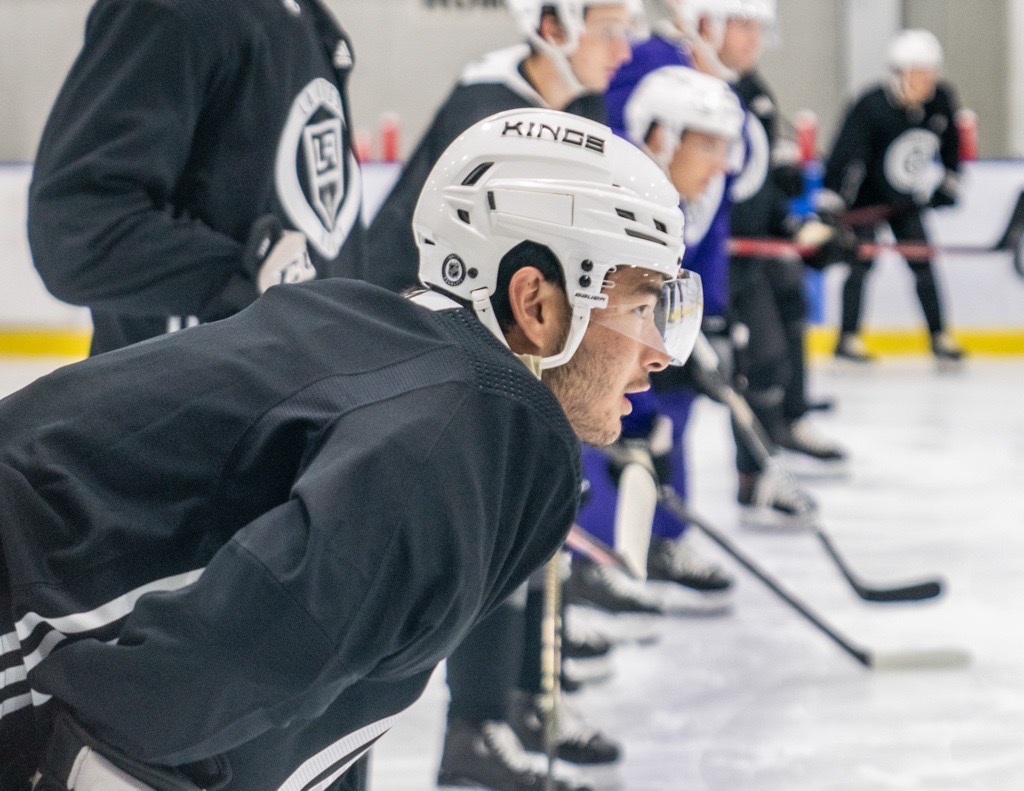 The LA Kings rookie roster practiced at Sharks Ice on Sunday in San Jose. The team will conclude the 2022 Rookie Faceoff on Monday at 3 p.m. against the Sharks.

LA is fresh off a 5-4 shootout victory over the Vegas Golden Knights on Saturday afternoon. The team erased multiple 2-goal deficits and was perfect on the penalty kill. Akil Thomas and Brandt Clarke scored for the Kings in the shootout and goaltender David Hrenak stopped both Vegas attempts he faced.

Clarke has paced the Kings with four points, all assists, through the first two games of the Rookie Faceoff. Taylor Ward has goals in both games and Martin Chromiak scored twice in the third period against Vegas.

CHROMY AGAIN!@MatoChromiak8 knots it up at 4 👀

The forward lines and defensive pairings have rotated quite a bit the last few days, and we’re expecting some additional lineup changes for tomorrow’s game against San Jose. For what its worth, here is how the squad skating at practice today.

King Size Kaleb
Saturday’s game was the first time Kings’ fans will have seen 2022 seventh-rounder Kaleb Lawrence in a legitimate game situation. In fact, it was some of his only game action since 2020. Lawrence suffered a terrible shoulder injury a year ago, and pair that with a global pandemic that canceled the 2020-21 OHL season, and the 6-foot-7 forward hasn’t had many games to play in lately. He was selected 215th overall in this year’s draft but was a limited participant at Kings Development Camp this summer. Now he’s back to full contact and into the lineup.

“I’ve had a couple years off, but getting back into it, I’m feeling good,” Lawrence said. “I think this is a good opportunity for me to get my feet wet here in this organization and hopefully just keep building.”

He settled in nicely after the first period Saturday while skating with two other big forwards, 6-foot-6 Samuel Helenius and 6-foot-4 Bennet Rossmy.

“The first period was a little tough just getting back into it,” he said. “I made a couple of turnovers but as the game went on, I felt a lot better. I was playing with two good players, so it made it a little easier for me to make some plays and I felt a lot more comfortable in the second and third periods.”

As noted above, that line skated together at practice this morning and we might see them again in tomorrow’s game.

The Real Deal
Akil Thomas was recovering from an offseason surgery last year and did not participate in the 2021 Rookie Faceoff in Arizona. He’s back with the Kings rookies this season and centered LA’s top line on Saturday after sitting out the Colorado game.

“It took a couple shifts from my legs to get back into it,” Thomas said. “It definitely felt like my first game for the first couple of shifts, but overall it was a pretty good game and I had fun.”

Thomas struggled to get going early on in the AHL after recovering last season, but he exploded in the final few weeks of the season. He recorded 11 points (8 goals, 3 assists) in his last 14 regular season games and scored 4 goals in as many playoff games for the Reign. This weekend, he’s not setting expectations for himself.

“My last time doing the rookie tournament was in 2019. It’s been a couple years so I didn’t really have any expectations,” he said. “I just want to try to be the best version of myself and help lead the team.”

He is also expected to return to the lineup Monday against San Jose.

After practice, the rookies participated in a team bocce ball tournament, that also included the coaching staff.

The @LAKings rookies are now playing in a bocce ball tournament. The coaching staff defeated the goalies 10-0 and are now the early favorites to win it all. pic.twitter.com/INR693yS0v

The Kings conclude the 2022 Rookie Faceoff on Monday at 3 p.m. against this year’s hosts, the San Jose Sharks. You can watch the game live on LAKings.com/stream.