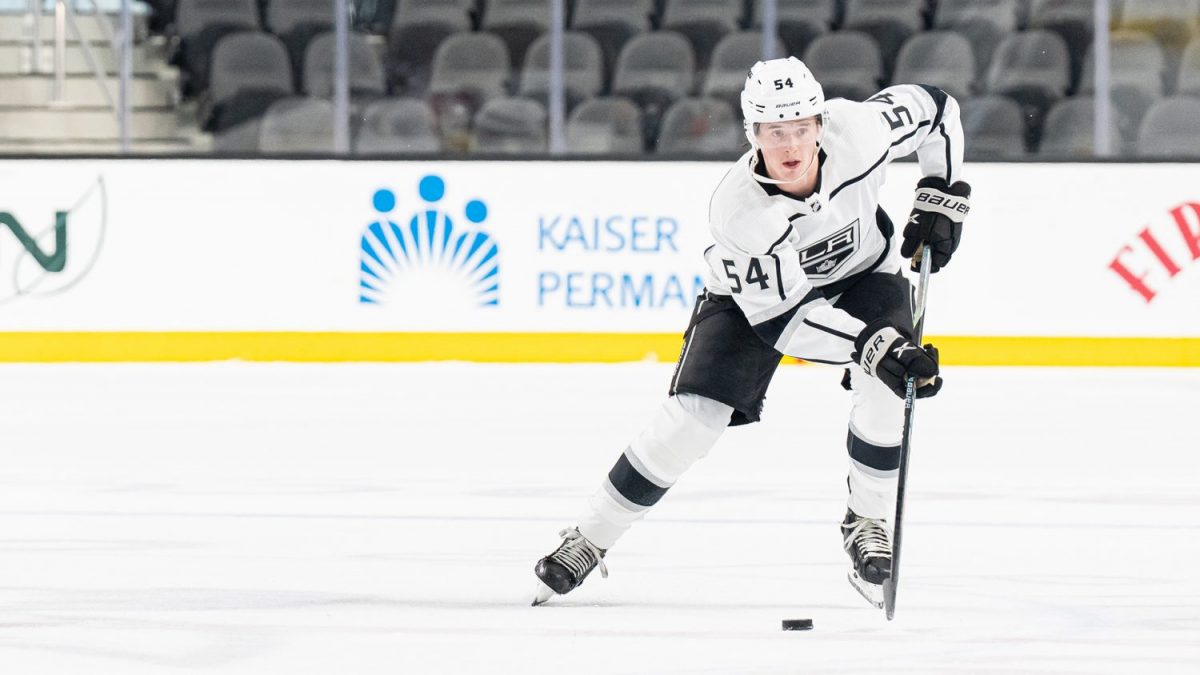 *Note – Live stream expected at 2 PM – Stream is Los Angeles and Vegas television markets only, may be blacked out in other markets

Overtime
5:00 – Kings begin overtime with a 4-3 power play and plenty of time to work with.
0:00 – Tons of chances for LAK with the extra man, with the entirety of the overtime period played in the Vegas end. Pinelli hit the post in the closing seconds, but no one could bury the dagger and the game heads to a shootout.

Third Period
20:00 – Action is underway in the third. LAK will look to put some pressure on Vegas and get back in the game.
12:41 – LAK Goal, Chromiak. The Kings earned themselves extended zone time in the VGK end and Chromiak pounced on a loose puck, putting it past goaltender Jesper Vikman. Brandt Clark picked up his third assist of the week, while Aatu Jamsen had the primary helper.
10:56 – Kings draw a penalty on Matyas Sapaovaliv and earn their third PP of the game.
9:58 – LAK Goal, Chromiak. 2 goals for the young Slovakia native in less than three minutes has the game level at 4-4! Assists on the strike went to Clarke and Akil Thomas.
9:10 – Penalties to Riley Fiddler-Schultz for tripping and Justin Nachbaur for elbowing have the Kings shorthanded for the first time today, a 2-minute 5-on-3. LAK elected to use its timeout to prepare for the penalty kill.
6:50 – Kings do an excellent job while shorthanded, limiting Vegas chances. Highlights were blocked shots by Inamoto and Clarke, while Helenius and Spence logged time as well. But Inamoto was called for interference and VGK goes back on the power play.
4:40 – Another top-notch penalty kill for the Kings has them back at even-strength with under five minutes remaining in regulation and tied, 4-4.
3:28 – Kings are called for too many men on a pass that was sent near the bench area while defenders were changing. Vegas goes back to the PP in an attempt to break the tie.
0:21 – 4 straight late penalty kills have kept the Kings in the game. Excellent team effort in the third period.
0:00 – As time was expiring, Vegas forward Carter Souch took down Brandt Clarke and was called for a match penalty for illegal check to the head. The Kings have a power play for the entirety of the 5-minute overtime.

Second Period
20:00 – The Kings start the second period on the power play for 1:56, looking to build off a few late chances they had at the end of the first.
15:55 – Golden Knights Goal, Mason Primeau. A seam pass found Primeau open in the slot for a quick shot that beat Hrenak five-hole. Vegas extends the lead to 2-0.
13:07 – LAK Goal, Rossmy. The Kings get on the board with a strike by Bennet Rossmy, who was left wide open in the low slot. A lone assist on the play was credited to defender Landon Kosior.
9:20 – Nice save by Hrenak on a rush chance from the left circle that hit his shoulder and then glanced off the post and out of play.
7:33 – LAK Goal, Ward. Left with plenty of space in the corner, Ward centered the puck for Brett Kemp and it glanced off a Vegas stick and into the net. Linemates Pinelli and Kemp record assists on the tying goal that has us tied up at 2-2!
5:00 – In an attempt to put the Kings in front, Akil Thomas just rang a shot from the right circle off the post.
1:42 – Golden Knights Goal, Landon Ahac. The blueliner found open space on the left point and wristed a shot up high over Hrenak’s glove to regain the lead for Vegas.
0:24 – Golden Knights Goal, Connor Corcoran. A shot that changed direction in front of a screened Hrenak fluttered into the back of the net and put Vegas on top, 4-2.
0:00 – Tough end to the period for the Kings, who played well and had a 14-7 shots on goal edge in the frame, but allowed three tallies and trail by a pair going into the third.

First Period
20:00 – Game 2 of the Rookie Faceoff is underway!
16:58 – Nice glove save by Hrenak on a good rush chance for Vegas. The Golden Knights have produced the first few shots on goal early on.
14:34 – Taylor Ward stood out yesterday and he’s had a fast start again today. His first two shifts have produced multiple chances and he’s been physical as well, throwing his body around in the offensive zone.
12:00 – Golden Knights Goal, Lyndon McCallum. Found a loose puck at the side of the net after an initial save by Hrenak and shoved it home to put Vegas ahead 1-0.
7:43 – Vegas defender Layton Ahac grabbed the puck off a faceoff win for the Golden Knights and took it all the way to the net before being stopped by Hrenak.
7:39 – Kings forward Justin Nachbaur dropped the gloves with Mason Primeau, resulting in the first penalties of the game for both sides. Nachbaur will play his second pro season on an AHL contract with AHL Ontario, after spending time with AHL Charlotte and ECHL Greenville last year.
6:12 – Connor Corcoran takes a Vegas penalty for interference and the Kings have their first PP of the day.
4:52 – The LAK unit of Thomas, Ward, Chromiak, Spence and Clarke worked the puck very well on the man-advantage, giving fans a good look towards the team’s future offensive talent. There were unable to score, however.
0:51 – Good 2-on-1 look for Chromiak and Rossmy. Chromiak elected to shoot and Rossmy wasn’t able to corral a loose rebound.
0:04 – In the final seconds of the period, Corcoran called for slashing the stick out of Helenius’ hands. The Kings will open up the second period with their second power play chance.
0:00 – Vegas takes a 1-0 edge into the first intermission. A pretty even period saw an even total of 12 shots on goal for each side.