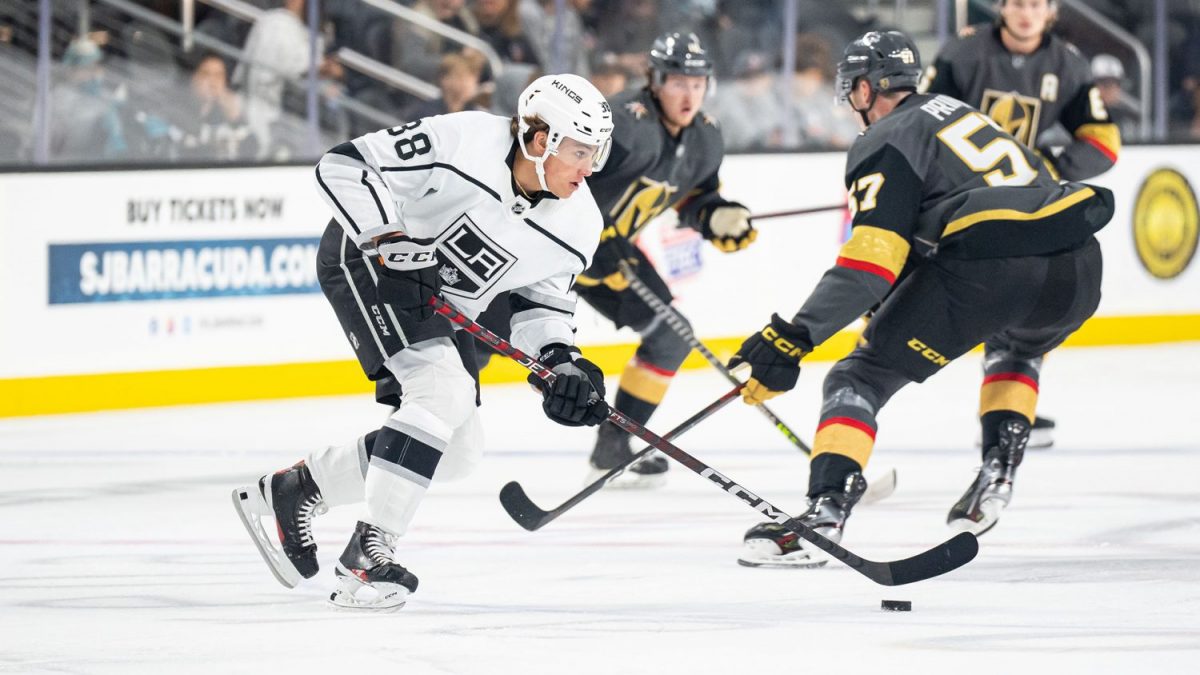 The LA Kings came from behind to defeat the Vegas Golden Knights 5-4 in a shootout Saturday in San Jose. The Kings erased multiple two-goal deficits and were perfect on the penalty kill again.

Today’s game was immediately more physical than Friday’s against Colorado, as both teams threw checks early and often. Vegas opened the scoring eight minutes in after Kings goaltender David Hrenak saved a shot from defenseman Layton Ahac, but allowed a rebound that bounced to Lyndon McCallum. The forward deposited the puck into a virtually empty net to put the Knights ahead.

Mason Primeau scored early in the second period to double the Golden Knights’ lead, but two Kings invitees connected shortly after to put LA on the board. Defenseman Landon Kosior nicely held the puck in the offensive zone along the right wing boards, skated toward the circle, and found Bennet Rossmy all alone in the slot, who fired the puck past the goalie.

Taylor Ward recorded his second goal of the weekend minutes later. He centered the puck for Brett Kemp, who was crashing the net, but it deflected off a Vegas defender and into the goal to tie the game.

Ahac and Connor Corcoran scored consecutively in the final two minutes of the period for the Golden Knights to take their second two-goal lead of the game.

Martin Chromiak brought the Kings back in the game in the third period. After a spell of extended offensive zone time, Chromiak found a loose puck and flicked it past Vegas goaltender Jesper Vikman. Three minutes later, the Kings earned a power play and Chromiak cashed in again to tie the game. He was fed in the high slot by Clarke, then quickly turned and snapped a shot past the goalie.

As time expired in regulation, Vegas forward Carter Souch drilled Clarke and was given a match penalty for an illegal check to the head. The Kings spent the entire five-minute overtime period on a 4-on-3 power play but were unable to score, despite constant pressure.

Akil Thomas shot first for the Kings after Hrenak opened the shootout with a save against Jordan Gustafson. Thomas opened up the goaltender and slid the puck into the net to put the Kings ahead. In the second round, Hrenak made another big save, sprawling in front of the crease and stacking his pads to deny Brendan Brisson.

It was fitting that Brandt Clarke was tasked with shooting second for the Kings. He slowly skated to the inside of the right circle and wristed the puck between the goalie’s legs to win the game. Clarke promptly skated to the left corner of the rink, opened to the door himself, and walked off the ice. Smooth.

1. Martin Chromiak’s scoring touch is the real deal. He led the Kings with 3 goals at the Rookie Faceoff last year in Arizona, and he did not waste much time finding the scoresheet this year. He has been impressive nearly every time he has skated for the Kings organization, either at the Rookie Faceoff or in his two AHL appearances with the Ontario Reign in 2021. All he did today was score twice in the third period to tie the game and was a constant threat on the power play. He didn’t get too many good looks on the power play in overtime, but he still played a crucial role in the offense today.

2. Jordan Spence looked as calm and collected as he has ever been. Last year’s Rookie Faceoff was a showcase for Spence. His speed, passing and quick shot took a lot of people by surprise. Then-head coach John Wroblewski even remarked that Spence’s offensive pressure often surprised his teammates and might have caused them to get called offside a few times. Not anymore. In his 2022 Rookie Faceoff debut, Spence commanded the puck, was great in possession, and was very composed. He was a First Team All-Star as an AHL rookie last season, played 24 games for the Kings, and even appeared in multiple Stanley Cup Playoff games. He probably won’t be surprising you with his abilities anymore.

3. The penalty kill has been perfect. Literally. The Kings are 9-for-9 on the kill through two games this weekend. Not only did the PK unit not allow any goals, but they barely allowed any shots on four Vegas power plays today. If Samuel Helenius cracks the NHL lineup someday in the future, his penalty killing abilities might be a reason why. He’s big, physical, and has a long reach that allows him to take away passing and shooting lanes. Defenseman Tyler Inamoto was exceptional today as well. He finished top-5 in the NCAA in blocked shots as a junior and senior at Wisconsin. Today he dove left and right to prevent shots on goal.

Martin Chromiak
On making the third period comeback
Obviously we were down 2-0, tied it up, and then they scored another 2 goals, so it was a good third period from us. We scored two goals but we had other chances too. We didn’t score the fifth goal but we won in the shootout.

On readjusting to the speed of the Rookie Faceoff
The first period was hard for me. I had to get used to the faster and more physical game, but I think that the third period was good from my side. I didn’t expect it to be that fast but I’m just glad that it happened. This was my first game with [Akil Thomas and Aatu Jamsen] too. I didn’t know Aatu before but he’s a great player, same as Akil, so I think we found a good chemistry on our line and we played a great game.

On being a leader on this year’s squad
It’s an honor. Marco Sturm, [Chris Hait] and Todd [McLellan] told me that I was going to be one of the leaders for this rookie tournament. For me, I just want to lead by example, on and off the ice, and try to show the younger guys what to expect and what to do.

The Kings have an off day tomorrow but will conclude the 2022 Rookie Faceoff on Monday at 3 p.m. against the San Jose Sharks. The live stream of the game will be available on LAKings.com.