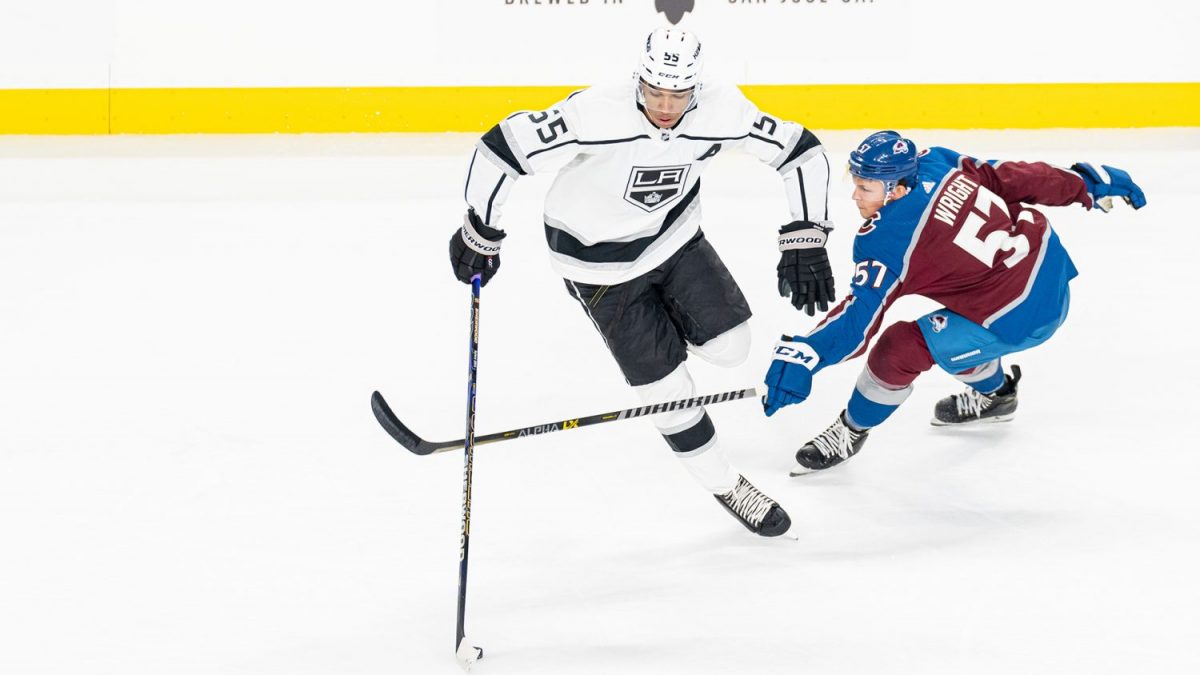 The LA Kings opened the 2022 Rookie Faceoff with a narrow 3-2 loss to the Colorado Avalanche Friday in San Jose.

The Kings created a few good chances in the opening minutes and cashed in around the midway point of the period. Francesco Pinelli crashed the net and buried a centering pass from Brandt Clarke off the rush to open the scoring.

The lead was short-lived, however, as Colorado took the lead on consecutive goals by Oskar Olausson and Sampo Ranta. Almost all of Colorado’s chances in the first period stemmed from offensive zone faceoff wins, and the Kings were outshot 9-2 in the final 8 minutes of the frame.

The Kings got back on track in the second period after taking two early penalties, resulting in two quick kills. LA capitalized on its first power play opportunity just before the halfway mark of the period. Clarke collected the puck just inside the blue line, cut toward the right circle and made a deceptive pass into the slot where Taylor Ward was waiting to slap it past Colorado goalie Justus Annunen.

Head Coach Marco Sturm, impressed by Ward’s play, elevated him to the top forward line with Quinton Byfield and Tyler Madden for the remainder of the contest.

The third period, much like the second, was riddled with penalties from both sides, but the LA penalty kill remained perfect. The Kings squandered two power play opportunities by taking penalties of their own. The Byfield-Madden-Ward line continued to create chances but was unable to find another breakthrough.

Avalanche forward Ben Meyers redirected a shot past Kings’ goalie Jacob Ingham with 3:53 remaining in the game to put Colorado ahead. The Kings created multiple good chances with the goaltender pulled, despite struggling to escape their own end for roughly half a minute, but could not find the equalizer.

Ingham was terrific throughout the game and made a plethora of important stops. He made 30 saves, impressed while the Kings were shorthanded, and was unfortunate to allow the redirected game-winner.

1. Brandt Clarke: good at hockey. The Kings’ eighth overall pick from 2021 was stellar in game one of this week’s showcase. This was the first time that most Kings fans have had the opportunity to see the young right-handed defenseman in a game situation, and he didn’t disappoint. He had the primary assist on both LA goals and was deceptive at both ends of the ice. He even made a fantastic defensive play to keep the Kings alive in the final minute of the third period. Colorado had a chance to deliver the finishing blow with Ingham out of the net for the extra attacker, but Clarke seamlessly pickpocketed the Avalanche player and made it look all too easy. He was one of the best players on the ice today, no question.

2. Sometimes it’s not always the draft picks that show off. Ward was very impressive in the offensive zone today for the Kings. He created chances, made creative passes, and scored on the power play. Ward joined the Kings organization last season after concluding his college season at the University of Nebraska-Omaha, where he led the Mavericks in scoring. He joined the Ontario Reign and recorded 10 points in 16 regular season AHL contests. Sturm said he noticed Ward’s effort early on and thought he deserved a chance to play with Byfield and Madden to finish out the game. Defenseman Marc Lajoie, an invitee from the Tri-City Americans of the Western Hockey League, also had a solid outing. The 6-foot-5 inch Alberta native set career-highs in goals, assists and points this past season in juniors, and contributed at both ends of the ice today. He was paired with 2020 second-rounder Helge Grans and seemed very calm and collected. There were a few instances where it looked like he got beat, but he used his long reach to break up plays and recover nicely.

3. Quinton Byfield has the potential to absolutely dominate the weekend showcase. Byfield scored in the 2021 Rookie Faceoff opener against Colorado last year but was kept off the scoresheet today. Don’t let that fool you. He was the best forward on the ice today, period. He came into camp in great shape after adding more weight and muscle mass over the summer. Today, he commanded play every time he stepped on the ice. He constantly drove to the net, was strong on the forecheck, and really impressed in the latter half of the game. It was a solid showing from the former second overall pick, despite not scoring.

Brandt Clarke
On being participating in the 2022 Rookie Faceoff after missing last year
It’s really nice. We have such a supportive staff in this organization and it’s been lots of fun. They’ve been so welcoming and all the guys are great. We have such a talented prospect pool here, so it’s been lots of fun. I would’ve liked to get that win today, but it was a good learning experience and we’ll try to bounce back tomorrow.

On his comfortability in the game
I wanted to make a statement right off the bat. Our team wanted to have a hot start too, so I made sure I was ready to go. I felt pretty good. They’re on you fast. There’s a lot of top players out there, but I felt pretty calm back there and I just played my game.

On assisting both Kings goals
I felt calm with the puck on my stick and I saw openings and wanted to take them. There were guys driving to the net and guys waiting for the puck in the slot, and I want to feed them right where they want it. That’s something I pride myself on, making good crisp passes. I contributed on two goals and it was beneficial for the team, but I really wish we could’ve gotten the win.

On how the coaching staff approached crucial moments in an exhibition game
They have a lot of faith in us. They know that we’re a creative and cohesive group and that we’re going to make something happen. We’re going to find the open guys. They told us where to line up on the draw to get the puck back on a dump-in, but after that, they said ‘we have faith in you guys. We’re going to pull the goalie and we know you are going to get some scoring chances, so just have at it.’ We were pretty close at times but unfortunately it didn’t go in.

Francesco Pinelli
On scoring the opening goal
It felt really good to get that first one under my belt. I had a great pass from Brandt Clarke, so credit to him as well. I thought we had a really good start to the game but it didn’t turn out how we wanted in the end.

On this year’s Rookie Faceoff opening game vs last year’s
I think the first camp is more about understanding and feeling it out. With this camp, I kind of expected what it was going to be like, so I kept up with the pace and now I’m feeling good about playing with these guys. It’s really fun to play with guys from all around the world that got drafted into this organization. We have a great coaching staff as well, so its really cool to put all of that together and play with these guys.

The Kings are back in action tomorrow at 2 p.m. against the rookies from the Vegas Golden Knights. You can watch the live stream of the game on LAKings.com.