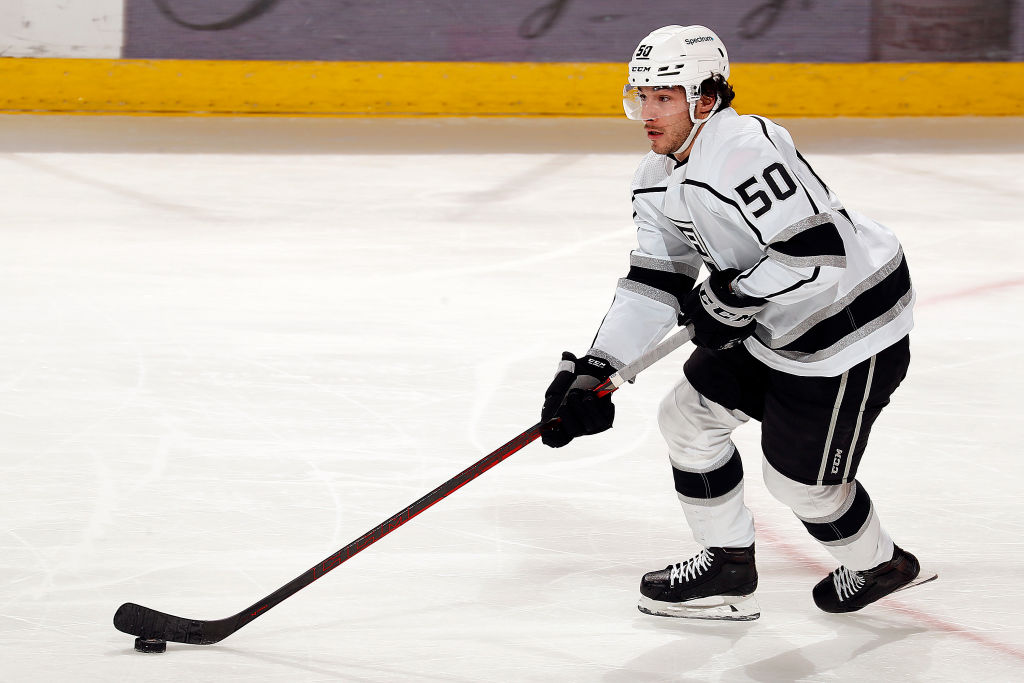 Kicking off your Thursday with the final piece of the contract puzzle!

The LA Kings have signed defenseman Sean Durzi to a two-year contract extension, carrying an AAV of $1,700,000. Durzi was the team’s final restricted free agent entering training camp, meaning that all who were under team control are now under contracts with the Kings. Now, the fun begins in working a group of more than 23 NHL-caliber players down to the league’s roster limit by October 11.

Durzi was one of the team’s better success stories coming out of the prospect pool last season, as he went from off the public radar to an essential member of a team that qualified for the playoffs. After he made his debut in November, Durzi did not miss a game the rest of the way home, including playoffs. At times, as others were out of the lineup with an injury, Durzi found himself as the team’s time-on-ice leader, playing key minutes against high-level opposition in what was often his first ever game against certain teams and players. Durzi is now re-signed at a very manageable cap hit for each of the next two seasons.

Looking at rookie defensemen around the NHL last season, Durzi was among the league leaders in scoring chances and high-danger chances for, meaning he helped to create those higher-quality opportunities when on the ice. Durzi’s strengths with the puck center around his vision and ability to see and make passes that others don’t. The result was an admirable 27 points (3-24-27) from 64 games in his first go-around at the NHL level, with Durzi trailing only Drew Doughty in assists amongst Kings defensemen. Durzi’s possession metrics saw him over 50 percent in CF%, SCF% and HDCF%, all while playing with an inconsistent partner and in various roles. While the metrics show that Durzi had some defensive deficiencies at times, with a goals for / against count that was not favorable, situation and luck dictated some of that disparity. Durzi’s offensive gifts are unique, and the hope is that he will continue to round out the rest of his game to put him in a position where his positives continue to outweigh the weaker areas in his game.

When it all shakes out, the Kings should have just over a million dollars in remaining cap space, following the official re-signings of Durzi and defenseman Mikey Anderson, who inked a one-year extension last weekend. The exact amount of space remaining will be determined by several different training camp battles, ones that will determine the makeup of the roster on opening night versus Vegas. The differences will be negligible when it comes to the cap hits of the players fighting for those spots, but the moral of the story is that not only did the Kings have more than enough space to fit Anderson and Durzi under contract, but they had enough space to fit in both players as well as to potentially call up a player down the road should an injury arise that does not necessitate long-term injured reserve and cap relief. While there was plenty of reporting to the contrary, it’s been maintained here on LAKI that the Kings were in a fine position to retain both players before camp and that’s exactly what they’ve done here, with room to spare.

The LA Kings have signed defenseman Sean Durzi to a two-year, one-way contract extension worth an annual average value (AAV) of $1,700,000.

Durzi, 23, finished the 2021-22 season – his first in the NHL – with 27 points (3-24=27) and a team-leading 121 blocked shots in 64 appearances. His 19:36 time-on-ice average ranked fifth among all team defensemen while his 24 assists were the 10th-most by a Kings rookie defenseman in franchise history and the most since Drew Doughty (21) in 2008-09. Durzi also made his NHL Stanley Cup Playoff debut this past season, tallying three points (1-2=3) in seven appearances while his 21:30 time-on-ice paced all Kings defensemen and ranked second on the team to captain Anze Kopitar.

Durzi was acquired by the Kings in 2019 along with forward Carl Grundstrom and a 2019 first-round pick (Tobias Bjornfot) in exchange for defenseman Jake Muzzin of the Toronto Maple Leafs. The Mississauga, Ontario native was originally picked by the Leafs in the second round (52nd overall) of the 2018 NHL Draft.