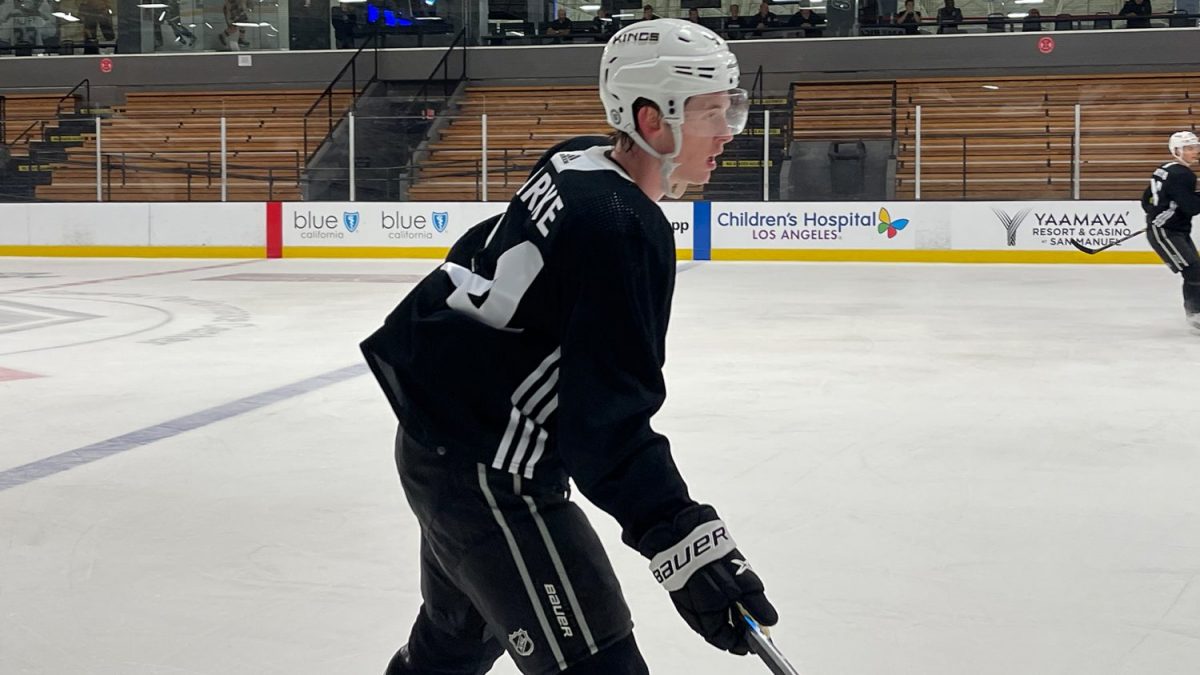 Following a one hour and thirty-minute practice led by the new head coach of the AHL’s Ontario Reign, Marco Sturm, defenseman Brandt Clarke and the Kings 2022 Rookie Faceoff roster filed into the locker room and faced the media just hours before their flight up to San Jose.

Clarke, along with Quinton Byfield and Jordan Spence, headline the Kings roster heading north this week to face-off against some of the division’s top prospect counterparts. Drafted eighth overall in 2021 NHL Draft, Clarke spent last season captaining the Barrie Colts of the OHL and averaged more than a point-per-game. Following an outstanding regular season campaign, Clarke was unable to compete in the postseason due to a lower-body injury that he sustained two games prior to the playoffs.

As Zach Dooley touched on during the Kings 2022 Development Camp coverage, Clarke felt he was able to make strides towards proving he was a more sound and trustworthy defenseman in the defensive zone.

“I think when I was when I was drafted, a lot of people were talking about my offensive capabilities and I’m not saying I let those slip – I still think I’m still getting better in that situation – but my coaches in Barrie really honed in on my defensive play, they wanted me to play against the top guys across the league,” Clarke explained. “That’s [also] what the people in LA were saying to me, they wanted to see of how I handle myself in those kinds of situations, against top guys across the OHL and I really hung in, I think I excelled.”

Healthy and at 100%, Clarke eyes this coming weekend in San Jose as a golden opportunity to showcase the improvements that he’s felt he’s made over the past year.

“I’m going to do the best I can,” Clarke said. “I hope to showcase myself. I want to show some two-way dominance, show my reliability in the defensive zone and make plays in the offensive zone. I’m really looking forward to seeing what the team and I are capable of in San Jose.”

Clarke also enters the Rookie Faceoff with a new sense of confidence within the organization. He’s in the midst of the longest stint he’s had around the Kings players and personnel, which has allowed himself to grow on and off the ice.

“I’ve been in LA for almost three weeks now, so I’ve gotten much more comfortable with organization, the systems and a lot of the players here. I’ve gotten to know them and they’ve gotten to get to know me. I definitely have a better idea on the situation here.”

Having been around his future teammates over the past few weeks, Clarke has built a bond with his teammates and fellow Kings prospects.

“It’s going to be really fun playing along these guys in this locker room,” Clarke said. “There are so many talented and great guys in this prospect pool. We’re going to do everything we can to show out for this organization.”

However this weekend’s Rookie Faceoff shakes out for Clarke and the Kings, the Ottawa native hopes that this is just the beginning of him putting a Kings jersey this season. With so much yet to be determined when it comes to the Kings defensive lineup, Clarke wants to have his name in the mix for an NHL roster spot come October 11th, when the Kings open the 2022-23 regular season by hosting the Vegas Golden Knights. This weekend provides the first of a few more key opportunities to push for an NHL roster spot. To follow, Clarke and members of the Kings will report to training camp later this month. After that, the Kings will play seven preseason games and decisions will be made.

“I want to be in the NHL this season and be on the Kings roster on opening night alongside all of the great Kings players we have. That’s my goal and my dream. It’s not going to be handed to me. I have to show everyone I’m ready for the NHL on and off of the ice. It’s going to be hard, but it’s going to be fun. If I can earn an opportunity, I’m going to try to run with it. I’m focused on one thing at a time and that begins with this weekend, but I’m really looking forward to what the next month or so holds.”

Clarke and the Kings prospects take on the Colorado Avalanche’s equivalent at 2:00 p.m. on Friday at TechCU Arena in San Jose. They’ll then line up against the Golden Knights’ rookies on Saturday at 2 p.m. and on Monday against the host Sharks at 3 p.m. For more information on the 2022 Rookie Faceoff hosted by the San Jose Sharks, click here.