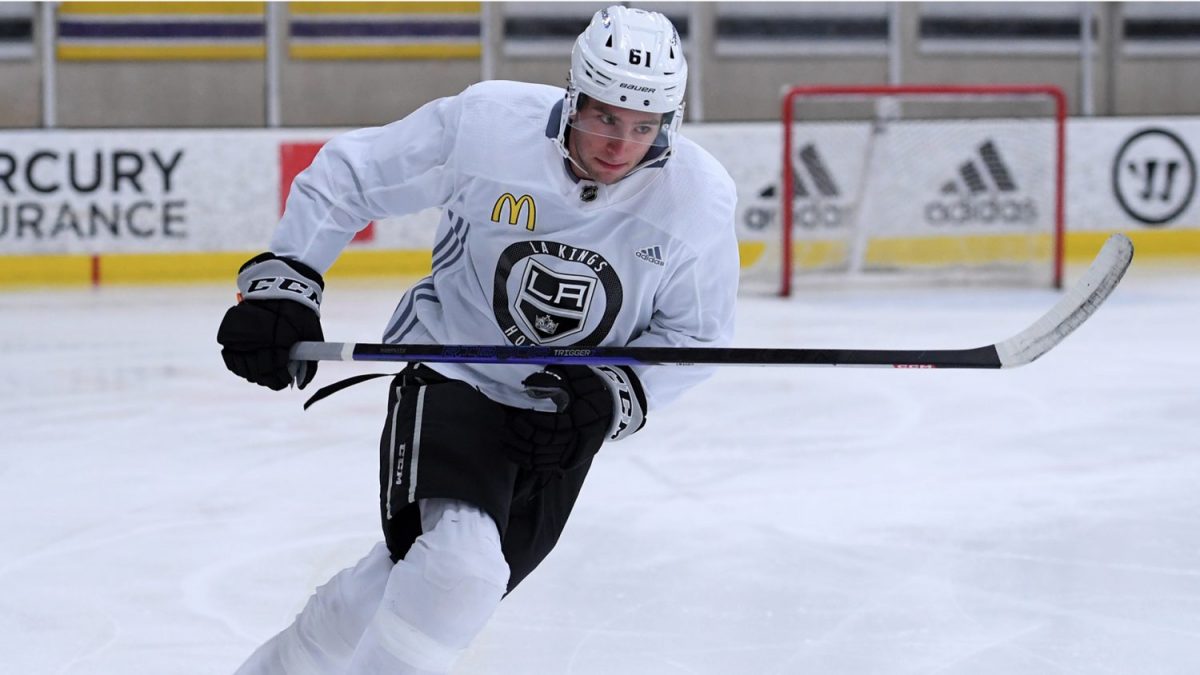 After seven names were called by the Kings on Day 2 of the 2022 NHL draft, the newest Kings draft class is now three weeks old and one development camp in. Following the conclusion of development camp last month, the Kings Director of Amateur Scouting, Mark Yannetti, spoke about the newest additions to the Kings prospect pool, in depthly, giving some insight into why the Kings picked the players that they did.

Yannetti opened up and identified reasons for drafting the players they did and what he and the scouting staff saw as the player’s strengths, weaknesses as well as a potential road ahead towards their path to the NHL.

In order of their draft selection, we begin with Jack Hughes –

Jack Hughes (C)
Round 2, Pick 51 – Northeastern University (NCAA)
“Hughes’ hockey IQ is like he is watching the game from above……[he] has a much wider view of the game. He knows where the holes are and where the seams are. You can call that instinct of going to the right places or passing the puck to the right place, or even timing. Hughes has a very good form of hockey IQ.”

The Kings’ first selection of the 2022 NHL Draft came with the 51st overall selection in the second round and yes, it sounded very familiar to hockey fans across the world. With the pick, the Kings selected Jack Hughes, the son of Montreal Canadians General Manager Kent Hughes. Hughes supplies an elite level of hockey IQ, complimented with an above-average ability to distribute the puck. Still looked at as someone who can add a lot to the offensive side of his game, Hughes’ hockey IQ was looked at as one of the best among all eligible prospects.

Kenny Connors (C)
Round 4, Pick 103 – UMASS Amherst (NCAA)
“[Conners] played heavy this past year and his compete level really showed through. Most young players don’t do well defensively in leagues like the USHL. Connors showed a pretty good defensive game. That said, you need to do more than just that to get drafted, there needed to be more offensive production and that’s why we didn’t take him the last year. Our scouts went into this year with [Connors] as a guy to watch because we liked some of the things about him……we felt that a lot of the offensive improvement was made from specific skillsets and learning the game.”

After being passed over in the 2021 NHL Draft, Connors returned as a 19-year-old draft-eligible prospect. Having had their eyes on Connors for multiple seasons, what the Kings scouting department felt that kept him undrafted a year ago had been resolved. At 6-1, 195 LBS, Connors showed a stronger game this past season, both offensively and defensively, impressing Kings scouts enough to be taken in the fourth round.

Angus Booth (LHD)
Round 4, Pick 116 – Shawinigan Cataractes (QMJHL)
Yannetti compared Booth in some ways to Mikey Anderson – “Mikey has an inner burn and a drive. [Booth] has it as well. Mikey has it in spade, Booth still needs to develop it more… There are some similarities. Mikey [at that age] defended a shade better, but Booth is a much better skater.”

Booth entered the draft coming off of a breakout 2021-22 season. The 18-year-old, two-way defenseman played a key role on both ends of the ice, helping the Shawinigan Cataractes to a QMJHL championship and a Memorial Cup appearance. Many of the scouts around the NHL, including Yannetti, addressed the challenge of evaluating Booth’s season due to level of outstanding talent that the defenseman was surrounded by on the Cataractes. All of that addressed, Booth currently provides value on both ends of the ice. Moving forward, a focal point will be if Booth can continue to develop as an impact player at the QMJHL level over the next two seasons.

Otto Salin (RHD)
Round 5, Pick 148 – HIFK (Liiga)
“Salin’s skating was the first thing that stood out. His skating is excellent. His skating allows him to get into situations and get out of them [both good and bad]. He has the ability to skate the puck up the ice and push the pace; that’s a great thing. That’s an ingredient you can’t add later down the line and you can always pull a guy back. The fact that [Salin] can skate himself in and out of trouble at this stage of his career is a good thing… and he has the ability to play more of controlled game.”

The Kings added another promising prospect at the right-handed defenseman position when they drafted Salin in the fifth round. It’s well documented that the offensive side is there, but questions come up when scouts across the league talk about the Finn’s defensive play. Salin has shown he has a great hockey IQ with the puck and in offensive situations.

Jared Wright (RW)
Round 6, Pick 169 – Colgate University (NCAA)
“What [Wright] started to do more and more as the season went on was using his skating. Wright was always a good skater and showed chance of the power in his base but didn’t always use his skating effectively. From the midpoint of the last season, Wright started to use his skating effectively. Very rarely was there a game where he didn’t get behind the defenders, and he did it in multiple ways.”

“The thing we like the best [about Wright] is the power element of his skating, those were the ones that really got [the scouting staff] going. He’s not a one-trick pony. He’s a big kid and I’m crossing my fingers, because if the skating is a natural part of his game going forward, he’s going to outperform his draft position.”

Despite being described as a longer-term project, Wright impressed both of the Kings American Scouts Tony Gasparini and Ted Belisle last season. At 6-2 and 172 LBS, the Minnesota-native’s play only got better as the 2021-22 season progressed. The forward showed the ability to use his strength efficiently, helping him capitalize offensively. But consistency will be key for Wright moving forward. The multi-skilled offensive threat has many tools, it’s now about sharpening those tools and adding to the repertoire.

Jack Sparkes (RHD)
“The two main reasons we drafted sparks were one, he’s 6-8 and he can already skate. Most of the time you draft a 6-4 or 6-8 defenseman in the later rounds you hear the pundits say ‘project’ and ‘raw’ because they usually can’t skate. We don’t have to deal with that, Sparkes can skate. In terms of his foundation of work with Sparkes, we don’t have to do anything. At that spot (sixth round, 180th overall), to get size and skating, I’ll take that. He seemed like the right pick for that spot given his attributes.”

“Having five years of potential development certainly impacted our decision to take Sparkes.”
Round 6, Pick 180 – St. Michael’s Buzzers (OJHL) MSU Commit
Drafting a 6-8-, 227 LBS, is never going to go unnoticed. For Yannetti and the Kings, Sparkes isn’t expected to be in a Reign or Kings uniform any time soon, but that’s how they want it. Sparkes, who is committed to Michigan State will likely use up most if not all of his eligibility in college. As Yannetti explains, that’s a good thing because he needs time and it will maximize his ceiling and potential.

Kaleb Lawrence (C/RW)
Round 7, Pick 215 – Owen Sound Attack
“We identified Lawrence a few years back and noted to keep an eye on his skating. And then he didn’t play for two years. But, he went the Columbus Blue Jackets development camp two years ago, got hurt. This year he was going to go to the Calgary Flames development camp. [Lawrence] is a guy who has clearly impressed multiple people along the way. In terms of upside, if he hits, he’s a huge hit. If he hits, he will check a lot of different boxes [for what we want…] this was a unique opportunity to take a chance on a kid who has shown a lot of good things in very little opportunity.”

Due to the COVID-19 lockdown in Canada, there was no 2020-21 OHL season. Fast forward to the following year, ready to play, Lawrence sustained an injury and was limited to just two games into the 2021-22 season. Because of that, Lawrence, the 6-7, 229 LBS left-handed forward has only played real two games in the last two years. Yes, two……but Yannetti sees Lawrence as a guy with potential. With a hopeful clean bill of health, Lawrence is set to begin next season with the Owen Sound Attack.

Three members of the 2022 draft class – Hughes, Connors, and Salin – participated in summer selection camps with their respective nations. More on those showcases HERE. Next steps will see players like Hughes and Connors return to their collegiate teams, while players like Booth could join the group for main camp, before returning to the QMJHL.