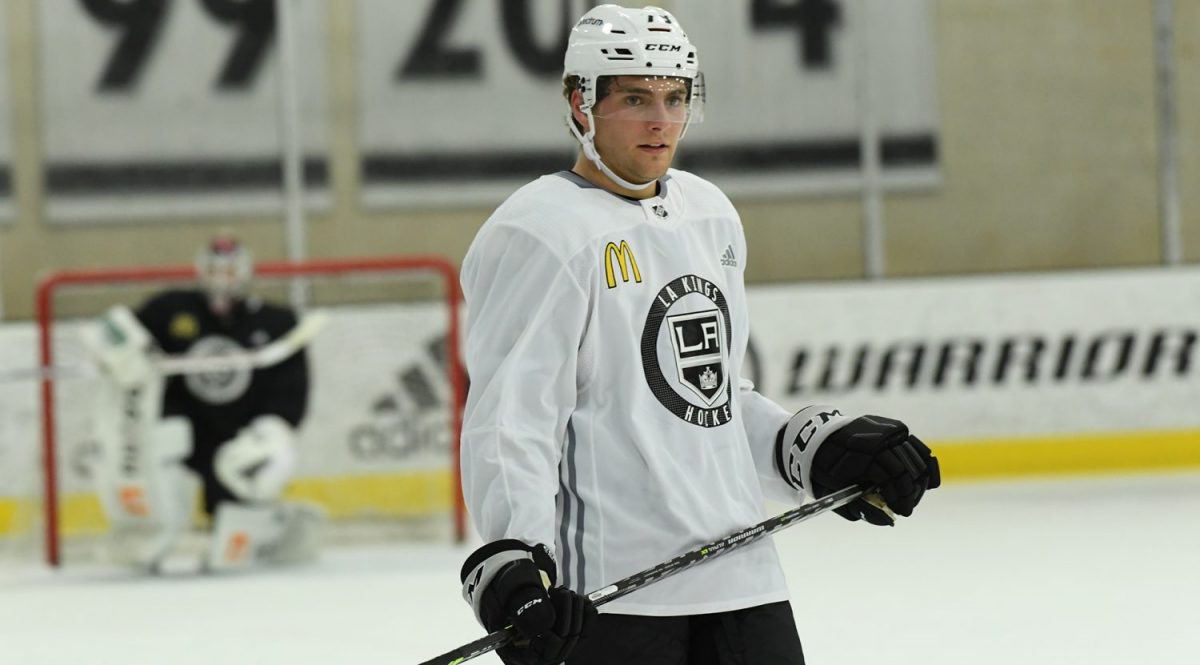 The group held a formal scrimmage today, complete with a time clock, score being officially kept and on-ice officials. With the larger group broken into two, the Kings scrimmaged for over an hour, with Team Black skating to a 6-4 victory over Team White.

The scrimmage as a whole was broken into four quarters, with two quarters played at 5-on-5 and two played at 4-on-4. Forward Samuel Fagemo had a hat trick for Team Black, while forward Alex Laferriere scored twice for Team White.

In the opening session, Fagemo scored the only goal, a rebound off of a Quinton Byfield shot. Team Black surged out to a 3-1 lead after the first 4-on-4 session, with Laferriere getting his team on the board first, followed by goals from Fagemo and forward Quinn Emerson, with the former burying a nice, cross-ice feed from Taylor Ward.

After an ice cut, the teams traded goals early during the second 4-on-4 session, with Fagemo skating onto a long pass and deking to the backhand for a breakaway goal, before Laferriere walked in from the left-hand circle and went bardown with a shot to make it 4-2. Forward Andre Lee answered with a snipe of his own, pushing the score to 5-2.

Team White scored two late goals, with the goaltender pulled, to make it a one-goal game. Forward Arthur Kaliyev scored on a deflected shot, as he walked in down the right wing and had his wrister partiailly blocked, but into the net. Forward Lukas Sillinger then buried a rebound in front to make it 5-4, before Byfield put home an empty netter to seal the deal.

The best two plays from the day didn’t wind up in the net, but are worth acknowledging. An excellent, spinning passing play from Fagemo and Taylor Ward hit a crashing Braden Doyle at the back post, who hit the post with his shot. There was also a nice connection between Jack Hughes and Laferriere. The former flipped the puck sky high to the latter, who took it out of the air in stride, though his breakaway move was stopped.

Today’s Impressions
– Laferriere and Jack Hughes played together a bit – Laferriere is shifty, while Hughes is silky. The former was able to work his way in and out of defenders well, and scored a really nice goal during 4-on-4 play. Hughes receives and distributes pucks well and looks good doing it. Hockey IQ is his number one asset and you could see that on the ice.
– Brandt Clarke is a player who stands out during the scrimmage portions, working his feet well and showing effective distribution up ice, almost effortlessly. He’s not the fastest straight-line skater and he still has things to work on, but it’s clear there is high-level ability in many areas.
– Mark Yannetti talked about Jared Wright’s ability to use his speed to drive the net. One of the best skaters on the ice and we saw that several times this week, and again today, with how he got to the crease with wide speed.
– Samuel Helenius had a huge frame and we saw instances where he used it effectively along the boards and his reach in the neutral zone. Also saw times where he didn’t. Work in progress, but a lot of love for the player internally.
– Andre Lee is a big man and had a few nice plays. His goal was a beauty of a shot and he had a shot block with the goaltender pulled that drew a big round of stick taps from his bench. Nice showing as he approaches his first year of pro hockey. 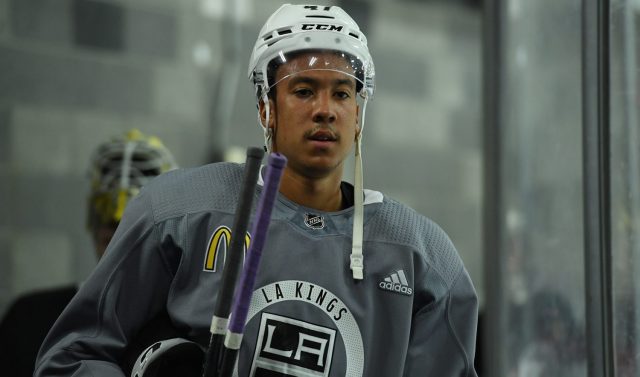 Andre Lee
On the structure of the week as a whole
It’s actually a good system. On [each day], we work on puck protection, wall play, shooting, they have it lined up. You come here, you work on it and you get better, you work on the things you feel you need to improve on. They have it well lined up for us.

On implementing things from the practice sessions into the scrimmages
You practice in the morning, we worked on stuff and then we brought it to the game. That’s what we’re training for, to be good in games, so we work on things in the morning and then bring it to the games. This last day, you just play and do the things that you worked on during the week.

On an area of his game he wants to work on heading into his first pro season
Being a little bit stronger on the puck and taking it to the net. Being stronger with my legs.

Alex Laferriere
On testing himself against guys from so many different leagues this week
Definitely. When you train with your college team, everybody played USHL, prep school, something like that, but coming here, guys played in the OHL, the [QMJHL or WHL], even Europe, so you get guys from all over. You get to compare yourself to those guys and obviously a lot of guys in this room have pro experience. Getting to watch them, see where you need to get yourself in order to play here, has been good.

On the importance of this week for college players, who aren’t able to attend rookie camp or training camp
Everyone else gets to come back for rookie camp, and some guys for main camp, but the college guys just get to come here, meet everybody, work with the facilities and stuff like that. We have less time to stand out, which gives us an extra edge, so it’s been good.

On his biggest strides at Harvard, and where he’s looking to improve
Our team was very offensive, so just getting points was good. Going into next year, trying to round out my defensive game, wall play, will be good. That’s something I’ve been working with guys here on, and guys at school on, so I think that will help a lot.

Juho Markkanen
On the week as a whole, now that he’s gone through it
It was good. I hadn’t been on the ice much this summer, I didn’t really have the chance, so it was nice to get back on the ice and back [to Los Angeles]. A lot of great guys here, good coaches and a good time on the ice.

On not having a ton of “goalie specific” drills, and how that worked for him
Yeah, we didn’t have that much just for goalies. Especially on the forward ices, lots of shots, lots of good scoring situations, we didn’t really do much with the defensemen. Lots of ice and we had those scrimmages in the afternoon, definitely enough ice time for us.

On facing Arthur Kaliyev’s shot this week
Yeah, that was definitely a hard shot, very accurate and very tough to save, especially his, but there are many good shooters here.

Tried to focus this week on getting a few quotes from as many Kings drafted players as possible, and I believe that we got nearly all of them. Hopefully anyone else that was missed, we can snag during rookie camp come September!

With that, the week comes to a close. Most of those participating will be on flights out today, with some headed to summer selection camps for their respective Under-20 clubs and others returning to their previously scheduled summer training. For Helge Grans, he’ll be with Team Sweden at the World Juniors, while Samuel Helenius will be with Team Finland. Brandt Clarke and Jack Hughes will head to Team Canada and Team USA respectively for the summer showcase, which has players in contention for both the 2022 and 2023 tournaments. More hockey for those players to come, with the hopes of more content over the next few weeks.

We’ll recap the week with Mike Donnelly, a veteran of the Kings player development department, tomorrow. A good interview with him that I’ll post here in full for those interested in listening, with a few select quotes pulled as well for those who aren’t. 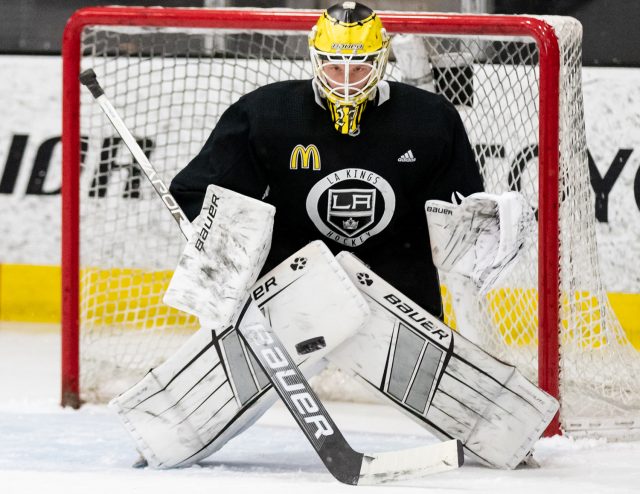