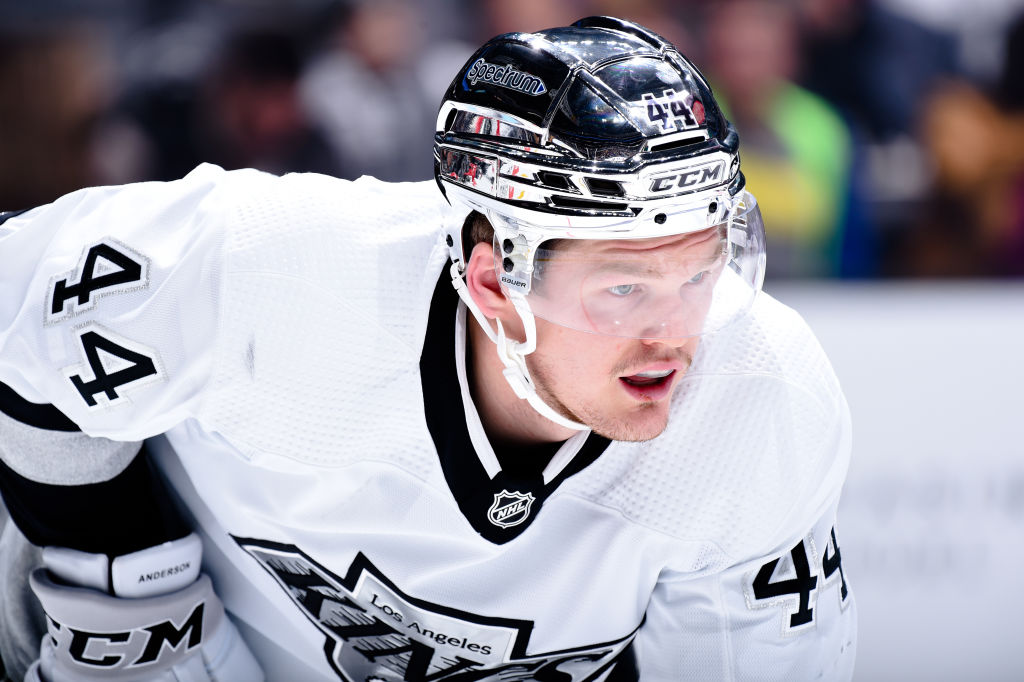 Is there a better LA King to review on the Fourth of July than Mikey Anderson? Former captain of Team USA at the World Juniors Mikey Anderson, that is. When Anderson was in action, he was exactly what we’ve come to expect from him in terms of defensive prowess and reliability on the backend. He took steps forward this season in what was his first go at a full, 82-game schedule in the NHL and continued to develop as a reliable option alongside Drew Doughty on the team’s top defensive pairing.

While Matt Roy beat him to the punch on the Steady Eddie nickname, Anderson brings consistency and stability to the Kings on the backend, despite a slightly different skillset than Roy. What they share, however, is defensive acumen. Anderson has proven to be a standout defensive defenseman, someone who excels without the puck and excels at his own end of the rink. He’s complemented Drew Doughty exceptionally well on a pairing, not only holding his own with first-line minutes, but also enabling Doughty to play his own game effectively. Anderson also possesses strong leadership traits and a bounceback mindset to move past mistakes or poor games quickly.

“His impact on the game is more about (playing) without the puck,” Kings Assistant Coach Trent Yawney told Lisa Dillman. “His positioning. His play around our net. His penalty killing and ability to play against top forwards. You combine that with his leadership, which he is getting more comfortable with, and you can see why he’s worn letters with other teams that he has been on.”

Trending Up – There are two sides to Mikey Anderson’s game this season, both of which are good and both of which are important. There’s Anderson, Drew Doughty’s partner and one half of the team’s top defensive pairing when everyone was healthy. There’s also Anderson, the defenseman on his own, and someone who stepped up when called upon without Doughty, proving he could hold his own without his normal partner. Also important.

On a personal level, Anderson saw immense improvement from a possession metrics standpoint, as the team around him improved. From last season to this season, Anderson saw his on-ice chances for increase in shot attempts, scoring chances and high-danger chances, while his percentages all improved by nine percent or more. The result was an on-ice total of 12 more goals for at 5-on-5 this season, despite nearly identical time-on-ice numbers from the 2020-21 campaign. His main partner both seasons was Doughty, meaning that individually, Anderson took strides forward in several areas, regardless of who he played with.

Trending Down – If there’s a knock on Anderson, it’s likely unchanged from what it was after last season. The Minnesota native totaled just eight points this season from 57 games played, while averaging nearly 18 minutes per game at 5-on-5 with high-level players around him. He did expand his individual shot creation metrics, but it did not translate into more offense for him personally. All that was written above, in terms of Anderson’s defensive game, outweighs his lack of raw, offensive production, but moving forward, it’s the area that you’d like to see some growth in. If Anderson could elevate that area of his game, even just a bit, it would add another element to the Kings game from the backend and when paired with his high-level defensive game, it would make for one heck of a defenseman.

Though he held his own playing with other partners, Anderson also certainly had better numbers playing with Doughty this season than without. When Doughty was injured, players like Anderson were forced into different roles and without several veterans in certain games, results were tough at times. His possession metrics fell across the board without Doughty, but the goals for / allowed remained just about the same, meaning that even though Anderson’s all-around game suffered, it didn’t cost the team.

2022-23 Status – Anderson is a restricted free agent this summer, coming off of his three-year, entry-level contract. During exit interviews, General Manager Rob Blake called re-signing Anderson a priority this offseason, with the player valued highly internally as a homegrown talent.

While he has not posted gaudy offensive numbers, Anderson has formed a very solid relationship on the ice with Doughty, proving to be an effective foil on the top defensive pairing. Anderson’s steady and reliable game has meshed well with Doughty, who also takes great pride in his defense. It’s also allowed Doughty to take more risks offensively, which resulted in a strong offensive season for number 8. It remains to be seen how the Kings will adjust their blueline on the left side this offseason, but assuming he comes to terms on a new contract, Anderson has a place in the top four moving forward.