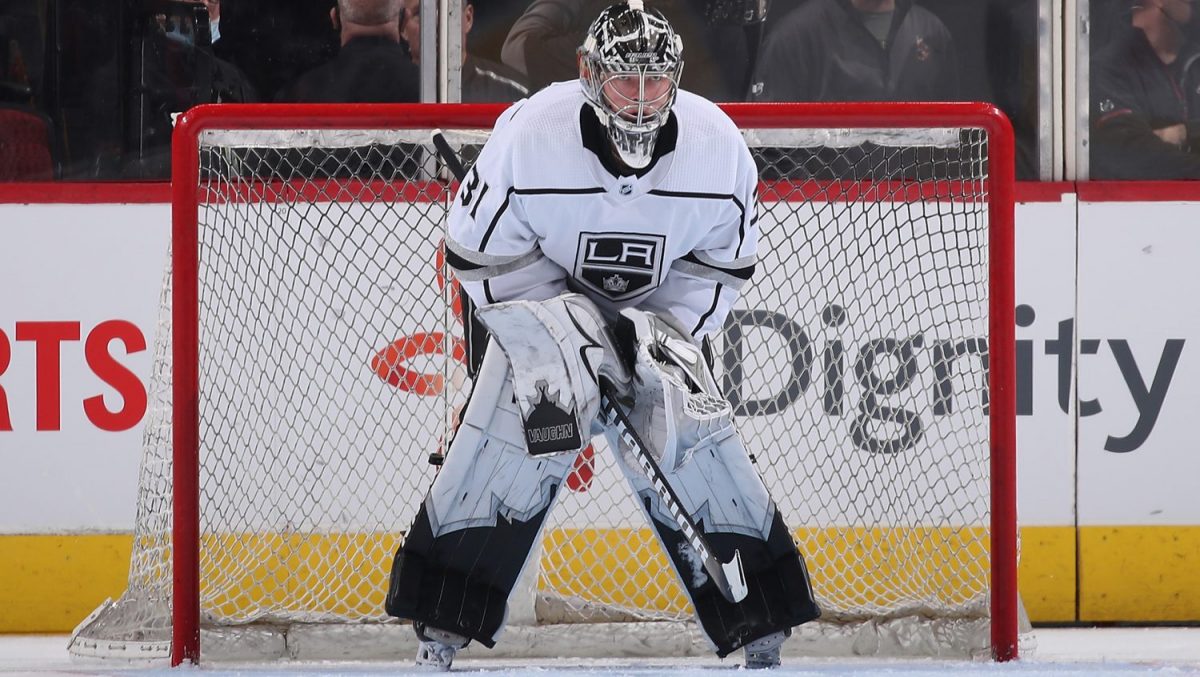 Villalta assumed the starting net for the AHL’s Ontario Reign during the 2021-22 season, as he ranked third in the American Hockey League with 28 victories this season. Villalta’s .903 save percentage was a career-best at the AHL level, while his 2.98 goals-against average was a career-low in the right way.

Villalta’s progression has been solid throughout the course of his contract. He began as a rookie and shuffled between backing up Cal Petersen in the AHL and starting regularly in the ECHL. After the Kings traded Jack Campbell to Toronto, with Petersen recalled as a result, Villalta was solid down the stretch for Ontario, keeping the team in the playoff mix until the season was eventually cancelled due to COVID. The Godfrey, ONT native certainly had an up and down COVID-shortened 2020-21 season, but was a driving force in net behind the high-flying Ontario Reign that finished second in the Pacific Division this past season. His growth and evolution as a third-year pro earned him this contract extension, as the likely starter for the Reign behind the NHL tandem of Petersen and Jonathan Quick.

LA Kings Goaltending Development Coach Matt Millar on Villalta
Matt has rounded out not only how he wants to play on the ice but how he wants to develop a routine off ice and I think he’s starting to see how those two things work together and come to the rink ready to work every day on that routine. I think he has a couple little things he wants to check the box on in practice and little things he really believes in and trusts in his game and as far as our work together. It’s just making sure that we do that on practice days and on days that we have goalie sessions, maybe add a little more to it and tackle a situation he’s seen in a game or something that he’s seen in practice that he wants to touch up on and then it’s just him going out and playing. I think the great thing for Matt is he’s performed this way in practice regularly and I think he’s just now rolling that out into games. Usually Monday thru Thursday we’re working on his details and his habits and what you see Friday, Saturday or Sunday is just an extension of the work he’s put in during the week.

Back in March, Allard was acquired in a smaller deadline deal, from the Nashville Predators, with forward Brayden Burke going the other way. At the time of the trade, the Kings had several regulars on the backend out injured, which impacted the team at both the NHL and AHL levels. As regularswere recalled, the blueline became thin with AHL-Ontario. Insert Allard, who proved to be a nice fit in limited time. The Quebec native posted 10 points (3-7-10) from 15 games with the Reign, in addition to three points (1-2-3) from five postseason contests. Allard showcased strong offensive abilities in his short stint with Ontario, stepping into several different situations in a productive way when needed by the team.

Ontario Reign Assistant Coach Chris Hajt on Allard
[I’ve been] really impressed for sure, with how he’s worked that offensive blueline, he has a calmness about him and he can obviously shoot the puck. He’s a tremendous person, we’ve been lucky to have him come into our team [at the trade deadline] and he’s fit right in. He definitely has ability with the puck, he has the ability to play in all sorts of situations, things that we’ve been counting on from him, so good on him to accomplish that.

About Allard
The Kings acquired Allard, 24, on March 21, 2022, from the Nashville Predators in exchange for forward Brayden Burke. Upon joining the Ontario Reign of the American Hockey League, the 6-1, 180-pound defenseman registered 10 points (3-7=10) in 15 games. He went on to add three points (1-2=3) in five playoff games to help the Reign sweep the Pacific Division first round and advance to the second round.

Originally drafted by the Predators in the third round (78th overall) of the 2016 NHL Draft, Allard has played one NHL game and appeared in 257 regular-season AHL games with the Milwaukee Admirals, Reign, and Wolves, totaling 107 points (21-86=107). He has also skated in 10 AHL Calder Cup playoff games, registering five points (2-3=5) in those appearances. Before joining the professional ranks, the Saint-Sauveur, Quebec native skated four seasons with Chicoutimi Sauguenéens of the Quebec Major Junior Hockey League, posting 177 points (34-143=177) in 250 appearances and went on to add 19 points (5-14=19) in 31 playoff games.

About Villalta
This past season, Villalta registered career-highs with the Reign by posting a 28-10-7 record, 2.98 goals-against-average, and .903 save percentage in 46 appearances. Among all AHL goaltenders, the 23-year-old ranked third in wins (28) and fourth in minutes played (2660:32) as he helped the Reign return to the AHL Calder Cup Playoffs. In the playoffs, Villalta registered back-to-back wins in the Pacific Division First Round to help the Reign advance to the second round before he was recalled by the Kings on an emergency basis.

Villalta was drafted by the Kings in the third round (72nd overall) of the 2017 NHL Draft after three seasons (2016-19) with the Soo Greyhounds of the Ontario Hockey League. The Kingston, Ontario native finished his career with a 98-20-9 record, 2.71 goals-against-average and .908 save percentage while also posting a 21-15-0 record, 3.38 goals-against-average, and .889 save percentage in 37 playoff outings. In 2017-18, he registered a league-leading 40 wins and 2.58 goals-against-average in the regular-season before posting 14 wins in 24 playoff appearances to guide the Greyhounds to the Championship Series of the OHL Playoffs.

As noted above, Villalta is the second of 13 restricted free agents to sign extensions this offseason, bringing the number of RFA’s down to 11.

On the Ontario Reign front, the team announced yesterday afternoon that it has re-signed forward Jacob Doty to a one-year AHL contract. Doty has been with the club since the 2019-20 season and is in line for his fourth campaign with Ontario.

Doty is an important piece of the Reign for a few reasons. On the ice, he delivers toughness, physicality and a willingness to stand up for his teammates when necessary. Doty is one of the AHL’s most feared enforcers and has rounded out his game over the last two seasons into an effective fourth-line player, beyond just the fighting that stood out when he first signed a PTO three years prior. Off the ice, Doty is a locker-room leader as a veteran on a young team overall. With several younger prospects, having solid veterans, led by long-time captain Brett Sutter, is an important part of developing talent at the AHL level. For all of those reasons, Doty is a good signing for Ontario.

Doty, 29, skated in 41 contests during the 2021-22 campaign for the Reign in his third season with the team, posting a goal and two assists. His 89 penalty minutes ranked second-most on the club. Doty also appeared in all five of the team’s postseason contests, adding 19 penalty minutes.

In eight professional seasons from 2014-22, the 6-foot-4, 225-pound native of Denver, Colo. has appeared in 142 AHL games with the Reign and Chicago Wolves. Doty totaled 20 points during that time on eight goals and 12 assists while recording 388 penalty minutes.