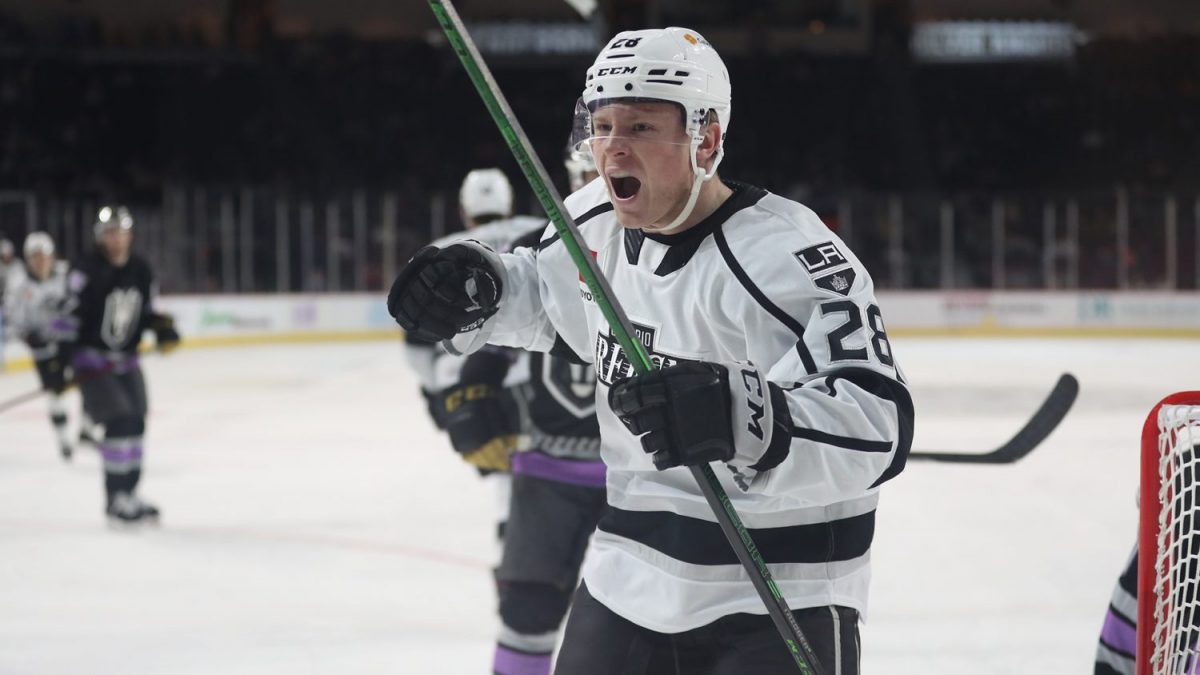 Insiders, today we take a look at forward Jaret Anderson-Dolan, who played the majority of his third professional season in the American Hockey League with the Ontario Reign in 2021-22. Anderson-Dolan was a top-6 forward for the Reign when he wasn’t jumping into a fill-in role with the LA Kings, making seven appearances in the NHL lineup. The extra ice time at the AHL level allowed him to work on his offensive game, and he became one of the team’s leading scorers, finishing with the third-most points on the club (47) while also ranking third in goal scoring (24). All of his final regular season offensive numbers were career-highs.

A breakout offensive year for Anderson-Dolan solidified him as one of the Reign’s top forwards, primarily as a middle-six center, and saw him become a key factor on the club’s record-setting power play unit. While able to play a two-way game, the Calgary, Alta. native found chemistry with wingers Vladimir Tkachev and Samuel Fagemo in November and the trio was frequently reunited by the team’s coaching staff throughout the season and even during the playoffs.

Anderson-Dolan set his sights on becoming a more consistent offensive player this season and his hard work paid off, posting about a point per game for a large part of the year. Some of his biggest contributions came on the power play, where he scored 12 goals and was a mainstay on the Reign’s top unit. In addition, he spent some time on the left wing with top scorers TJ Tynan and Martin Frk.

“JAD’s a true professional,” said Reign assistant coach Chris Hajt. “He comes to the rink every day with an idea in mind of what he wants to do and how he wants to play and get better. He’s always in the gym, he’s taking care of his body and his conditioning and he eats well and does all the little things to allow him to be consistent.”

Trending Up – In very simple terms, at the AHL level, Anderson-Dolan had more games in which he found his way onto the scoresheet than nights where he was held off it. He posted points in 34 different contests, including lengthy point streaks of six and seven games, as well as a road point streak of 13 games from Feb. 4 thru April 13 which was the second-longest in the league during 2021-22.

Anderson-Dolan also took on more of a leadership role in the locker room on a team with both young prospects learning the pro game and experienced veterans that have seen it all at the AHL level.

“When you talk to him he’s calm, but you can tell that he’s a smart guy and there’s a lot of respect for him in that room,” said Hajt. “He has that leadership ability and when he speaks, guys listen because he understands the game on both sides of the puck. That’s definitely a side of him that we feel he has. He shows it on a daily basis and other guys take notice.”

Trending Down – It was hard to find many flaws with the campaign Anderson-Dolan put together, especially during the regular season. But unfortunately, like many Reign skaters that excelled prior to the playoffs, he was unable to translate that success into the postseason. Ontario averaged five goals per game in their shortened first-round triumph over San Diego but only scored seven times in the three straight losses to Colorado before being eliminated. Anderson-Dolan managed an assist in Game 2 against the Gulls but was held off the scoresheet in each of the team’s three second-round contests. In those tight moments when offense is hard to come by, they needed a bit more from one of their top options.

The only other spot that Anderson-Dolan failed to produce in was during his limited action at the NHL level. His best opportunity came in early March when he was given a brief three-game promotion to the Kings’ top line alongside Anze Kopitar and Adrian Kempe. LA went 3-0-0 in those contests, but Anderson-Dolan was held without a point despite playing an average of 15 minutes per game with the team’s top two point producers. It was a small sample size, but the Kings are looking for more from someone in that type of role.

“Everyone’s goal is getting up to the NHL and staying up there permanently so obviously that’s mine as well and it’s a big offseason for me,” said Anderson-Dolan. “I want to be up there full-time next year. I think this year was great for my development, just playing a lot and playing different situations so thankful for that but obviously I wanted to be up with the Kings this past year as well so I’m a little bit disappointed from that and I’ll just use it as motivation for this summer and come into camp and earn a spot.”

2022-23 Status – Anderson-Dolan is a restricted free agent this offseason as his three-year entry level contract signed in September of 2017 concludes at the end of the 2021-22 season.

Once he has a new deal on the books, Anderson-Dolan should once again be in a position to compete for a spot on the NHL roster. His season of all-around success at the AHL level proved that he has what it takes to be a pro, but the next step for him is showing the Kings that he can consistently produce against the top competition in the world. In 50 career NHL games, the attacker has just 12 points (7g, 5a).

“It’ll be a big offseason for me,” Anderson-Dolan said. Usually, I just take a week or two and just shut the mind off, let the body recover from the season and reset, but get back into the training right after that and stay off the ice for a little bit longer. Once I get back, I go after it pretty hard. The offseason is the time to take steps and get ahead of other players that you’re competing against and work on your game, so I’ll try to take advantage of it as much as I can.”