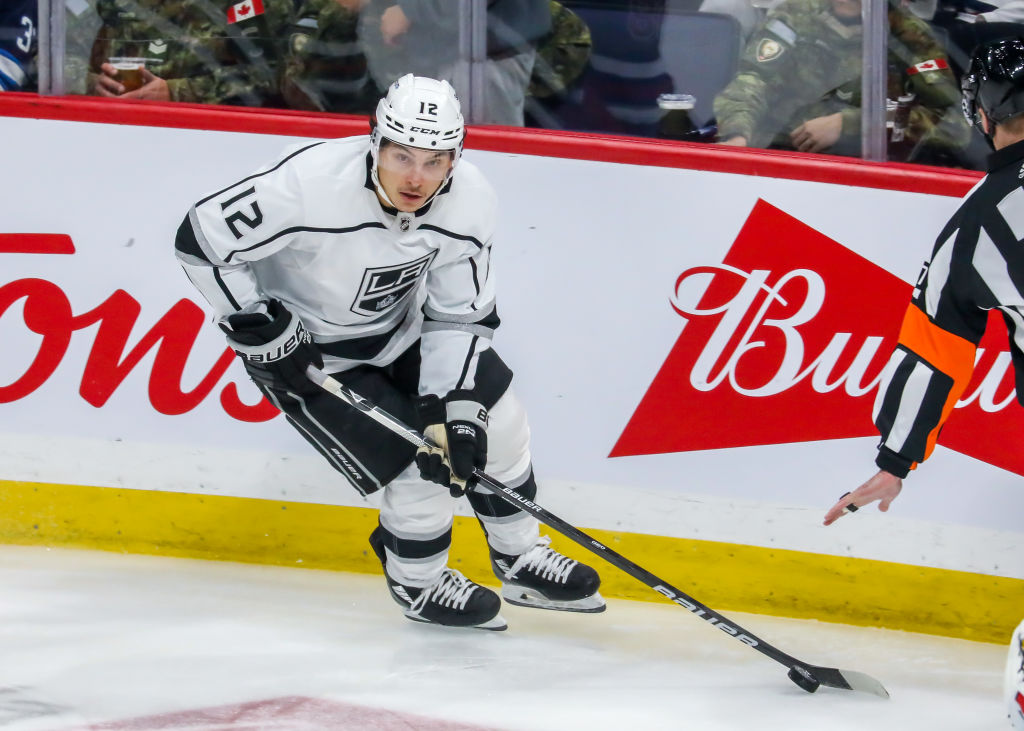 Starting off the week with one of the top stories on the LA Kings this season in forward Trevor Moore, who became one of the most reliable and important contributors on the team this season. Moore had an excellent, breakout campaign and finally found a permanent home in the LA lineup, with his tools and skillset becoming a staple in the resurgent Kings season.

Moore begins our look at the second line, one that became the most consistent unit on the team this season. Moore began the season in the bottom six, playing with his usual energy and responsibility, however he was unable to find a regular home on a line, with his versatility both positionally and by role valued by the coaching staff. In the second half, however, Moore clicked immediately with Phillip Danault and Viktor Arvidsson and never left that spot, forming one of the NHL’s best possession lines around the league.

“I’ve always said that we have to take some responsibility for his start, and when I say we, I mean the coaching staff,” Todd McLellan said of Moore’s role. “We’ve moved him around, we put him with different people, he was like our swiss-army knife and now he’s found a home. He’s been productive there, that line has an identity and they play extremely well. I never really see Mooresy tired, he’s got an engine that’s second to none. I’m really happy for him and I’m glad that our group has him.”

Trending Up – In terms of both overall scoring and possession metrics, Trevor Moore ranked amongst the highest players on the Kings.

Moore ranked second in the Kings in assists, fifth in points and tied for fifth in overall scoring, with career highs set in all three categories. Moore collected 41 of his 48 points during the second half of the season, something that aligned with his bump up into the top six. He posted 16 points from 14 games played during the month of January and led the Kings in scoring during the 2022 portion of the 2021-22 season, with a +23 rating during that stretch of the season.

The speedy winger was also a top-three forward in terms of shot attempts, scoring chances and high-danger chances for on a per/60 basis, ranking amongst his linemates in those categories. On an individual basis, Moore had more high-danger chances on a per/60 basis than any player on the Kings, with his 5.01 mark ranking 14th in the NHL. Moore was also a top 10 player around the league in rush attempts and rebounds created, all metrics that made him one of the league’s best players in expected goals while on the ice.

Furthermore, Moore one of the most dynamic shorthanded players in the NHL, as he led the league with five shorthanded goals and six shorthanded points this season. Moore was on the ice for just 11 goals allowed, with his 35.29 percent of goals for the third-highest rate in the league amongst the 128 players with at least 90 minutes of time played on the penalty kill. Moore and Blake Lizotte formed an effective PK pair, at both ends of the ice.

Trending Down – Looking strictly at 5-on-5 play, Moore ranked inside the top 10 in the NHL in expected goals per/60 minutes at 1.02, equal to say Matthew Tkachuk of the Calgary Flames. In terms of actual goals per/60, Moore ranked outside the top 100 in the league, with a shooting percentage of 5.13, the fifth-lowest amongst skaters with at least 1,000 minutes at 5-on-5. The discrepancy between the two was the largest in the NHL, though his on-ice shooting percentage, accounting for others on the ice as well, was much higher when you factor in the goalscoring campaigns posted both by Danault and Arvidsson and the fact that Moore was

Regarding Moore’s production, the only downside you can really look at would be the first half of his season, when he recorded just seven points from October through December. Moore was scattered throughout the bottom six, playing both center and wing, and didn’t have the offensive impact that he did in the second half. As noted above, McLellan took much of the responsibility for that, and Moore produced in other ways while in those roles, but still a note regarding that discrepancy.

Of Note – This is a full line perspective, so something that we can share with Arvidsson and Danault’s points of view as well, but the trio was one of the best puck possession lines in the league. Among lines with at least 350 minutes together this season, that line ranked third in the NHL in CF%. In terms of shots for on a per/60 basis, they ranked second in the league in attempts for, something that led to the fourth-highest expected goals percentage.

2022-23 Status – Moore has one season remaining on the two-year contract extension that he signed at the draft in 2021, at a reasonable cap hit of $1.875 million per season. Moore will be an unrestricted free agent in the summer of 2023.

One would assume that Moore will enter training camp as the left wing on the second line, assuming that the Kings will opt to keep that unit together entering next season. That unit, as detailed above, was one of the most effective lines in the league from a metrics standpoint, with all involved complementing their impact throughout the season. Moore has outperformed the extension he signed last summer and will enter this season in a contract year, with the Thousand Oaks native detailing how much he enjoys being a member of the organization.

Insiders, for reference, I was out of the office last week, home for a week and not much attention was paid to moderation or interaction. Back in this week and will be sure that changes moving forward!