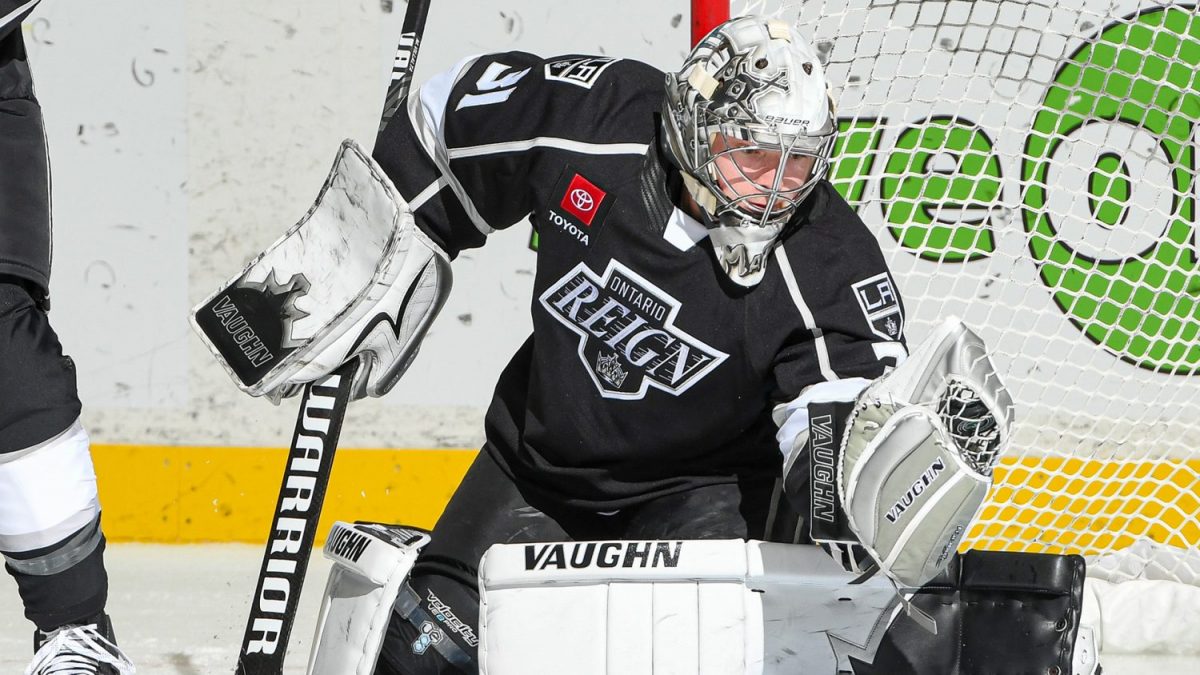 Many players on the Ontario Reign roster took the next step in their development this season. One of the names at the top of that list was goaltender Matt Villalta who had the best year of his young professional career. In his third campaign, Villalta managed new high marks in games and minutes played, wins, goals-against average and save percentage. Appearing in 46 of Ontario’s 68 games, Villalta was unquestionably the team’s No. 1 netminder.

Coming off a 2020-21 year which saw growing pains for the prospect, Villalta came into the 2021-22 season with a renewed confidence and energy after spending time during the summer working with the LA Kings’ goaltending development staff. Initially, he wasn’t slated to be at the team’s rookie camp, but became a late addition to the roster due to an injury and shined with a shutout of the Colorado Avalanche’s prospects in Arizona.

That early success served as a launching point for Villalta, who hit the ground running for the Reign by winning his first six starts to begin the regular season, giving up three goals or less in each of those contests. While that ended up being his longest winning streak of the year, Villalta also had a strong run of play just after the calendar flipped to 2022, allowing two goals or less in seven straight starts from Jan. 14 thru Feb. 11.

“Looking back at it, I definitely learned a lot,” Villalta said last month after Ontario’s season came to an end with a second-round playoff loss to the Colorado Eagles. I played in a lot more games this year which was very fun. I started to figure out taking care of your body and being a pro every day, showing up and putting the work in and just enjoying it. I thought overall it was a real great year and obviously I’m a little disappointed we didn’t get it done in the playoffs.”

Trending Up – Numbers aside, Villalta earned the respect of his teammates and became the rock they needed in goal during the regular season. Many of the team’s leaders were outspoken about playing in front of him and at the end of the day, that’s one of the most important characteristics you can have in a goalie – someone who the team not only has confidence in but also enjoys playing for.

“He’s got to be our best player every night and he usually is,” said TJ Tynan, Ontario’s leading scorer, after a playoff win over San Diego. “He’s the best guy to play in front of. He’s awesome, a great guy and a great goalie. To see how calm he is and how smooth he is, it’s fun to watch.”

With the league’s highest-scoring offense in front of him with guys like Tynan, who was named the AHL’s Most Valuable Player, Villalta certainly received a lot of support on the scoreboard. But he also had a knack for timely saves when opponents pushed back in the team’s own end. The Reign allowed the 10th-most shots per game in the league last season (31.26) and were out-shot in 40 of their contests, so even though there was certainly success on the offensive side of the ice, Villalta was plenty busy in the crease.

Villalta made 35 or more saves seven times during 2021-22, going 4-1-2 in those games to earn points in all but one of those instances. The Kingston, Ont. native’s 28 wins more than doubled his previous career-high of 10 and ranked as the third-most in the AHL. He also finished with the fourth-most games played in the league.

“As the year goes on and you start to play a lot more games, you feel more comfortable,” Villalta said. “You’re seeing all the plays coming down at you and just working on it every day you build confidence and you learn to trust your structure, and just believe in what you’re doing in the net. That also goes out to [goaltending coaches] Matty Millar and Adam Brown. Working with those guys every day we’re always constantly working on new things and refining my game. If you put the work in, you should be confident in what you’re going to do in the game and as the year went on, I felt more confident.”

Trending Down – Just like any goaltender, Villalta wasn’t perfect and had his off nights from time to time throughout the season. In facing the tough competition nightly throughout the Pacific Division, there were lower moments. But seemingly after each, Villalta bounced back quickly. His first loss of the season came on Nov. 12 in Tucson when he was pulled halfway through after allowing five goals. Villalta was back in the crease the following week for a clash with Stockton, the top team in the division, and backstopped Ontario to a come-from-behind win.

Similarly, he also had to come back from another poor performance in Tucson after conceding six goals on Feb. 26. Five days later against the same Roadrunner team, the Reign fell behind early with three goals allowed in the first period. But Villalta helped lead the team back, stopping the final 15 shots he faced over the last 44 minutes of action while Ontario scored four straight goals to pick up two points in an overtime victory.

It seems likely that the Kings will bring Villalta back in a similar role next season, as there are no expected goaltending changes for the NHL roster with Jonathan Quick and Cal Petersen as two established netminders battling each other for minutes and role. Once under contract, the expectation for Villalta will be to continue his progress at the AHL level, with an opportunity to be the first goaltender call-up. The 23-year-old has yet to make his NHL debut but did earn two recalls last year in emergency situations on Jan. 25 and May 13.

“I feel like this year mentally made me a better person and also a better goalie too,” Villalta said. “As the year went on, really understanding how you want to play the game and what works for you, say if you play a bad game one night, to reset, it’s a new day, and you just keep going. I feel like that was the biggest difference for me.”