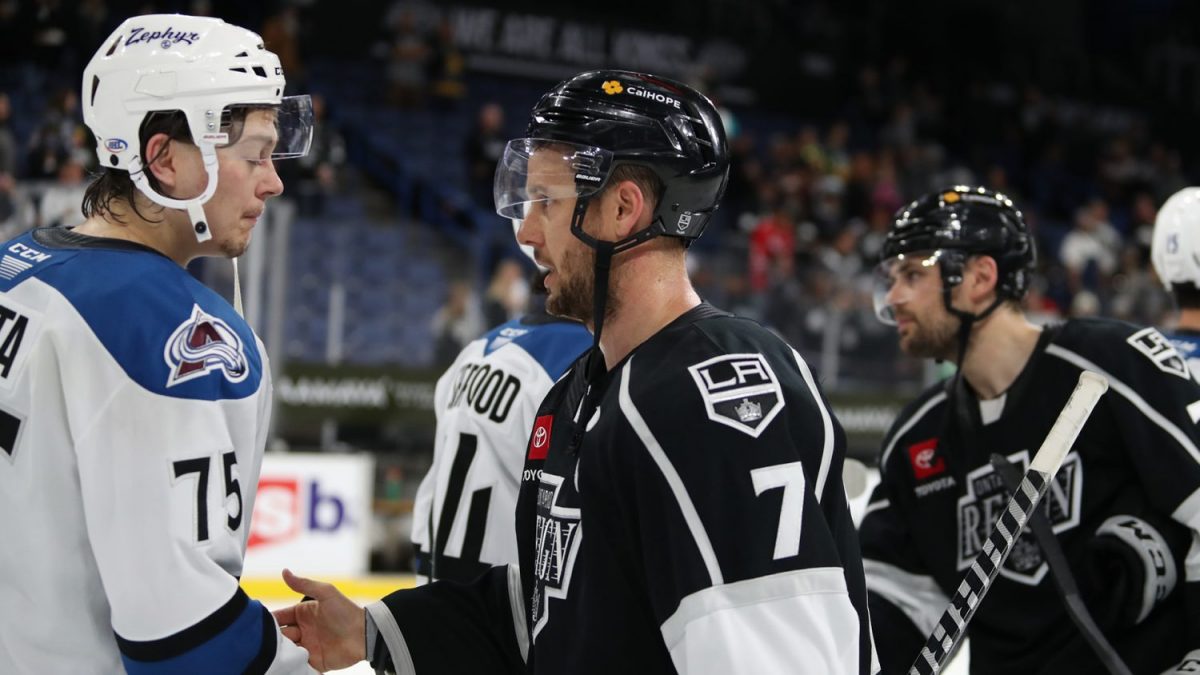 The Colorado Eagles got out to a lead and held off any chance of a comeback by the Ontario Reign to win their Pacific Division Semifinals series three games to none on Sunday night at Toyota Arena. Colorado ended the series with a 5-2 win, backed by two goals from Jayson Megna and multi-point nights by Jacob MacDonald, Mikhail Maltsev and Kiefer Sherwood.

Ontario’s goals in the contest were scored by Martin Frk and Samuel Fagemo, while goaltender Garret Sparks made his second consecutive start and stopped 28 shots in the loss.

The Eagles took the lead at 18:47 of the first period when Maltsev deflected a shot by Keaton Middleton by Sparks to make it 1-0 just before the first intermission.

Colorado stretched the game to 3-0 with two more goals during the middle frame before Frk got Ontario on the board in the last minute of the period, giving some life to the Reign’s offensive attack. Megna had the first strike at 2:57, before Stefan Matteau extended the lead at 16:48.

Frk got one back with 14 seconds to play in the second, blasting a slapshot to the top right corner of the net for his second postseason tally from forward Vladimir Tkachev.

But Ontario was unable to get any closer in the third, falling further behind at 4:29 when MacDonald made it 4-1.

Fagemo posted his third goal of the playoffs on the power play at 13:29, which turned out to be the final goal of the campaign for Ontario.

Megna put the game out of reach with an empty-net goal with 19 seconds remaining on the clock, securing the sweep for the Eagles.

For the second time in the series the two teams were even in shots on goal, each putting 33 at their opponents’ net. Colorado netminder Justus Annunen made 31 saves to earn his third win of the series and fifth of the postseason. Fagemo’s strike was the lone power play goal of the game, as Ontario went 1-for-2 on the man-advantage and the Eagles ended at 0-for-2.

Chris Hajt
On tonight’s game
First of all, that’s a very good hockey team on the other side. For three games, they played really good hockey. They’re a fast team that has four lines that can play, and six defensemen, and they’re goaltender played excellent, so give them a lot of credit for how they played and what they did. They’re a good forechecking team that was able to get in on the forecheck and force some turnovers. Tonight it was some rush opportunities that they scored on. They’ve got good team speed and ultimately we weren’t able to get it done with being over top and making sure our sort outs were good. I though Garret [Sparks] gave us a really good effort, especially in the second period, and was able to keep us in it. I’m definitely happy with him in these last two games and for the amount of time he missed, he played very well for us and gave us a chance to win. There were things that obviously we didn’t do well enough to win as a team that maybe we did well all year. It’s a learning experience for us as a group. It’s a really good group of guys in there that are definitely upset in that room.

On battling through adversity all season
Adversity comes in many ways and the guys handled it well. There was a lot of different things: injuries, COVID, call-ups, and all that stuff. Our guys, on any given night, rose to the occasion. I’m really proud of the group for the year that they had. Outstanding seasons by a number of individuals. Obviously, Tynan one the MVP and Frk and Spence getting on the all-star team, so a lot of good individual things happened and a lot of good team things happened to finished top-5 in the American Hockey League in the regular season. You learn from every single thing that you’re a part of and we need to learn as a group what it takes to learn in the playoffs against a really good team that ultimately deserved to win.

On the young players that blossomed this season
You can start with Spenny on the back end. He’s someone who earned First Team All-Star honors and played a very important role for us. Once Durzi got called up, he played excellent and he got his opportunity and took advantage of it. [Helge Grans] had a tremendous year for a 19 year-old kid who is mature beyond his years. He’s a kid that has a really good understanding of his game. He’s a very smart young man who has a bright future ahead of him. Up front you think of Tyler Madden coming back from injury. There were a lot of nights where you could say that he was our best forward before he got hurt. That’s just three to name a few.

Cameron Gaunce
On what didn’t work well for the team tonight
It’s a bit too raw to dissect too much. It’s hard to speak from a macro point of few. From a micro point, I didn’t create enough. When something like this happens, you try to figure out what happened. First thing, was the effort there? I think it was. Was the will and care there? I think it was. For my sake, the execution wasn’t there.

On what he’ll take away from this season
I think we had a number of unforeseen circumstances that came up throughout the year and I thought we did a good job dealing with it. I thought the ability of a lot of guys to deal with adversity was very commendable. It shows a lot about the players but also as people. As your career goes on, there are certain friendships and relationships you keep forever and certain ones you don’t. Not because you don’t like the person, but just because of your values and priorities. With this team, I can honestly count on more than one hand guys who I plan on staying in touch with for a long, long time. That’s something that I cherish in my life. That’s what I’m going to try to take away from this.