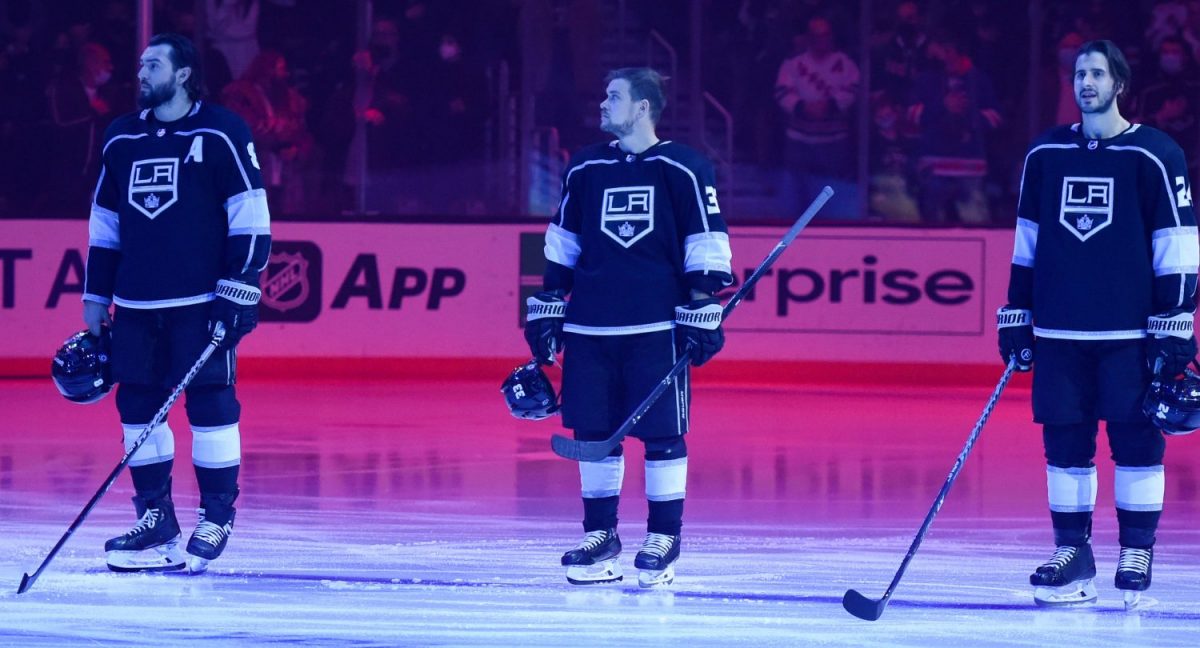 As Head Coach Todd McLellan said on Saturday, tomorrow begins the 2022-23 season. Now, on Day 2 of the 2022-23 season, we heard from a large selection of Kings players, as well as McLellan and General Manager Rob Blake, to dissect the team’s season, which ended in a Game 7, first-round elimination at the hands of Connor McDavid and the Edmonton Oilers, as well as look ahead at what’s to come.

Over the coming days, we’ll take an in-depth look at each of those interviews, with the key storylines from each individual to speak, but to start, a look at the tangible takeaways from today’s exit interviews.

Drew Doughty – Tendon Tear in Wrist. Even after surgery, Doughty said that he would have attempted to return to the lineup if Kings advanced to Western Conference Finals, and definitely the Stanley Cup Final. He expects to be ready and 100 percent for training camp in the fall, said that overall he feels good.

Viktor Arvidsson – Herniated Disc. General Manager Rob Blake shared today that Arvidsson will have surgery tomorrow to repair the injury that kept him out of the postseason. Arvidsson and the Kings tried to treat the injury so he could return during the first round, but a decision was made as a group to have the surgery, regardless of how Game 7 went on Saturday. Expected recovery is 3-5 months, with an expectation of a return for training camp. Arvidsson left the first practice of the postseason early and did not return to the group for the remainder of the series. Considering postseason hockey, information was at a premium, with today’s news confirming his absence.

Alex Iafallo – Shoulder. Iafallo noted a shoulder problem during his interview and complemented the Kings training staff for their help during the playoff run. “Feeling alright, obviously playoffs you get banged up, but the trainers have been awesome with taking care of everybody. You’re sore, but just rest, with the shoulder, but a few weeks and I’ll be fine.” Blake noted that three players specifically had separated shoulders, but did not confirm directly that Iafallo was one of those players.

Jonathan Quick – Quick did not indicate any injuries in his own exit interview, though Blake shared that Matthew Villalta was recalled from AHL-Ontario before Game 6 as a “precautionary measure” related to Quick, though Blake added that there was “no way” Quick was coming out of that series. Quick himself said he was fine, no issues, so we can assume precautionary is indeed accurate.

Sean Walker – Blake confirmed that Sean Walker has resumed skating in his recovery from a torn ACL, though there was no chance that Walker would have returned to the lineup this season, something both player and team knew. He’s exactly where he should be on the recovery timeline. “He should have a full summer of recovery in that aspect.”

Adrian Kempe – A restricted free agent during the offseason, Kempe was asked today if he would like to sign a long-term contract extension with the Kings. “Yes, I would.” Simply put. Kempe has one season left under team control before he would be eligible for unrestricted free agency. Blake shared that Kempe’s contract is the team’s top priority and that the two sides engaged in dialogue during the season, but both sides decided not to disrupt the player’s on-ice success/ Blake emphasized that the organization wants to reward players who developed with the Kings. “We will get on that for sure.”

Carl Grundstrom – Grundstrom will join Team Sweden at the IIHF World Championships. Sweden had just two NHL forwards on their initial roster and teams have the ability to add players eliminated in the first round of the playoffs. Grundstrom played in two World Junior Championships with Team Sweden as an underaged player and will now participate in his first, full international tournament for his native country. Todd McLellan noted that several teammates called Grundstrom the team’s most-improved player this season, something that carried over into playoffs.

Alex Turcotte – Blake shared that forward prospect Alex Turcotte suffered a concussion during Round 2, Game 1 of the American Hockey League playoffs with Ontario, costing him the remainder of his 2021-22 season. The concussion was his second of the season. The offender – Colorado’s Andreas Englund – was suspended one game for the illegal check to the head. Blake called the situation one the organization will need to monitor moving forward.

Additional Free Agents – Blake said that the staff has yet to sit down and really discuss the futures of most of the team’s unrestricted free agents. McLellan shared that those conversations could happen between coaches and management tomorrow. Blake noted a logjam on defense when factoring in players like Alex Edler and Olli Maatta, though was complimentary of both, especially of the way that Edler recovered and returned from his injury. He said Edler himself went to McLellan and asked to play when the team suffered so many injuries on the blueline. Blake added that defenseman Mikey Anderson, a restricted free agent, is “just as important as Kempe” when it comes to his contract. Reinforced that there is a desire to reward Kings draft picks for their development into NHL players.

Regarding all other players who spoke – Dustin Brown, Phillip Danault, Adrian Kempe, Anze Kopitar, Trevor Moore, Matt Roy – each either noted that they came out of the season mostly healthy, declined to share any injuries they were carrying or were not asked a direct question about their season-ending health. Blake indicated during his own availability that three players were playing with separated shoulders during the playoffs, with Iafallo saying himself that he had a shoulder injury in his availability.

Lots more to follow, Insiders, with several interviews to sort through and analyze. In total today, 9 players addressed the media during exit interviews, in addition to McLellan and Blake, with several storylines from both a team and individual perspective to follow in the coming days.

One final note – Regrettably, I was not able to attend this morning’s exit interviews in person, so I deferred to those who were there in person for social media updates. Retweet button was handy today. A huge thanks to Jared Shafran, who was on-site today to supply coverage from the event, and a huge thanks to those who were in attendance and asking questions to help provide this content. Once content is posted, you’ll hear the voices of the group of Dennis Bernstein, Jesse Cohen, Lisa Dillman, Daryl Evans, Dan Greenspan, John Hoven, Andrew Knoll and the prestigious Hoover throughout the session. Apologize to anyone I may have missed, but that group is responsible for acquiring today’s information. Throw them your appreciation for asking the right questions and your anger towards them for asking the wrong ones :). A lot of the former, however, in surfacing this level of information and that content to follow throughout the rest of the week.

As noted, Insiders, more to follow. Expecting to see video and audio content come out from today, which we will share here along with breakdowns and analysis from the final media availabilities of the season.

By Jack Jablonski
337 Comments
Behind the Scenes