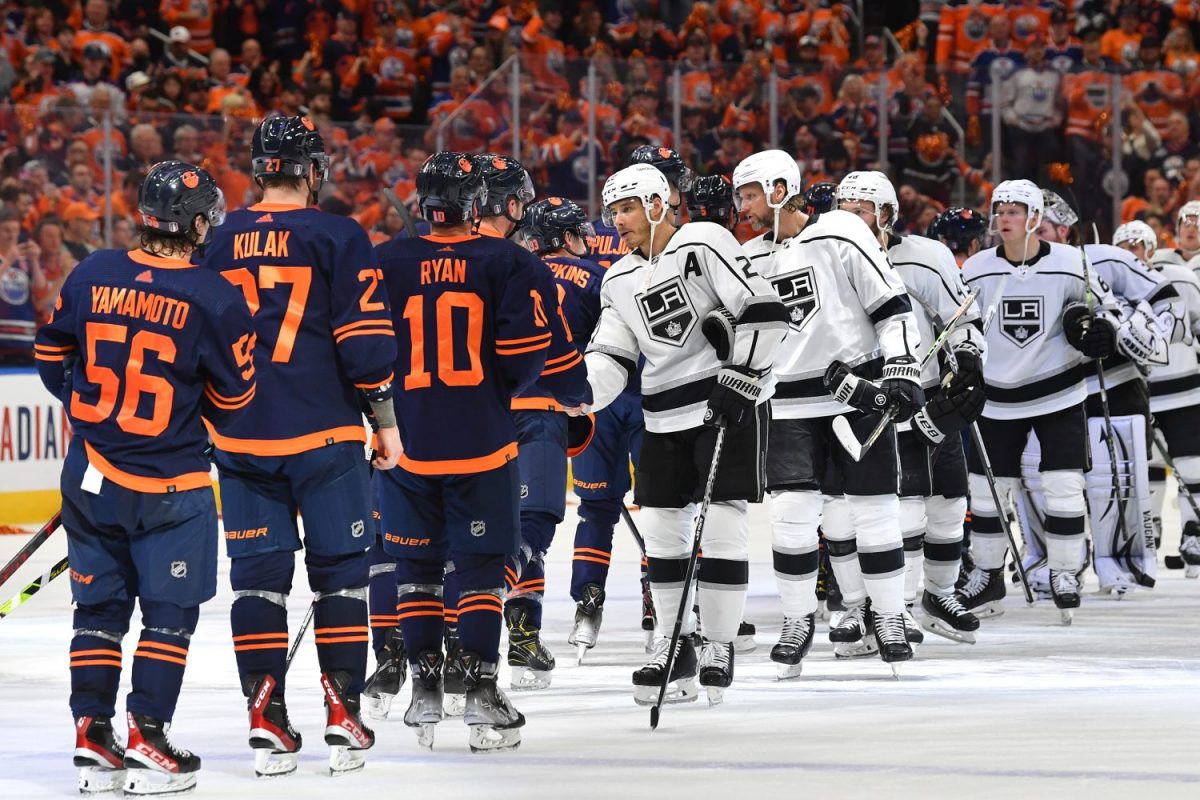 The LA Kings saw their 2021-22 season come to an end on Saturday evening at Rogers Place in Edmonton, with a 2-0 loss in Game 7 of the first round of the 2022 Stanley Cup Playoffs.

The teams played a relatively even first period, with neither team able to take control of the game in the opening 20 minutes. Shots on goal read 10-7 in favor of Edmonton, shot attempts 24-22 in the Oilers advantage.

The Oilers began to seize momentum in the second period, however, with a 42-18 advantage in shot attempts throughout the frame. Edmonton opened the scoring on the evening 33:15 into the game, as defenseman Cody Ceci scored his first goal of the postseason, a wrist shot from the right-hand circle, to put the hosts ahead 1-0 at the second intermission.

After a third period that featured few offensive opportunities, but several important saves by Jonathan Quick, the Oilers eventually put the game away through Connor McDavid with just under four minutes remaining in regulation. McDavid collected his own rebound, drove to the front of the net and roofed a backhanded effort on the third opportunity, adding an insurance goal and putting the game away for good.

Despite pulling the goaltender, the Kings were unable to break through offensively and find a goal to pull any closer than 2-0, which went down as the final scoreline of the 2021-22 season.

"I think the experience we got this year is going to bring us a long way."
Unfortunate ending, but Phillip Danault is already looking ahead to the future 👑@LAKings | #GKG pic.twitter.com/zlz3mBaawN

Anze Kopitar
On the balance in the moment between disappointment in Game 7, versus pride in the team over seven games
Right now, it’s very frustrating, obviously. The series was hard-fought, we gave it our all and we should be proud of that. I think there was certainly an element of growth within the group and throughout the season, even throughout the playoffs, it just didn’t go today and it’s extremely frustrating because we came in here believing that we can get it done and we didn’t.

On a couple words on Dustin Brown after his last game
I’ll miss him a lot.

On if he liked where the Kings were at after one period
We would have liked to have spent more time in the offensive zone, but 0-0 at any time on the road is not bad, when you don’t have your best stuff. We felt like we were in a good position, but we just couldn’t get it going.

On Jonathan Quick’s play tonight
It was still 1-0 going into the third, it’s one shot away, we just couldn’t get any sustained pressure going to break it down. We had some good looks, but they did a good job in the defensive zone and we just didn’t generate enough.

Todd McLellan
On the small picture disappointment versus big picture pride
I think they’re small picture, big picture. Small picture, we’re disappointed. We, I, on behalf of the group, said we’re in this to win it. We weren’t just coming here to gain experience and when you’re all in, and you want to win and you don’t, it’s disappointing. There’s a lot of water-filled eyes in there, grown men, that are feeling that way, because we were all in and it stings right now. Now, there’s the other side of the coin, where the organization, four years ago, came up with a plan about transforming the team, changing the way we play, the identity of the group, bringing younger players in, relying on the older, veteran players and that was a positive throughout the year. Obviously the injuries were something that we had to overcome, but that’s just a part of year-long adversity. We got a good lesson in dealing with that, we’d like not to do that again. I thought there was growth, not only in our young players, we talk about them all the time. We talk about the young draft picks coming and doing their thing, I thought there was growth in some of our older players as well, adapting to a new way of playing, adapting to different roles. Small picture, a lot of pain right now. Big picture, some satisfaction and I’ll finish my statement off by saying that tomorrow morning, next year starts and based on experience, that’s going to be one, tough year.

On Jonathan Quick’s performance tonight
I don’t even know what to say, I’ve watched it from four different benches in the National Hockey League and now I get to watch it from ours. An outstanding effort by him. Let’s face it, especially in the second period, we were under siege. I liked our first period, the second they had a step up on us every shift and we were receiving for almost 20 minutes straight. Quickie played outstanding, he gave us the chance to pull the goaltender at the end and I don’t know what else we can ask of him.

On the importance of this group experiencing what it takes in a Game 7
This word experience has come up for the whole players, gain it, gain it, gain it. Experience is only good if you do something with it. If you’re just going to throw it in the closet when you get home, whether you’re old or young, it’s useless. Our younger players in particular, whether you played in the series or not, you gained experience and it’s what are you going to do with it now. That’s why next year, starting tomorrow, is going to be one tough year, based on experience I have and they will be told that. There’s a lot of growing up that some of them need to do, they can do it and they will do it.

On if there’s anything the Kings could have done in the second period to swing momentum
I get asked that question after every game, what could you have done, sometimes it’s what the other team was doing. They played a hell of a game. They are figuring some things out there and I thought we had a great first period. The difference between the two periods was that in the second period, any puck we got to, we couldn’t connect from one player to the next to get it going. We would just about connect, or we couldn’t make the second play and it countered and came back into our end. If you don’t connect on the first opportunity you have against that team, you spend 30 seconds in your zone and you survive. You can’t be teams, obviously Edmonton in our case, when you’re just surviving. Third period, I thought we got it back again, but the second period cost us.

On Dustin Brown, who played his final NHL game tonight
Yeah, as I mentioned, the hurt the locker room was deep team-wise, but it was very deep for Brownie. It’s very rare in this sporting world, let alone hockey, that one individual spends that many years, wins championships and finishes the night with his team. Emotions were high for two reasons. One was the team lost and one was Brownie’s last night.

The Kings will fly back to Los Angeles tomorrow and will hold exit interviews at a later date in Southern California.