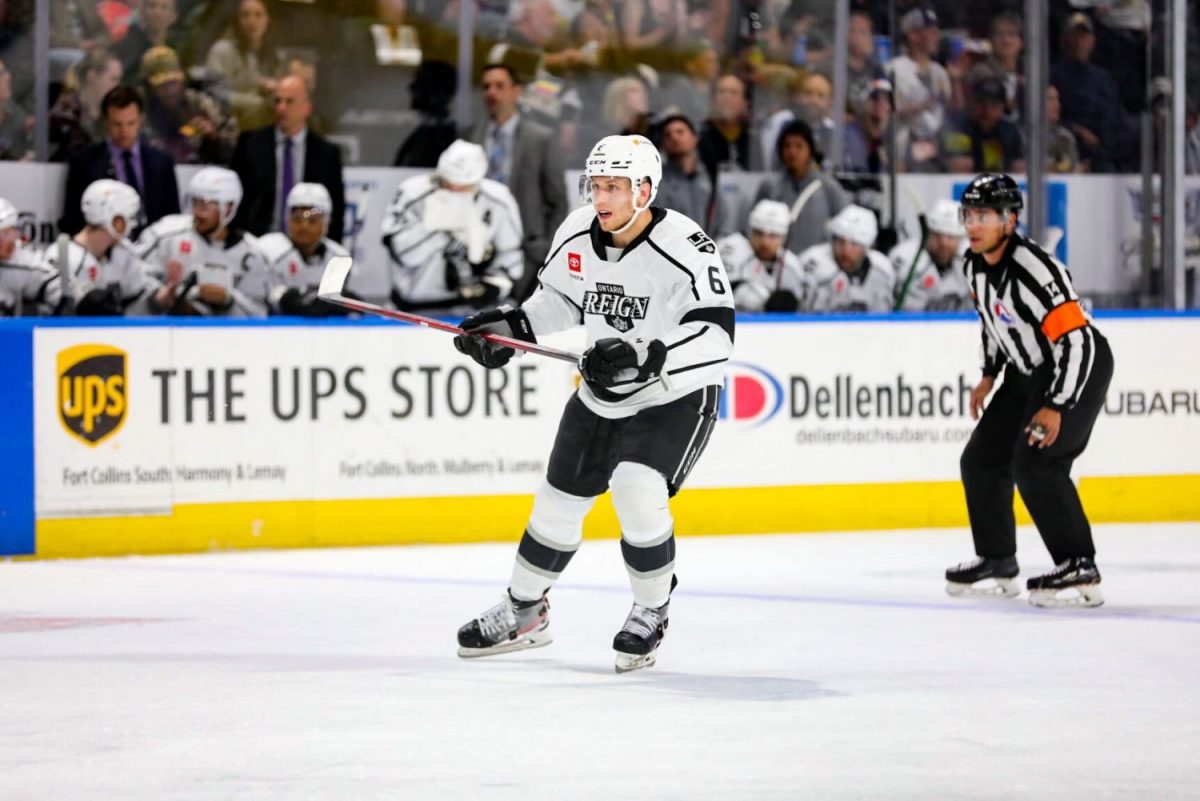 Jean-Luc Foudy scored at 13:37 of overtime to send the Colorado Eagles past the Ontario Reign by a 5-4 score in Game 2 of the Pacific Division Semifinals Friday night at the Budweiser Events Center. The Eagles hung on after Ontario completed a furious comeback in the final minutes of the third period to force overtime, scoring two goals in a span of 2:14. The decision gives Colorado a 2-0 lead in the second-round best-of-5 series.

The Reign got goals from four different skaters in the game, including defenders Nelson Nogier and Frederic Allard, as well as late strikes from forwards Akil Thomas and Vladimir Tkachev. Goaltender Garret Sparks made his first start and appearance of the postseason for Ontario and turned aside 36 shots in a losing effort.

The teams were even after one period, with Colorado taking an early lead on a power play goal by Jordan Gross at 11:26 before Nogier tied things up at 1-1 with his first career postseason goal at 17:09 from Thomas Hickey and Martin Frk.

A goal at 2:30 of the second by Colorado’s Jayson Megna put the Eagles back ahead 2-1, but it was the lone tally of the period in a frame that saw Colorado hold an 18-9 edge in shots on goal. Ontario entered the third trailing by a single tally.

The scoring in wild third period began with Allard evening the game at 2-2 by scooping up a loose puck as he exited the penalty box and moving in on a breakaway before beating goaltender Justus Annunen with a quick shot. Allard’s second career playoff goal came unassisted at 8:13.

Moments after the tying goal, Frk had a chance to give Ontario the lead but hit the post with his shot. Then the Eagles moved down to the other end of the ice and cashed in on an opportunity when Ryan Wagner found the back of the net at 8:58 to put his team back in front at 3-2.

Colorado added on to their lead and took a two-goal advantage for the first time less than four minutes later on Megna’s second strike of the night off a 2-on-1 rush at 12:46.

The Reign continued to battle for opportunities to get back in the contest, but weren’t able to get anything to show for their chances until they pulled Sparks for an extra attacker with just under three minutes remaining. First, Thomas made it a one-goal game again with his fourth goal of the playoffs off a pass by Tkachev at 17:46. Thomas had space on the inside of the right circle and used a quick shot to beat Annunen.

Then, needing only one shot to tie the game, Ontario went back to work and were able to get Sparks to the bench for a second time. With 33 seconds left on the clock, Tkachev wristed a shot from the left circle to the top right corner of the net that tied up the game at 4-4 and forced overtime. Tkachev now has five points in postseason play for the Reign after the team’s first four games.

Ontario had its chances in the extra session, earning two power play opportunities that came back-to-back at 2:25 and 4:28 of overtime. But none of their seven shots on goal got past Annunen, who held on for the victory. The Reign found themselves on a lengthy shift in their own zone with tired legs on the ice and Foudy took advantage, using a shot that squeaked in between the legs of Sparks and trickled over the goal line to win the game.

Annunen registered 32 saves for Colorado in a losing effort, while the Eagles outshot Ontario 41-36 in the contest. The Eagles won the special teams battle for the second straight game in the series, converting on one of their seven power play opportunities while the Reign ended the game with an 0-for-5 mark.

Chris Hajt
On the team’s late effort to tie the game
That’s the biggest thing. You’re down by two goals, pull the goalie, and then score two goals. Credit to our guys for continuing to play and continuing to push. This is playoffs. Anything can happen at anytime. I’m happy with the guys to be able to do that. Again, I’m obviously disappointed we weren’t able to get it done. We had opportunities in the overtime period but we weren’t able to get that last goal. We’ll take the positives from it and move on to Sunday and get back home.

On goaltender Garret Sparks
Garret came in and played really well for us. He was really solid, looked big in the net, and made some huge saves when we needed it. Again, I’m really happy with his effort today.

On Vladimir Tkachev’s game-tying goal
Vladdy just makes plays. He’s cool as a cucumber with the puck. He has great vision and a great ability to make things happen and he definitely did that tonight. We need him to continue to do that.

On the team’s strong penalty kill effort
Sparksy, first of all, played really well tonight. He made some huge saves on the kill. The guys that killed penalties, they sacrificed with lots of blocked shots, lots of really good clears, and plays that we wanted to respond with after last game. It was a really good job by them and we’ll look forward to Sunday.

On the quick turnaround to Game 3
That’s the name of the game. That’s playoffs. You’re going to have a lot of games in a short amount of time. You need rest, recovery, a lot of fluids, and everything that you need to do to do your best in Game 3.

Christian Wolanin
On fighting through adversity in Game 2
It was an up and down game. There was a lot of adversity…it’s tough to play in. We were on the kill all night again, which is another tough part. All excuses aside, its stinger to be honest. When you show that much resilience and heart to come back and tie it up when all hope is lost, so to speak, and then just lose off a squeaker like that, it just really stinks. But to go on a positive note, it’s not over until it’s over.

On the team’s strong effort in the overtime period
It was a shootout. We were going back and forth and I think we probably outplayed them a little bit in the overtime. We had our chances for sure, but just individually, I’d like to make a better play there at the end there to Vladdy. Then we go down in our own end, ice it, and then was hemmed in for a bit, and again [it was] a squeaker. Credit to Sparksy. [Garret Sparks] was unbelievable for us tonight stepping in, being a great mentor back there and just a great teammate. It stings really bad that we couldn’t get it for him too.

On Vladimir Tkachev’s game-tying goal
It was just awesome. There was just so much adversity and ups-and-downs throughout the game. For him to bury it for us like that, it was just great. It was short-lived but there was a lot of adversity. It showed a lot about our group and I hope we can remember that going into these next three games.

The Reign have their backs against the wall and need to win the remainder of the games in the series to keep their season alive, starting with Game 3 on Sunday night at Toyota Arena at 8 p.m. PST.