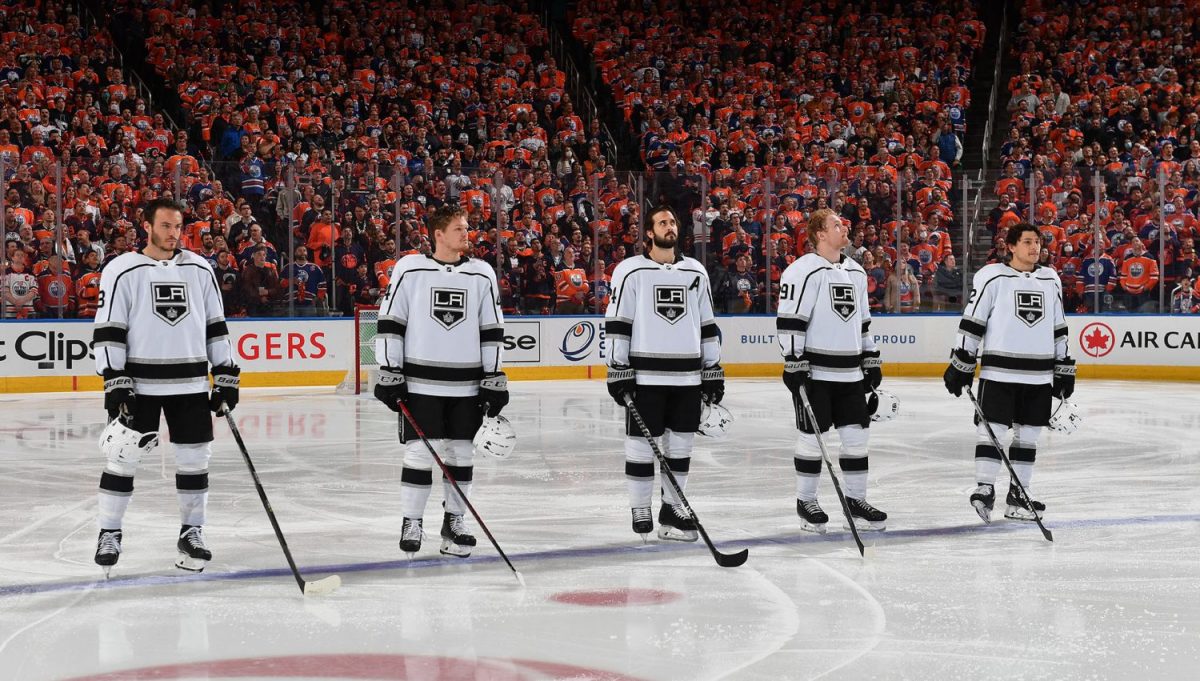 Back in Edmonton, Insiders!

The Kings held a short team practice in El Segundo, which preceded the flight to Alberta. The series structure has seen games played every other day, with practice time at a premium and the focus at this stage not really about on-ice instruction and more on maintenance and energy levels.

With that in mind, there were no formal line rushes during today’s practice. As a reference, here’s how the team lined up last night, with nothing staggering in terms of changes coming from today’s skate –

The Kings made lineup moves during Game 6 last night, using a variety of different combinations for a shift here and there during the game. Arthur Kaliyev and Carl Grundstrom saw around five minutes combined on the top line, alongside Anze Kopitar and Adrian Kempe. Alex Iafallo, who played the bulk of the game in that spot, saw more than four minutes split between the other three lines. Different players for different situations, with coaches using every last move in their arsenal with seasons on the line.

As always, we’ll wait for the song tomorrow morning. As Todd McLellan noted the other day, it’s that time of the year when lineup information is protected and roster moves are made cautiously. We saw it with Edmonton yesterday, with morning reporting signalling a 12-6 look that turned out to be an 11-7 alignment, with lines crisscrossed throughout the game. Until tomorrow we wait.

Game 7 Anticipation
The dust has settled after last night’s defeat and though the Kings were disappointed not to have gotten the job done in six games, that’s now in the past. It has to be. Now, the focus is on to the excitement of a Game 7.

For veterans like Anze Kopitar, he’s been through four Game 7’s in his career, though he hasn’t played in one since the 2014 Western Conference Finals. Kopitar is one of five Kings expected to dress in Game 7 with three or more games of experience in those situations, with the duo of Viktor Arvidsson and Drew Doughty also in that boat but unable to play due to injury.

“It’s been awhile,” he said. “We’ll refocus, do whatever we need to do to get fresh, to get focused again and then we’ll go up there and try to win a game.”

Joining that group with experience in a Game 7 is forward Trevor Moore, who took part in one between Toronto and Boston during his only prior postseason experience entering this season. Moore talked about the situation going into his first game seven and how now, a few years later, his new team is excited for the opportunity tomorrow.

“You’re nervous, but it’s also such a cool opportunity,” he said. “You grow up watching the playoffs and Game 7 and we’re all grateful for this opportunity, we’re looking forward to it. In that series, they had a better start than we did and that ended up costing us, so we’ll have to have a good start and push from there.”

Then there are the first timers, who have never featured in a Game 7 in their careers. Your Mikey Anderson’s, Matt Roy’s, Adrian Kempe’s among the higher-minute players, and many of the lower minute players, including important members of this team such as a Blake Lizotte, Sean Durzi or Arthur Kaliyev.

Anderson talked at the beginning of the playoffs about the differences between playing in a seven-game series and playing in a high-profile game like the NCAA National Championship Game, in which he appeared twice in his collegiate career. In that comparison, it was a focus on both playing seven games versus one, and the concept of home buildings as opposed to a neutral site. One of those storylines has changed, with it now being winner takes all tomorrow night, though it’ll be in the unfriendly road confine in Edmonton.

“It’s fun, it’s exciting,” Anderson said this morning. “It’s something that not a lot of us in there have never gone through, but we have the leaders who have been here before, so I’d say we’re going to keep leaning on them. They’ll be able to prepare us as much as they can, keep everybody loose and go from there. It’s exciting for sure.”

A Loss Is A Loss
“A win is one and a loss is one, no matter what happened, we’re going to watch the video, clean things up and move on to the next one.”

That was Trevor Moore’s take when asked about the differences in turning around last night’s game, which was more or less a one-goal loss, and a game like Game 2 or Game 3, which were a pair of six-goal defeats.

Anze Kopitar put it the same way after the game last night, it’s the same thing and now the Kings have to prepare for one game.

Though the feelings may be different from say a 4-2 loss with an empty-net goal, versus an 8-2 loss that was decided significantly earlier in the game, it’s just a loss at this stage. Mikey Anderson touched on that side of things, with a look ahead to simple looking at doing whatever it takes to get in a win next time out.

“Sometimes the feeling is maybe different, but basically the score is just the games at this point, you lose by 10 it doesn’t matter, you guys go down one game in the series or vice versa,” Anderson said this morning. “At this time of the year, it’s just trying to do whatever you can to help the team come out with a win, take it game-by-game.”

His defensive partner, Matt Roy, touched on taking the right things away from playoff defeats, regardless of the outcome, and fixing what needs to be fixed.

There’s an importance to doing both of those things, making the necessary changes and also trying to emphasize the things that went well.

“It’s never good to give up six goals, or eight goals, but at the end of the day, a loss is a loss,” defenseman Matt Roy said. “Even in those games, we take the things we thought we did well, we try to keep those going and [in Game 6], there were some things we needed to change, too. I think either way, if you lose, you have to just fix things and move forward.”

Move forward the Kings will, with a shot at advancing coming up tomorrow night.

Defending The Pair
While the Oilers did their best to get their top two centermen on the ice in all situations, they made a concerted effort to play them together in Game 6. Using Natural Stat Trick for the data, here’s a breakdown of Connor McDavid and Leon Draisaitl, playing together, throughout the series.

As Game 5 in Edmonton went along, with Edmonton trailing 4-2 in the third period, the Oilers opted to load up a line with their two big guns playing together. That carried over into much of Game 5, with Jay Woodcroft and his staff playing McDavid and Draisaitl on a line for around 75 percent of the time.

The duo was on the ice together for the game-winning goal late in the third period, the only of the four Edmonton tallies they were on for together, though McDavid himself was on the ice for all four Oilers goals in the victory. They were also both out for Carl Grundstrom’s equalizer early in third, meaning that although Edmonton controlled more than 60 percent of shot attempts and scoring chances, the net in terms of goals for and against was 1-1.

McLellan felt that, overall, the Kings did a decent job of defending against the pair, though he lamented the play leading up to the eventual game-winning goal. Speaking with Mikey Anderson, who played a team-high 13:31 against McDavid in Game 6, and Trevor Moore, who played 11:10 himself, there are natural challenges to defending as a duo that talented, as well as individually. The Kings are certainly aware when the pair is on the ice.

Moore – You obviously can’t give them anything, but if you’re on your heels the whole night, just thinking that we have to defend these guys, they’re going to make plays, they’re just too good. You have to try and make them play defensively as much as you can. You give them an inch and they’ll take it, one mistake against those guys can end up in your net really quick.

Anderson – I think it’s just trying to see some of their tendencies and what they like to do. Obviously they both have really good skill, kind of in different ways. Draisaitl has a bigger body, he’s good at protecting pucks, McDavid has the tight, escape turns and he can accelerate out of them pretty quick, they both protect the puck super well. You throw when on the ice together, you have to know where they’re at, do your best to stay tight to them and not give them a whole lot of time and space, because whatever you give them, they’ll find a way to make a play.

How both teams will line up in Game 7 still remains to be seen. Though they played most of the game together, McDavid and Draisaitl each centered separate lines throughout the game as well. With the Kings mixing and matching a bit as well during Game 6, we’ll see how things develop over the next 24 hours.

We’re here, Insiders. Do or die in Game 7 tomorrow evening. Full preview and gameday coverage to follow as the Kings look to secure their first series victory since the 2014 Stanley Cup Final!