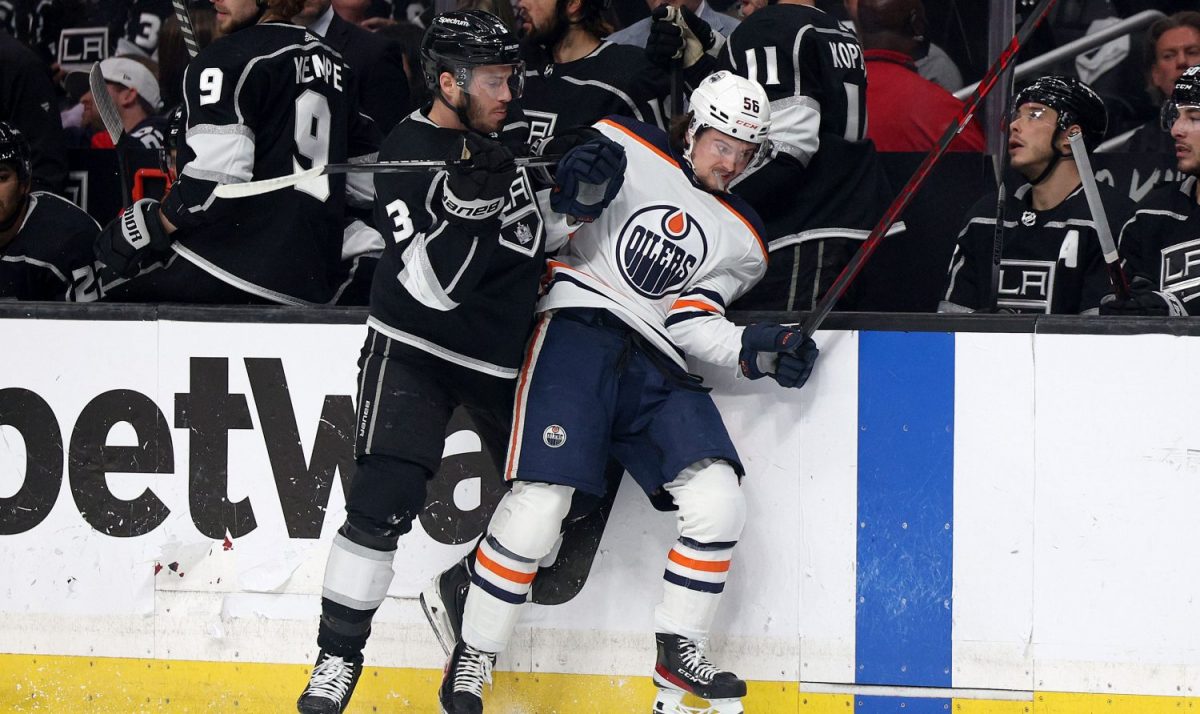 The most famous words in sports – There will be a Game 7.

The Kings had the first crack at ending their first-round series with the Edmonton Oilers yesterday on home ice. After a “tentative” start, in the words of their captain, the Kings battled back from a 2-0 deficit to tie the game less than a minute into the third period. The fight was there in the response, bolstered by a power-play goal of all things, but eventually wasn’t meant to be, as the Oilers capitalized on what the Kings felt was their mistake to find a late winner to send the series back to Edmonton.

The Kings likely will rue the fact that they started the game the way they did. Anze Kopitar used the word tentative, as noted above, with the thought of clinching a series perhaps creeping into the mind a bit too much in the early goings while Head Coach Todd McLellan talked about the “quarterback / receiver” connection being off. As we’ve discussed throughout the season, when the Kings pass well, they play well and throughout the majority of the first two periods, the Kings didn’t pass well, both from a distribution standpoint and a receiving standpoint.

“I think the passing will lead to a lot of things being done better,” McLellan said after the Game 6 loss, looking ahead to improvements in Game 7. “It will make us faster, cleaner, all of those types of things.”

For all that went wrong, however, the Kings found themselves down just 2-0 as we passed the halfway mark in the game. There were elements of Games 2 and 3, with McLellan comparing those two lopsided losses in terms of how the Kings passed the puck, but the deficit was obviously more manageable. The Kings defended substantially better than they did in those games and got good goaltending, keeping within striking distance, in need of a spark. For the first time in the series, they got that spark through special teams.

Sean Durzi scored a power-play goal, with the Kings putting together a strong penalty kill in the minutes shortly thereafter. That swung the momentum in the direction of the Kings headed into the third period, which they capitalized on through Carl Grundstrom’s early goal.

“Everyone knows that special teams in the playoffs are huge and our top unit got us a big goal there and we had a big kill right after that,” defenseman Matt Roy said. “That was definitely a big push for us, I think it got the crowd into it and it gave us that jolt in our system and gave us that belief factor that we needed.”

In the end, though, it wasn’t meant to be. Even as you could feel the Kings picking up as much momentum as they had on the evening, it was still largely Edmonton that had the more threatening opportunities. LA had its second-lowest totals of the series in terms of shot attempts, scoring chances and high-danger chances in Game 6, with Kopitar noting the lack of shot volume after the game as an area for correction in Game 6. The Kings have been that volume-shooting team all season, capitalizing on puck retrievals to create additional opportunities and translate that into offense. In that part of the game, they fell short with an opportunity to clinch the series on the line.

At the same time though, I think the biggest difference between say the Game 3 loss and the Game 6 loss came with how the team stepped up and defended. Even with Connor McDavid and Leon Draisaitl playing on a line, the Kings defended much better than they did in their other losses during this series, and even during stretches of their wins. After conceding 10 high-danger chances during the first period, the Kings gave up just five across the final 40 minutes of play. In the opening period, 36 percent of Edmonton’s shot attempts were high-danger chances. In the final two periods, that number was just 14 percent. That made the game-winning goal for the Oilers that much more difficult to take for the Kings, because it was a rare misplay on an evening when they were pretty compact in a losing cause.

The messaging was pretty consistent from players and coaches after the game last night. There’s no fear in going on the road for this game, with the Kings already winning twice in this series in Edmonton. No motivation or explanation is needed from coaches or leaders, this is a situation that really explains itself. Perhaps most importantly, the moment doesn’t appear in any way to be too big for this group, experienced at one end and youthful at the other. And that’s an important thing.

“Everybody’s stepped up, I think everybody is an important part of the big picture,” Kopitar said. “We all need to play at our very best if we want to win hockey games, that’s shown throughout six games and I’m sure it’s going to be no different on Saturday. Again, I have the confidence that we’ll get ready, get up there and throw everything we have at them.”

With how the Kings have responded with their backs against the wall all season, with how they’ve played on the road and with how they’ve handled adversity, we’ll expect to see nothing less than everything they’ve got come tomorrow evening. And that right there is Game 7 personified.

There’s no need to prop anyone up, no need to sell this moment as any type of experience for the Kings. The moment sells itself and the Kings believe they will be ready when the moment arrives.

“I don’t think I’m going to have to go in there and give them a ‘let’s win one for the Gipper’ type speeches,” McLellan added after Game 6. “There’s enough leadership in there and there’s enough proud guys in that room. We’re going to go play a hockey game. We believe at the end of the night that we can win, but we have to be at our best. There’s no “B” game wins at this time of the year and that’s player one through player 20. If we’re losing 2-3 players, it won’t happen for us and tonight we were just about there, short a couple of guys, but we’ll find them.”

The Kings hit the ice for a short team practice today at Toyota Sports Performance Center, before the team departs for Edmonton later on today. Will have quotes from defenseman Mikey Anderson and forward Trevor Moore coming up from after today’s skate later on in the day, as well as post-game notes and quotes from the Ontario Reign’s Game 2 in Colorado, coming up at 6 PM Pacific.