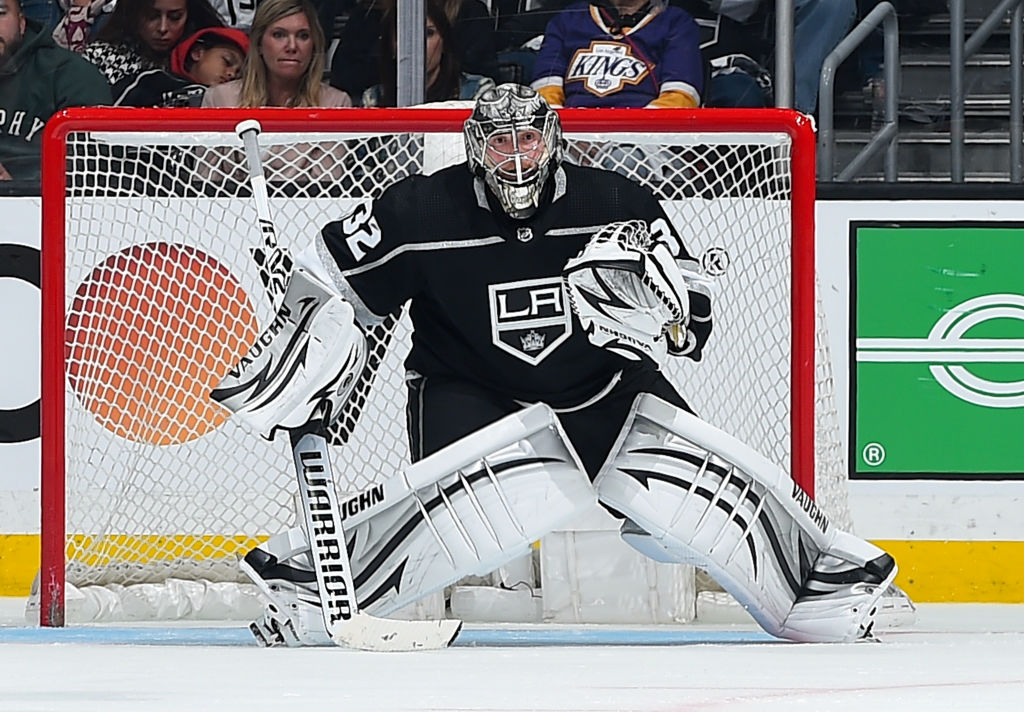 The LA Kings evened their first-round playoff series at two games with a 4-0 victory over the Edmonton Oilers on Sunday evening at Crypto.com Arena.

The Kings got a 31-save shutout from goaltender Jonathan Quick, his tenth career playoff shutout, in the victory. Forward Carl Grundstrom scored twice in the victory, while defenseman Troy Stecher and forward Trevor Moore also scored.

The Kings jumped out to their first lead since the third period of Game 1 with the game’s first two goals and the only goals of the first period.

First, Phillip Danault stripped the puck free deep in the offensive zone and showed poise in executing a drop pass to Moore at the back post for a tap-in, his second goal of the series and the game’s first goal. Later in the frame, Stecher scored his first playoff goal as a King, in his first postseason game with the franchise. Stationed on the right wall, Stecher sent a shot on net that deflected off of Edmonton defenseman Duncan Keith’s stick and in for a 2-0 lead.

After a scoreless second period and a third period that went that way for the bulk of the way through, the Kings finally added an insurance goal with just under five minutes remaining through Grundstrom. The bruising winger shook off his defenseman, drove to the net and powered the puck home while falling to the ice to push the advantage to three goals. Grundstrom’s goal was his first career postseason goal and it gave him a multi-point night.

Grundstrom added the empty-net tally inside the final two minutes to push the score to a final of 4-0, giving Grundstrom a two-goal game and a three-point night.

On the Kings playing to their identity tonight
I mean, we played the game that got us to the playoffs. We got pucks deep, we forechecked, blocked shots, pucks to the net and rebounds. We play that way, we can be successful.

On having Carl Grundstrom and Troy Stecher step in with big goals
It’s huge and we’ve been getting that all year. Guys in, injuries, whatever happens, guys have jumped in and it’s a next-man up mentality. They did that well tonight.

On making the save without the glove on
You see the puck and you try to get something on it.

Todd McLellan
On the difference between Games 2 and 3 and tonight’s win
I could tell you that we didn’t play very well for two games and I could tell you that we played better tonight to a man. It wasn’t 100 percent better, it was only like five percent better per player, but we did some of the things we needed to do to win the game and we hadn’t been doing that since Game 1.

On the team’s rally back tonight after the defeats in Games 2 and 3
Well, our team believes in themselves and what we stand for. We just had to get them back to playing that way and believing in it. We can’t go to the table, if you will, and put all of our chips in on one play, we have to manage them all night and we did a better job of that tonight.

On the penalty kill tonight, and its improvements
Well, let’s face it, they had at least one power-play goal in every game, so it’s 1-0 when the night starts. They were that good and they are that good. Odds of going without a penalty throughout the night are slim to none, so our group had to step up. It starts with the goaltender, he made some outstanding saves when he needed to and then some of the players around him did what they needed to do, so that was a good sign. I thought our power play began to show a little sign of life, so we’re improving. Our team still has to improve in the playoffs. The question I’m going to ask our guys is have we learned our lesson yet, because we won Game 1 and then we did nothing in Games 2 or 3 that even remotely looked close to us, so we have to continue with it, so have we learned anything throughout the series. It doesn’t mean it’s going to be easy and it doesn’t mean we’re going to win, but we need to do certain things to have a chance. We’ll see if we’ve learned.

On if there was a moment when he felt he knew the Kings were playing their brand of hockey
Our starts haven’t been bad, so I can’t tell you it’s the first period, but there were situations in the game that we played differently. It can’t explain the X’s and O’s, but by the eye, some of the things that we needed to do, but didn’t do, while we were getting drilled we did tonight and it helped us

On Jonathan Quick’s play tonight
There were some questions that I answered about goaltender decision and it wasn’t a hard one for us. That’s not a comment to demean Cal Petersen, because he’s a hell of a goaltender, but if there was ever a night we needed somebody that’s been there and done it, it was tonight.

On Mikey Anderson’s game tonight
He’s had a pretty young career so far, but we talk about Mikey like he’s a ten-year veteran. The way he carries himself, the minutes that he’s hauled and played, he missed a month, two months almost and he’s getting his legs underneath him. I think he’s gaining confidence, night after night and that has to be one of his better outings, I think that’s a good, accurate observation.

Notes –
– Jonathan Quick stopped all 31 shots he faced (sixth-most all-time by a King in a playoff shutout). It marks Quick’s 10th career playoff shutout, the most ever by an American-born goaltender, surpassing Mike Richter. It is also tied for the 11th most by any goaltender in NHL history. The shutout marks the first one by a King since June 9, 2014 (Quick vs. NYR in Stanley Cup Final). It was also his 89th consecutive postseason start, tying Pekka Rinne for the fourth-longest streak in NHL history and the longest active.
– Carl Grundstrom (2-1-3) recorded his first career postseason points, as he led all Kings with a three-point night. Grundstrom’s multi-goal game was the first by a King since Jeff Carter on May 21, 2014 (WCF, Game 2 vs. CHI).
– Trevor Moore (1-1-2) scored his second goal of the postseason. His five points (2-3-5) are the most on the team.
– Troy Stecher (1-1-2) made his Kings postseason debut and scored his third career playoff goal and first career multi-point game.
– Forward Phillip Danault, Dustin Brown, Alex Iafallo and Blake Lizotte each recorded a point, the first playoff point of Lizotte’s career.

The Kings are scheduled to practice tomorrow morning at 10 AM at Toyota Sports Performance Center, before departing for Edmonton.