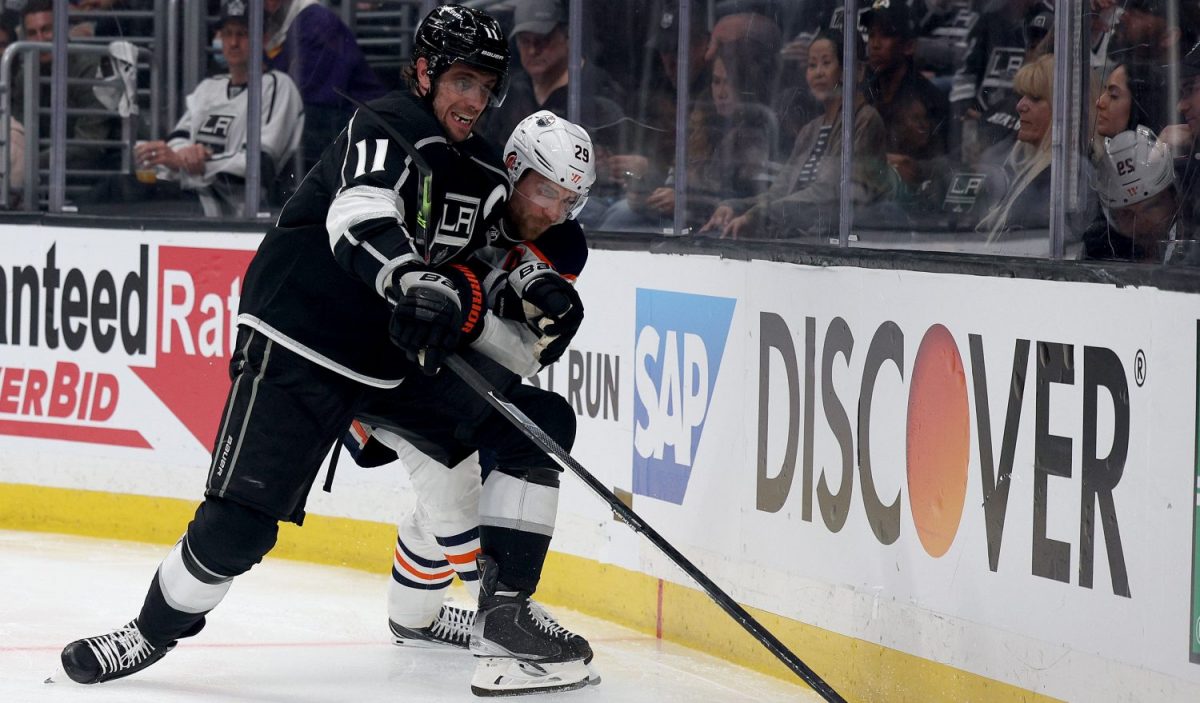 Back at it, Insiders.

Today’s skate was short overall, with some drills designed around skating and puck movement and not a ton more beyond some targeted power-play work. We didn’t get a good sense of line rushes today, with the players separated more evenly by jersey color and less so in groups of three.

Here’s how the team aligned today –

Following consecutive six-goal defeats, seeing some personnel changes for the Kings would not surprising headed into tomorrow. Today’s groupings don’t necessarily give us an indication one way or the other, but what we’ve seen a lot this season when it comes to line adjustments is keeping pairs of players together and swapping out the third man. It’s been, typically, how things have gone, so were the Kings to make adjustments in advance of tomorrow, that’s been the historical trend, as opposed to a full-blown switch.

Regarding Carl Grundstrom, who missed yesterday’s game with injury, he practiced today as noted above and “there’s a chance” he could be available for the Kings tomorrow, per Todd McLellan. Viktor Arvidsson was all but ruled out for Game 4 earlier today and did not practice with the group. McLellan prefaced both assessments by saying that he hadn’t spoken with the trainers yet, so to take what he said with that information in mind. Certainly not expecting 33 in the lineup, and we’ll see what tomorrow brings for 91.

Where To Improve
“You do have to give the other team credit, because when they put you in a position where you get away from your game, they’re doing a good job, but we’ve also got to gather our thoughts and our wits about us. We needed seven goals in Edmonton and we needed nine last night, can anybody remember the last time the LA Kings put seven up, let alone nine? That’s not our number. I thought the game in the first, 2-0, kind of a kick you know where because I thought we played a pretty strong first, but we can’t get away from it. As soon as you open up, start chasing goals three, four and five they get goals six, seven and eight, so we have to manage the game better and we talked about that today. I believe that we can do it.”

That was Todd McLellan when asked about the improvements to be made and where the Kings go from here.

In his short press availability following Game 3, one of the phrases that McLellan used was that the Kings played Edmonton’s game, not their own. Today, he expanded, giving his thoughts by first crediting the opposition for forcing the game in that direction, but by then putting the onus back on his group. More likely than not, the Kings are not going to win a 7-6 game in the playoffs, but you only have to score seven if you give up six.

The Kings scored seven goals exactly zero times this season. They scored six goals just four times, and that would have at best forced overtime in Game 2 and still fallen multiple goals short in Game 3. We’ve watched this team play for 85 games now and we know that’s not LA Kings hockey.

That’s what needs to change beginning with Game 4, and it’s what the Kings discussed after today’s practice.

Kopitar – It’s about going out tomorrow and playing the game we know how to play. It’s paying attention to details, being solid defensively, checking better and going from there.

Lizotte – I think we have to stick to our identity. The last two games have drifted away from that and it shows, they have some great players who can expose when we’re not playing to our identity. I think it’s important for us to get back to how we play and stick to our system, what we’ve done all season.

The Kings are built to play and win tight-checking, one-goal games. They’re not built to win a horse race or a track meet, cheating for offense to out chance their opposition. Getting back to the basics of what has made the Kings successful, and what made them successful in Game 1, is the focal point from today’s practice.

Mental vs. Physical
There are two sides to improvements – physical and mental.

At this point in the season, there’s very little that a team can do physically to change anything, especially to change anything by tomorrow. You can’t learn a new system, you have the players that you have and unless there’s a massive change in the status of Viktor Arvidsson over the next 24 hours, that’s not changing for Game 4.

From there, it’s about mental improvements, which were the focus this morning after practice.

Todd McLellan alluded to similar thoughts as he addressed the media earlier today.

The Kings have built out a structure and a gameplan dating all the way back to September. As a 99-point team in the regular season, we’ve seen what happens when that gameplan works. We’ve also seen what happens when it doesn’t, as it hasn’t over the last two games here in the postseason. It’s easier said than done to simply just execute as intended, but it speaks to the larger notion that Kopitar discussed, of these changes being mental as opposed to physical.

There’s a way to play the game, and off of consecutive six-goal defeats, it’s about the mental fortitude to play Kings hockey in Game 4.

“It depends how much is between the ears,” McLellan said. “I can’t answer if there’s a lot to fix, because we have spent a long time building what we know, and now when we need it, we have to rely on it and we haven’t been doing that.”

Speaking with Alex Edler and Blake Lizotte over the last 24 hours, both players talked about the importance of focusing on this series as 2-1, with the last two games as 0-2 as opposed to 14-2. The Kings could be in this position after a pair of one-goal losses, but they’re here after a pair of six-goal losses.

In that regard, it doesn’t much matter.

For Lizotte, his mental preparation stems from controlling the things that he can control. When I worked in the ECHL, our coach had a motto – there’s two things you can control every time you come to the rink, your effort and your attitude. Lizotte gave his version of that quote today.

“This is what you live for, you play 82 games, you spend all summer training and let’s not hold it in now or be mentally loose. I think it’s important to control the things you can control and that’s part of preparation. Showing up ready to play and your effort level. You can’t always control the score, but you can control your effort level and for me, that’s something I pride myself on. As long as you’re giving your full effort and bringing mental sharpness to the game, that’s all you can do.”

OHL Playoff Update
To take a slight look down the road, a pair of Kings forward prospects – Francesco Pinelli and Martin Chromiak – each advanced to the second round of the OHL Playoffs. Pinelli and the Kitchener Rangers won their first-round series in seven games over the London Knights, while Chromiak and the Kingston Frontenacs won their first-round series in six games over the Oshawa Generals.

Pinelli led his team in scoring during the first round, as he amassed eight points (3-5-8) from the seven games played. Chromiak was a point-per-game player in the first round with six points (1-5-6) and he opened the second round with a goal in a 6-4 Game 1 loss. Chromiak and Kingston trail their best-of-seven series a game to none against North Bay, while Pinelli and Kitchener kick off their second-round series this evening against Windsor.

Full series schedules for both players are available HERE.

Lastly, I joined the All The Kings Men podcast today to make some sense of Game 3 with a look ahead to Game 4. Listen in below.

That’s a wrap for today, Insiders. Game preview to follow in the morning, as the Kings look to even the series at two. A victory tomorrow would guarantee Game 6 at home on Wednesday, while a loss would put the Kings up against elimination on Monday in Edmonton. Reactions from tomorrow will be posted here as they happen.