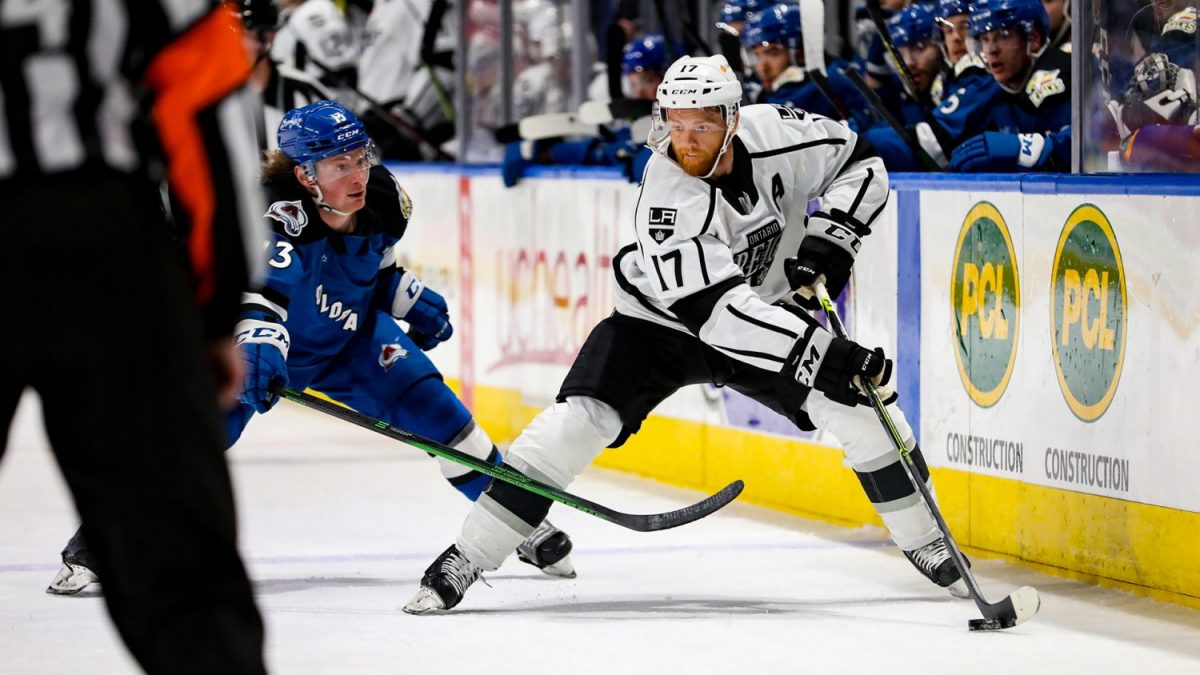 Insiders, the Ontario Reign are on to round two of this year’s Calder Cup Playoffs after a two-game sweep of rival San Diego earlier this week! The Reign will now go up against the Colorado Eagles, the AHL affiliate of the Colorado Avalanche, in a best-of-5 Pacific Division Semifinal series.

After Colorado defeated the Henderson Silver Knights on Friday night to advance, the teams officially announced dates and times for the next series, with Game 1 scheduled for Wednesday night, May 11 in Colorado.

From the Reign’s press release:

Fans can secure their tickets to the postseason now by purchasing a 10-ticket Flex Plan, which allows the purchaser to choose the dates they can attend. Single game tickets for Games 3 and 4 at Toyota Arena are also on sale now through axs.com and ontarioreign.com.

While they will begin in Colorado, Ontario still has the benefit of home ice advantage with the final three games of the series to be played at Toyota Arena. The Reign finished as the No. 2 seed in the Pacific Division with 91 points during the regular season, while the Eagles claimed third place with 85 points.

Colorado gave the Reign trouble at times during the regular season, winning four of the six games between the two teams. Ontario claimed the first meeting in November, but the other five contests were all played in April and the Eagles were at their best, sweeping the Reign in Ontario April 1-2 before taking two of three at the Budweiser Events Center between April 20-23. As was the case against all their opponents, the Reign’s power play was extremely effective in the season series against Colorado, scoring 10 times in 23 opportunities for a rate of 43.5%.

All-time, the two teams only have one prior meeting in the postseason, and it came a year ago in the Pacific Division’s shortened playoffs. The winner-take-all game went to the Eagles by a 5-4 score in overtime, with defenseman Justin Barron scoring the deciding strike at 9:00 of the extra session. There are some returning players for both sides, with Akil Thomas and Martin Frk, who both scored in the game, eager for revenge, as well as Samuel Fagemo, Tyler Madden, captain Brett Sutter and goaltender Matt Villalta. But the main difference is that the AHL’s reigning MVP, TJ Tynan, has switched teams. Tynan posted a goal and an assist in last year’s playoff game against the Reign for the Eagles, but now he’ll be helping to lead Ontario and is coming off an overtime-winning goal Thursday night to cap off the team’s series win over the Gulls.

After scoring the series-clinching goal, Tynan said the team didn’t have their A-game, but it didn’t matter that the win wasn’t pretty.

“We got the win and that’s all that matters,” Tynan said. “I’m really happy for this group. We’ve got a long way to go but it’s a good first step. It’s fun to win those important games. The most important games are in playoffs and we finally got to experience that. Last night was fun, tonight was fun, so let’s keep it rolling.”

The recent three-game series in late April is still fresh in everyone’s mind in the Reign locker room, and both players and coaches are familiar with what to expect when they make it to the Rocky Mountains. Ontario Assistant Coach Chris Hajt said he and his staff are excited to play the Eagles and he’s expecting a good series.

“They’re a real good team,” Hajt said of Colorado. “Obviously Henderson gave them a battle which isn’t surprising either because they had a very good season as well. Colorado is fast and well coached with good special teams. They play well 5-on-5 so it will be a real good matchup. We were there not too long ago so we’ll head back there to start and then look forward to coming home.”

Forward Jacob Doty, who has roots in the Denver area with family and friends close by, also shared his enthusiasm for the matchup and the upcoming series.

“We’re all excited. We knew there was a good chance we were going to get these guys and we know it’s going to be a long, hard-fought series,” Doty said.

As for the team’s recent experience in Loveland, Doty wasn’t shy about what the change in altitude can mean for the visiting team inside the Eagles’ building.

“I think maybe especially for the younger guys, to get a taste of a good building and the altitude a little bit, whether you want to admit it or not, the altitude’s a real thing there,” Doty explained. “It’s a small building that gets pretty loud and wild so for us to taste that a few weeks ago was nice, we know what to expect heading in there and hopefully we can come out of there with a couple wins.”

But first thing’s first, and the Reign will need to focus on a very tough opponent in the Eagles, who were second in the AHL with an average of 3.59 goals per game and first in the league with 34.6 shots on goal per contest.

Defender Christian Wolanin, who plays an important role on the team’s blue line said that at this time of the year you want to be at your best going up against the other top clubs in the division.

“Handling business with San Diego was first and foremost and then after that watching the Colorado series and seeing if Henderson was going to force them to three, then finding out that we play them, I think it’s only right,” Wolanin said. “I think [Colorado] is definitely a top team in this division along with ourselves, so it’s going to be a great series. It’s a tough barn there, a great environment to play in even in the regular season at the end of the year, so for playoffs I’d imagine it’s going to be going pretty good but it’s exciting to me, it’s the best time of the year and in my opinion I think it’s only right you play the best teams.”

There’s four days between now and the series opener on Wednesday for the Reign to prepare for the upcoming matchup with the Eagles, and we’ll have more coverage throughout the week here on LAKI!