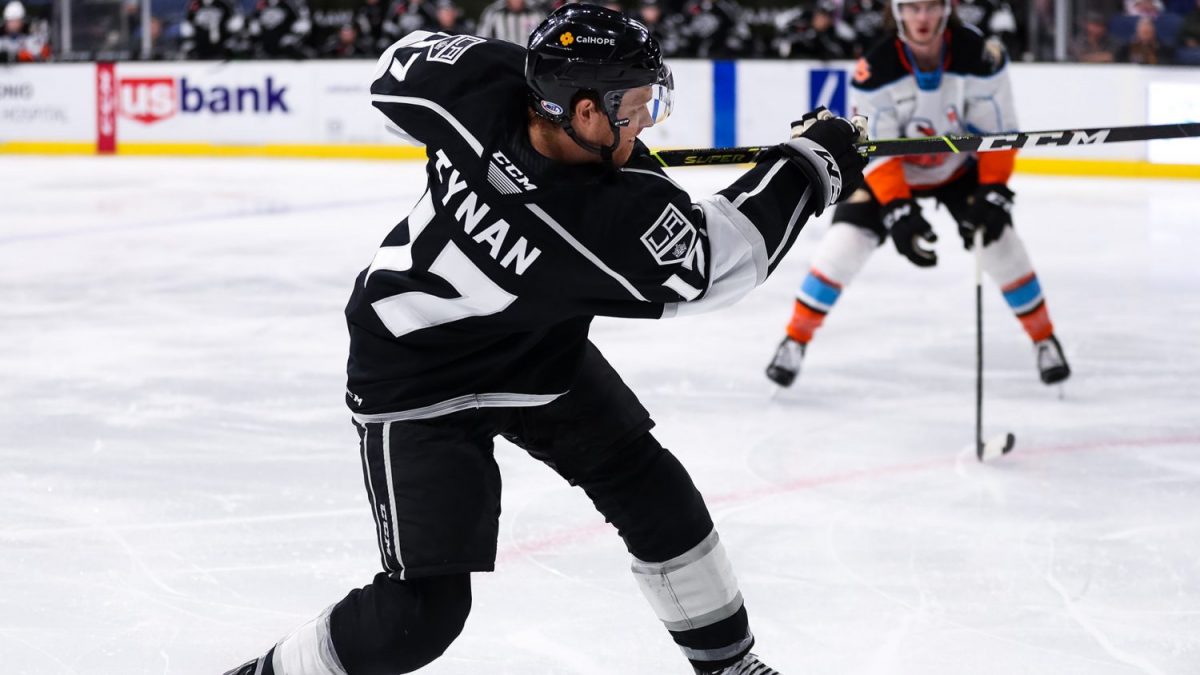 TJ Tynan’s power play goal in overtime cliched a series win for the Ontario Reign, who defeated the San Diego Gulls 3-2 to claim a sweep in the Pacific Division First Round in Game 2 at Toyota Arena on Thursday night. Reign goaltender Matthew Villalta had a big night in net, stopping 25 shots to earn his second victory of the series.

Forward Akil Thomas scored his third goal of the series in the opening period, while defender Christian Wolanin had Ontario’s second goal of the night and forward Martin Frk helped out with a pair of assists. The Reign advance to the Pacific Division Semifinals where they will either face the Colorado Eagles or the Bakersfield Condors in a best-of-5 series.

The situation in Game 2 was reversed from Game 1 on Wednesday, when San Diego took a 2-0 lead in the opening period. On Thursday, Ontario scored twice in the early going to take an initial lead.

Thomas netted the opening goal of the contest at 4:09 of the first, scoring off a pass by defender Thomas Hickey to make it 1-0. Forward Austin Wagner picked up the second assist on the play, recording his second point of the series.

Just 1:15 later, Wolanin scored with a shot from the point to extend the Ontario lead to 2-0. Forward Jaret Anderson-Dolan screened goaltender Lukas Dostal in front of the net and picked up an assist, while Frk earned the first helper on the play.

But just like the previous day, the team that was down in the first didn’t go away, and San Diego was able to even the game with two goals of their own in the second.

First, Greg Printz netted a shorthanded tally at 8:24 to put the Gulls back within a goal, and then Brent Gates Jr. evened the contest just before the period came to a close, scoring on the power play with five seconds left on the clock.

The game remained even throughout the third, despite the Reign holding a 13-5 shots on goal advantage in the stanza.

In overtime, San Diego’s Hunter Drew was called for a penalty at 2:05 of the extra session, opening the door for Tynan to net the winning goal 25 seconds later off a shot from the right circle at 2:30 with assists by Frk and defender Frederic Allard.

Ontario outshot San Diego 32-27 in the game, despite the Gulls holding a 22-15 advantage after the first 40 minutes. Both clubs tallied a power play goal and each finished 1-for-5 on the man-advantage. Dostal suffered the loss, turning aside 29 Ontario shots in the contest.

Chris Hajt
On advancing to the second round
San Diego played a desperate game. Their season was on the line and I thought they played very well. Obviously we had a good start. I really liked our start. They came back and pushed us back. The second period wasn’t our best, but we stuck with it. The last ten minutes of the third, we started getting some opportunities. We started shooting pucks and getting to the net. Dostal made some unbelievable saves near the end of the game and then our power play came through like they have all year. A great shot by Tynan, but overall, a great job by the power play to get it done. Matt [Villalta] played an excellent game. He made some great and timely saves when we needed it and we were able to get the job done. Again, it’s nice to win against a team that played very well tonight.

On gaining momentum in the third period prior to overtime
We talked about that during the intermission. We were able to get pucks behind, have a shot mentality, and get pucks to the net front. Those were things we wanted to focus on going into the game and we stuck with it. We were able to get a power play in the overtime, and we just had that shot mentality and it went in. We’ll take it for sure. We’re all happy to go to the next round and we’re looking forward to the opportunity to play whoever we’re going to play.

On the chatter on the bench before power play in overtime
There was an excitement for sure on the bench. I think of [Cameron] Gaunce on the bench during regulation. He mentioned to the power play “stay with it because you’re going to get your opportunity.” We were able to get out opportunity and they stuck with it. Those are the ebbs and flows of playoffs. You’re going to have teams that push back and not want to go home, and just overall the competitiveness of playoffs. You don’t want to get too high or get too low, and just stay the course. Ultimately we got it done.

TJ Tynan
On tonight’s series-clinching win over San Diego
It wasn’t pretty. We obviously didn’t have our A-game but in playoffs it doesn’t really matter. We got the win and that’s all that matters. I’m really happy for this group. Obviously we’ve got a long way to go but it’s a good first step.

On scoring the game-winning goal in overtime
[The Gulls] were doing a really good job all night. They were frustrating us. You’ve got to give credit to them, but we just decided we were going to throw pucks to the net, especially in overtime. I mean, why not? JAD did a great job, as always, in front of the net. I don’t think the goalie saw it at all. I saw an opening and fortunately it went in. That’s all JAD making the screen in front.

On Matthew Villalta’s performance in goal
He’s huge. He’s got to be our best player every night and he was, and he usually is. I’ve talked about Matty before. He’s the best guy to play in front of. He’s awesome. Great guy and a great goalie. To see how calm he was and how smooth he was, it was fun to watch. Obviously he kept us in it and it was a big night for him.

On starting a playoff run with this group of players
Like guys have said, we’ve kind of been locked into this spot for a while, so it’s a big first step for us and it’s fun to win those important games. The most important games are in playoffs and we finally got to experience that. Last night was fun, tonight was fun, so let’s keep it rolling.

Matt Villalta
On securing the series win over San Diego
It feels really good. It’s obviously really exciting for our group in there. It was a really hard-fought battle tonight. San Diego came out, probably knowing that it could be their last game of the year, so they gave it their all. Credit to Lukas Dostal there. I think he made some big saves, especially down the stretch when we were pressing there in the third period, but our group is excited for round two.

On how he felt tonight as opposed to last night
[Last night] was my first real playoff experience and I definitely had butterflies. I was a little anxious and very excited. I just felt like I was really into it. I feel like as the game went on last night I calmed down a little bit and tried to do my breathing stuff that I like to do. Then tonight, I knew what to expect. It made it a fun game to play in and I just kept trying to make the next save.

On playing behind this year’s Reign team
It’s amazing. It’s pretty easy to get caught up just watching them and what they do. Obviously we have a lot of good players on the front end and back end. Credit to them. They can definitely put the puck in the net when we need one and it’s a pleasure just coming to the rink every day. It’s super fun and a great group to be around. We’re all like a family now. We definitely have a lot of fun and it’s a treat just to come in every day, be a group together, and get wins.