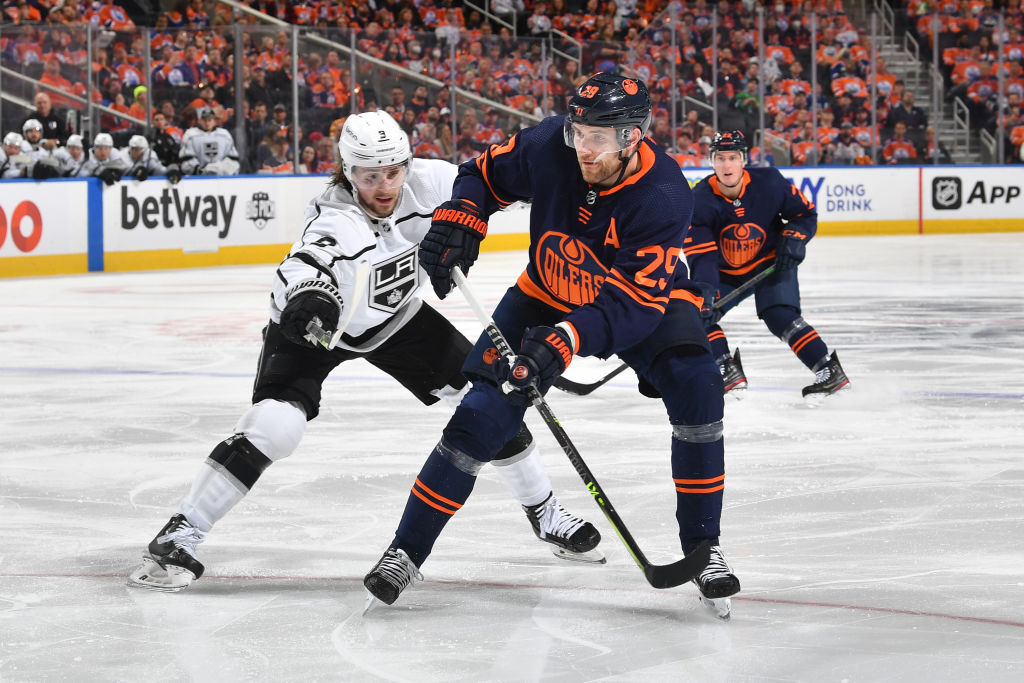 TONIGHT’S MATCHUP: It’s Game 2 of the postseason, Insiders. The Kings are coming off of a 4-3 victory in Game 1 here in Edmonton, with the opportunity to play again here tonight before the series shifts back to Los Angeles on Friday.

HEAD-TO-HEAD: The Kings were led by the line of Trevor Moore, Phillip Danault and Alex Iafallo in Game 1, as the trio combined for seven points in the victory. Moore led the way with three points, including the first two assists of his postseason career, while Iafallo and Danault each had a goal and two helpers.

KINGS VITALS: It’s a brand new test this evening for the Kings, as they prepare for Game 2 against the Oilers. With a 1-0 lead in hand, it’s another firm test in tonight’s game, with the need to take each game as it comes in the postseason.

As has been his process for most of the season, goaltender Jonathan Quick was not on the ice today and is tonight’s projected starter for Game 2 in Edmonton. Quick made 36 saves on 39 shots against in Game 1, as he earned his first playoff victory since 2016. Quick has now made each of the last 86 postseason starts by a Kings netminder. All-time, Quick is 46-39 in postseason play, to go along with a .922 save percentage and a 2.24 goals-against average.

Today’s morning skate gives no indication of any potential lineup changes, with most of the group on the ice, though a few players took the option, as they have at times throughout the season.

For reference, here’s how the team lined up in Game 1, with no apparent signs today pointing to that group changing tonight in Game 2 –

OILERS VITALS: Edmonton has not lost back-to-back games consistently this year, with just two sets of consecutive losses since March 9. The Oilers have lost just six of 25 games in total during that stretch of regular-season contests.

Per Tony Brar of Oilers TV, here’s how the Oilers are expected to line up this evening in Game 2 –

Archibald in. Russell out.

This marks a change from Game 1 to Game 2, with Edmonton appearing to move from an 11-7 alignment to a 12-6 alignment. Brar noted that forward Josh Archibald looks likely to check-in up front, with defenseman Kris Russell on late for extra work. Otherwise, Edmonton appears set to go with the same group as Game 1.

Importance of Wingers In Matchups
A lot has been made in this series about the matchups at the center position during this series, specifically the dynamic, offensive duo of Connor McDavid and Leon Draisaitl against the two-way pair of Anze Kopitar and Phillip Danault.

That matchup was certainly evident in Game 1, with those four very close in total time on ice (Kopitar and McDavid were separated by 8 seconds, Danault and Draisaitl were separated by 11 seconds). The side-plot to that, however, is the group of wingers who play alongside those centers and are tasked with logging those minutes and matchups as well. Kopitar, for example, played 25:41 in Game 1, but his right-hand man, Adrian Kempe, wasn’t all that far behind at 24:55. Having those wingers who can also handle those situations is a lesser-discussed element of the series, but still an important one.

“Yeah, both teams have wingers that are very effective in the game,” Todd McLellan said this morning. “A lot is made about their two centermen and our two and it’s a natural storyline, if I had your job I’d be writing about it too because they’re four, outstanding players. But, there are also some really good wingers on those lines who play a significant role in the outcome of the game and the outcome of the match. We’re fortunate to have 5, 6 of them that we can put up there and we can do the same.”

Speaking with Kempe and forward Trevor Moore, they’re both players who embrace the challenge of those matchups. In Game 1, Kempe’s most common forward faced was McDavid. Moore’s was Zach Hyman, with Draisaitl not far behind.

A common theme for sure in the first go of things on Monday.

Kempe – Yeah, it’s obviously tough, we were out there for 25 minutes last game and it’s a tough challenge. Playing against those two guys out there pretty much every shift, it’s going to be a good challenge, but we addressed that before the game and went out there and did a pretty solid job against them at 5-on-5. PK and special teams are going to be huge, we know how good they are in that situation, but 5-on-5 we did a good job of that.”

Moore – Yeah, I think that’s a huge challenge, but a huge opportunity at the same time. Phil has done it, like he did it all of last year, playing against some of the top players in the league. Knowing that I have that confidence in him, and I’m going to hold my own weight and that [our line] will do the same.

Speaking with Kempe this morning, his minutes have certainly saw an uptick in Game 1 from what he’s handled during the regular season.

His ability to learn from Anze Kopitar in that area has been huge for him, as a linemate who has been managing those minutes all season long, and throughout several playoff runs.

“I feel like I’ve been trying to learn from him all year when it comes to things like that,” Kempe said. “Earlier, maybe when you aren’t used to it, you [were gassed] in the first or second period and didn’t have that energy going into the third. Now, I feel like with the experience I have, I can manage it and I know that I’m going to be up at those minutes and what kind of pace and workload you need to have throughout the game.”

Defending As A Unit
Perhaps the biggest difference between the forwards and defensemen from a Kings point of view does relate to those matchups.

Each defenseman the Kings dressed in Game 1 played at least seven minutes at 5-on-5 against at least one of McDavid and Draisaitl, meaning that each had several shifts and several important moments against those individuals. When you factor in special teams, no one defenseman played fewer than 10 minutes against at least one of those two individuals, with those totals not accounting for times when both forwards were on the ice together, skewing the data somewhat.

Regardless, it speaks to the collective of the group in those situations, understanding that matchups on the road are challenging and that each of the six on the backend will find themselves in a situation like that in this series.

“Obviously in this series, they have their two big guns who are on the ice over half the game usually,” Mikey Anderson said this morning. “On the road, it’s tough to get matchups and we’ve had guys out for extended periods of time and guys step in. Nothing has really changed from that, everyone is chipping in, everyone has a role and responsibilities and everyone is buying in right now.”

Anderson was one of four blueliners for the Kings to make his playoff debut on Monday, with his partner Sean Durzi also in that boat.

Speaking yesterday with Durzi, he, like Anderson, is well aware of the offensive qualities that the Oilers have at the forward position. He doubled down on the things that the Kings have done well all season on the backend, which is coming together as a group, emphasizing communication and playing with intensity. As a group of six, more so than pairs of two, that’s an important sticking point for the Kings.

“Against a team with this offensive caliber, you have to be sharp,” Durzi said. “Quickie all night was incredible for us, but it’s about sticking together and communicating, things that you need in the playoffs. The intensity, the communication, I thought we brought it in all of those scenarios. I do think there’s a lot we can improve on and that’s what we’re focused on for Game 2.”

With that offensive firepower going nowhere soon, each game is another task ahead for these defensemen.

With the ebbs and flows of a postseason series, the Kings know that each game is different, with different challenges to overcome. Something that Anderson and the group is looking forward to taking on tonight.

“I haven’t been through that yet, so I think tonight will be another step for all of our young guys to learn and figure out how to go about it,” he said. “We have that great leadership and we’re worried about Game 2, Game 1 is done with. Take away the things that we want to do again, but tonight is a completely different animal than it was the other night.”

A New Level of Postseason
It’s not really all that important of a storyline, but I really found this quote from Mikey Anderson interesting about the differences between playing in an NCAA National Championship game to the Stanley Cup Playoffs.

Anderson won two national championships at Minnesota Duluth while in college, and he’s played in a World Juniors gold-medal game while captaining Team USA. Here in the NHL, though, it’s a completely different animal, with Anderson explaining why below –

“The nerves are similar, but it’s completely different. College is a neutral site, so you’re not having your whole fanbase there, or the other team’s, it’s kind of a mix of both. Being in it the other night, you have all of their fans, the energy is a lot louder, buildings are nonstop making noise, which you don’t get as much in college. The whole series factor comes into play too, in college you only have to win one, here you have to win four, so it’s keeping your foot on the pedal and trying to do it again.”

A cool perspective from a player who has a pretty extensive resume of meaningful games played by the age of 22.

Kings and Oilers tonight, 7 PM Pacific puck drop, before the series shifts back to Los Angeles with Game 3 on Friday at Crypto.com Arena. Another T̶w̶o̶ ̶b̶i̶g̶ ̶p̶o̶i̶n̶t̶s̶ one big win on the line tonight in Edmonton! 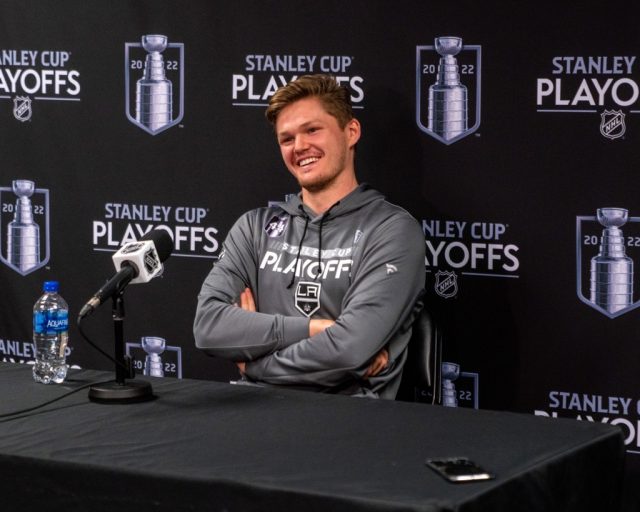 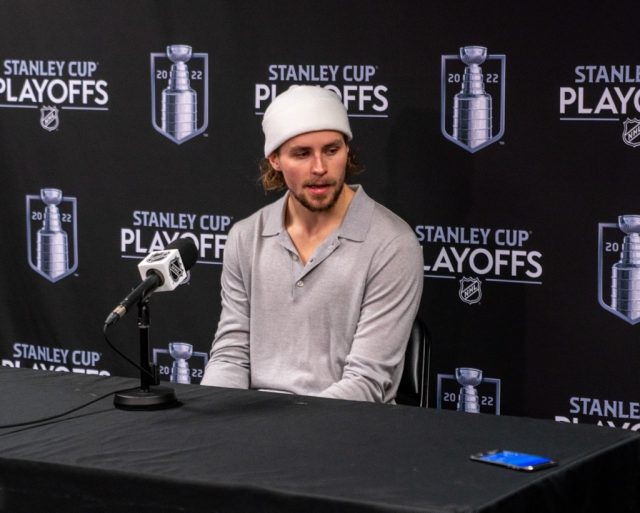 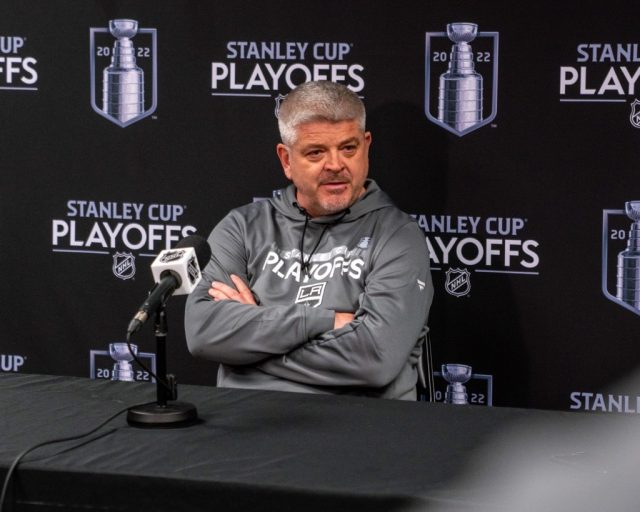