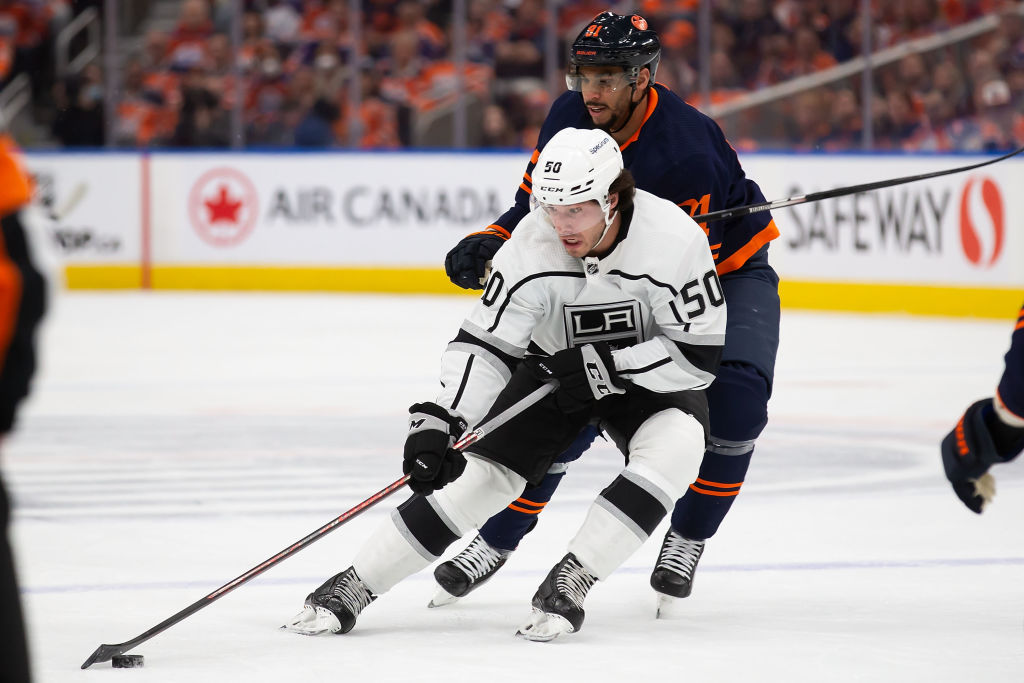 It’s the middle day in Edmonton with the Kings back in action this afternoon at Rogers Place. At this time of the year, practices are as much about minute management as it is about working on things for the game. Anze Kopitar played over 25 minutes last night. Adrian Kempe was three seconds shy of that mark while Phillip Danault was just under 23. Practices for those heavier minute players will be different than for say those who didn’t play in Game 1, or those who played fewer minutes.

No formal line rushes from yesterday so for reference, here’s how the Kings lined up this morning for practice today –

Forward Viktor Arvidsson missed last night’s game and was not on the ice this afternoon.

“We’ll see how he’s feeling tomorrow morning,” Todd McLellan said today. “Obviously not a good sign if he’s not on the ice today, but that doesn’t mean he won’t be available for us.”

It’s an ‘evaluate him the next day’ situation. We’ll see how he progresses throughout this series. Other than that, no apparent changes in lines today, and that’s to be expected coming off of a win. The top six would expect no changes and the bottom six got a big goal yesterday so with that in mind, you’d think that Arvidsson’s status might be the decided factor in tomorrow’s lineup, as opposed to a personnel switch. But, it’s the playoffs, so we’ll see how it goes.

Playoff Quick
The last time the Kings had someone start a playoff game that was not Jonathan Quick was 2002. The Cat, Felix Potvin, was between the pipes then, but for the last 86 games played it’s been one man – Quick – in net.

Quick’s close to the regular season was outstanding, winning each of his final five starts, and his performance yesterday in Game 1 was exactly what the Kings needed. There’s a lot of external chatter about how Quick has changed, but in the words of his head coach, he’s always been in that mindset, it’s just noticed and talked about more now that the calendar has flipped from 2021 to 2022.

“He’s always in that mode, it’s just the calendar’s turned and he’s done this before, he’s been there and he knows what and how to do it,” McLellan said. “Maybe it’s cranked up a little bit more, but he’s like that at the beginning of training camp too.”

His teammates have noticed the same thing.

Sean Durzi was asked today about Quick’s play ramping up or elevating over the last few weeks, talking about how dialed in the goaltender has been. While to those of us watching, it has been a sizeable shift in that span, for those in the room, they haven’t really noticed a difference. Just Quick being Quick.

“A lot of people say it’s been 2, 3, 4 weeks, but I’ve noticed it all year,” Durzi said. “It’s just what he brings, he’s Jonathan Quick. He’s one of the best all-time, it’s just him being himself, what he brings to the table every single night. It doesn’t matter what game it is, he’s going to be in there locked in, dialed in and being his best. His best is Jonathan Quick and I thought he brought it yesterday night.”

McLellan pointed to Quick when asked last night about managing momentum and handing those ups and downs of postseason play. During the second period especially, the Kings had several of those swings, several opportunities when the Kings could have seen things go worse, but didn’t.

Quick had several of those game-impacting saves yesterday at key moments in the game, and several key covers for whistles, which may seem like a small facet of the game, but it’s a noticeable and impactful one. Quick was able to get the stoppages the Kings needed, at the right times in the game.

“[It was huge],” McLellan said. “I think we had four faceoffs in the last minute and a half in the zone, that allowed us to get fresh players on. They kept their six guys on the ice, we rotated in and out and having the fresh legs, fresh minds I think helped us in that moment.”

So far, so good on that front.

Sean Durzi got himself on the scoresheet with an assist on the game-winning goal as one of those eight players in the first taste of postseason action. Durzi logged just shy of 19 minutes last night, third-most amongst team defensemen, as he played postseason hockey for the first time, living out what he’s been dreaming about and looking forward to for some time.

“It’s the Stanley Cup Playoffs, you grow up dreaming of this moment,” he said. “Now that we’re here, you see that atmosphere pre-game, you see the hype around the game all of that stuff, it’s a lot of excitement.”

Durzi certainly acknowledged the nerves, but also talked about how once you got into the flow of the game, in some ways it was just another hockey game. In other ways it was obviously more – it’s the freaking playoffs! – but from a player standpoint, you’ve just gotta play and that’s what Durzi attempted to do.

There wasn’t necessarily one moment when everything settled down for him, but as he got going and got playing, it came together.

“I thought I settled in pretty nicely,” he said. “Once you realize it’s hockey, you’ve done it your whole life and you play. If you bring that intensity every single night, it’s just another game and I thought once I got into the game, it went pretty well and I went from there.”

The first-year defenseman also complimented the team’s leadership for their help with himself and the other younger players in the lineup. He recalled Dustin Brown giving him a tap while on the bench early in the game, indicating it’s time to go. He felt locked in from that point on. His comments echoed something that Todd McLellan shared after last night’s win regarding the leadership team, and their importance in the process.

For players like Durzi and the other first-year guys, it’s an experience here at this time of the year, and an important experience from a Kings point of view.

“Leadership was real important, opportunity to play in these games is exactly what we wanted,” McLellan said. “We’ve talked about this ad nauseum already, about gaining experience as we go for that up and coming group. They’re getting it. Maybe they don’t get 15 minutes a night, but they’re involved in everything that happens on the bench, on the ice, in the game. That’s valuable.”

Penalties & “Crackdown”
If we’re focusing on an area for improvement from the Game 1 win, it’s got to be penalties.

The Kings took four penalties and conceded two power-play goals. Asked if the Kings can handle taking four penalties a night in this series, McLellan said that they can (they showed they could last night) but certainly don’t want to. Overall, penalties are an area of focus for the group to clean up heading into game two. With the standard of the calls established, McLellan knows the Kings need to be aware.

“I didn’t think we managed the game well in certain situations, we gave up a power play for too many men on the ice and we took too many penalties,” he said. “The crackdown is evident, after watching Toronto play, then us play. and going back and reviewing the games, there’s a lot of penalties that are being called right now. We’re aware, but we’re going to have to be more aware.”

When asked on the standard of the officiating, McLellan believes that the Kings learned things from watching the Toronto/Tampa Bay game earlier in the day, understanding that things could be called a certain way. It’s only been three periods of playoff hockey, so we don’t know exactly how things will progress, but seeing four penalties a side indicates that we might not see what is frequently discussed, and that’s swallowing the whistle entirely in playoff action.

“I think that they’re establishing that the standard is not going to change. Is it tighter, or are they more focused, I don’t know but we’ve only played three periods. Watching what’s going on in some of the other series, and that’s a real good cue for us as coaches is to pay attention, look around and see some of the calls that are being made and how they’re being made. I didn’t think they did a poor job last night at all, I don’t know what Woody thought, but they set the standard and they stuck to it.”

We’ll have a deeper look at Alex Iafallo coming up between now and Game 2, Insiders, detailing his last-minute bump to the second line and how he’s fit into the larger narrative that’s surrounded the Kings all season, with how well they’ve adopted a “next person up” approach. A huge storyline from the Game 1 victory, and with Viktor Arvidsson’s status unknown for Game 2, something to continue to watch for as we progress through the series.

As always Insiders, thank you for reading!