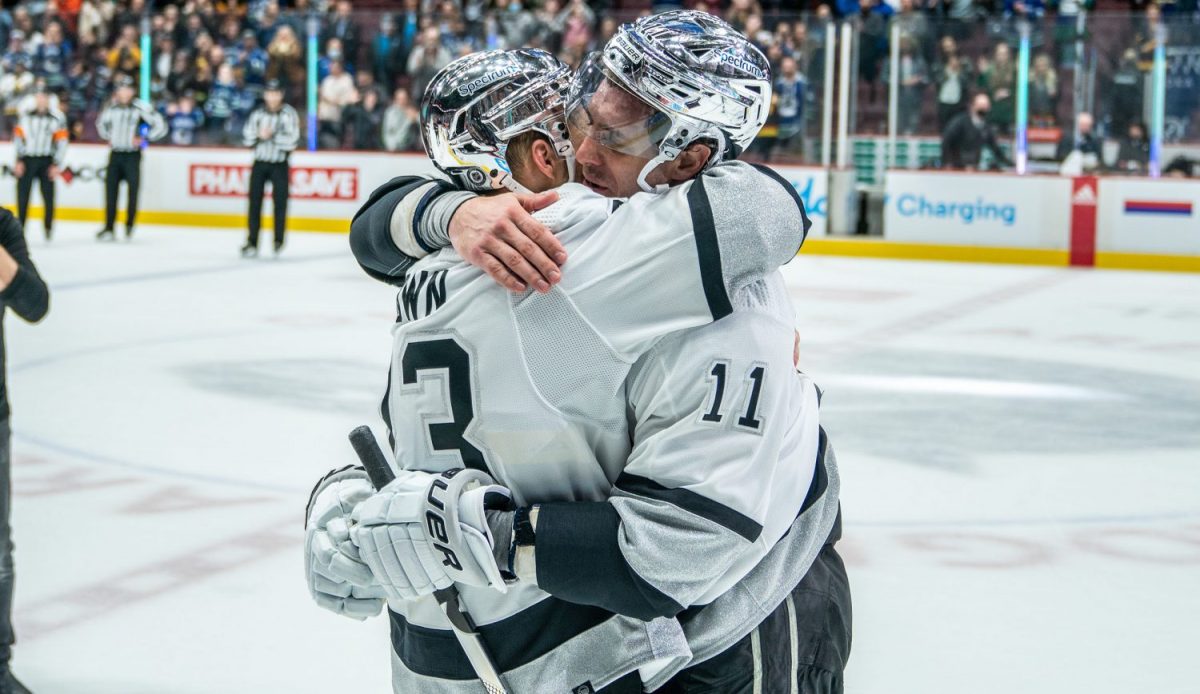 In the final regular-season game of Dustin Brown’s NHL career, and the last of the 2021-22 regular season for the entire team, the LA Kings picked up a point in a 3-2 overtime defeat in Vancouver.

Forwards Gabe Vilardi and Adrian Kempe scored for the Kings, while Cal Petersen returned to the net for his first start in seven games with 26 saves in the overtime defeat. Brown finished the evening with three shots on goal and a +1 rating in 18:26 played.

After a scoreless opening period, and more than 15 minutes of scoreless hockey in the middle stanza, the Kings got on the board late in the second period. Off of a cycle in the offensive zone, Vilardi took the puck from low to high, curled himself into the right-hand circle and snapped a shot through traffic and past Vancouver netminder Spence Martin for his second goal in as many games.

Just over a minute from the second intermission, the Kings scored again to take a 2-0 lead through 40 minutes. In a 1-on-1 situation, Kempe took the puck down the left side and fired a shot past Martin off the rush for his 35th goal of the season. Kempe became the first King to score 35 goals since Anze Kopitar in the 2017-18 season.

Vancouver came back in the third period with two goals to push the game into overtime. First, Brock Boeser buried a one-timer on the power play, after an extended 5-on-3 sequence, to put the hosts on the board. Then, with less than six minutes to play in regulation, forward Alex Chiasson tied the game at two, as he got on the end of his own rebound in front to slot past Kings netminder Cal Petersen for his 13th goal of the season.

After the two teams went the distance tied at two, the Canucks eventually earned the extra point in overtime, as Boeser buried after a scramble in front for his second goal of the evening.

Hear from Kopitar and Head Coach Todd McLellan after the win.

On having a day to celebrate Dustin Brown
A day is not enough. It was rushed, he had made his mind up I think a while ago, but didn’t want to disrupt our run to the potential playoffs and once we were in, it was game day, so everything was rushed a little bit. He deserves more than a day and he’ll get more than a day. An unreal human being and not just the hockey part, there’s so much more to Dustin Brown than just skates, sticks, shots and Cups. Watching him behave around the rink as a father, leadership skills in the locker room, husband, all of those things are very high quality. The Kings, LA, hockey in general are all lucky to have him for as many years as he had.

On having this moment for Brown, but it not being the end of his run
It’s great. It’s out of the way now and it gives us something to rally behind and they can grab onto it. There’s a story behind teams that go on runs, there’s a motivating element to it and maybe we’ve found ours before we even start. I know the group will want to play for him and with him and we’ll see where the journey takes us.

On Brown wearing the “C” one last time for the Kings
Yeah, I think it’s appropriate, a long-serving guy who lifted the cup wearing the “C”. Tip of the hat to Anze for thinking of that, executing it and making it happen. That wasn’t management-driven or coach-driven, that just goes to show how tight those individuals are and what they mean to each other. A very honorable thing.

On the game tonight and if it felt like the team was at all “on to Edmonton”
I think the answer to that question was probably the third period, I think we had already moved on to Edmonton. We’ve talked for 15 minutes about Dustin, and we should, we should talk the whole night about him, but there was also a game that we played. We didn’t play a real good third period, back-to-back games, made sure everybody got an opportunity to experience a tight game in different situations. I really think our minds were moving forward. We did check well early in the game, the first two periods, but the third wasn’t particularly well played on our behalf, I think we have moved ahead.

On if he feels that individuals got what they needed out of the game
I haven’t checked with the trainers, so the first thing that we needed was health. Then, we needed some guys just to get games under their belt again, I’m thinking of Mikey Anderson, Lizotte coming back, Athanasiou hasn’t played a lot and they got more ice time, they got into situations that they needed to be in. While all of that was happening, some of the kids got expanded roles. Some of them penalty killed, some of them played in the last minutes of periods, took big faceoffs and that was really big for them as well.

– Forward Dustin Brown played in his 1,296th and final regular-season game this evening. Brown announced his retirement, effective after the 2022 Playoffs, earlier in the day.
– Brown wore the captain’s “C” tonight after serving as the team’s captain during the 2012 and 2014 Stanley Cup runs.
– Brown’s final regular-season game finished with three shots on goal, a +1 rating and 18:26 in total time on ice.
– Forward Adrian Kempe scored his team-leading 35th goal of the season, the first Kings player to hit 35 goals since Anze Kopitar in the 2017-18 season.
– Forward Gabe Vilardi scored for the second consecutive game his game-opening goal in the second period. Vilardi has four points (2-2-4) over the last two games.
– The Kings finished the season with 99 points, falling one point shy of reaching triple digits for the sixth time in franchise history.

The LA Kings are not scheduled to skate tomorrow, however the organization will hold a press conference in honor of Brown’s retirement. The event is slated to begin at 11:30 AM and full coverage will be provided here on LAKI. The team will return to the ice for practice on Saturday as they prepare for their Round 1 matchup against the Edmonton Oilers.