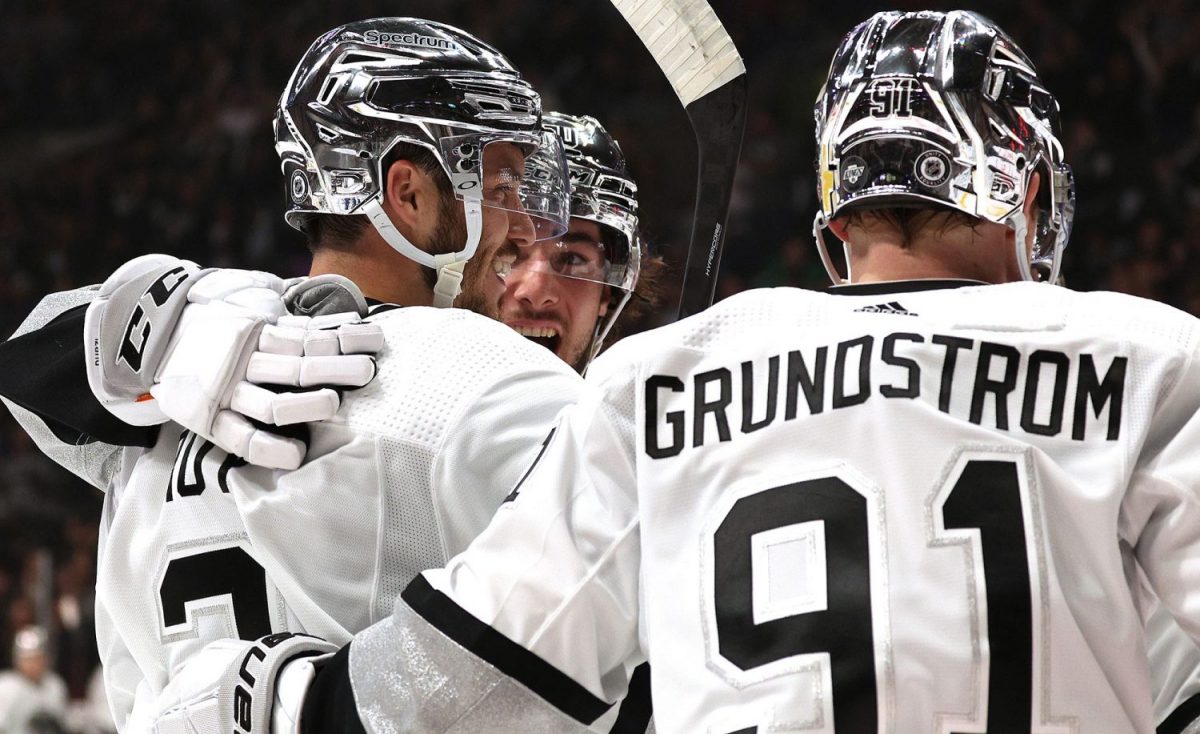 The Kings hit the ice this morning in El Segundo in advance of today’s trip to Seattle. The Kings depart Los Angeles one point shy of a postseason berth, with the possibility of clinching the playoffs without playing tonight, which could come via a Dallas win in any fashion over Vegas.

Todd McLellan has said that he knows what tomorrow’s lineup looks like at this time. Should tomorrow’s result impact the meaning of that game for the Kings, they could adjust accordingly, but nothing until that point.

Defensemen – By Committee
“Trust our systems, trust each other and do the job.”

A good way of putting it simply, courtesy of Sean Durzi, who was asked about the group of defensemen this season without Drew Doughty and how they’ve banded together as one at this time of the year.

Todd McLellan said yesterday that he hasn’t really experienced a situation like this, as he’s usually had a defined and clear-cut number one defenseman, number two defenseman, etc. He noted that Alex Edler certainly was that player in his prime and obviously should the Kings have had Drew Doughty available, we wouldn’t be having this conversation or writing this bulletpoint in an article. But here we are.

“Obviously Dewy is huge part of the team,” Durzi said. “Early on in the season, every single night, being able to watch him and learn from him was huge. I try to do things in my game now that I’ve seen him do, so it’s pretty cool to notice that. He’s still a huge part of our team now, just talking to him, having that experience, it makes it a lot easier for us.”

McLellan spoke about Edler, Matt Roy and Olli Maatta separately from the group as a whole, with the experience of those players compared to the other three in the lineup in Durzi, Jordan Spence and Jacob Moverare. The duo of Roy and Edler have combined to log a lot of the tougher minutes for the Kings as of late, with others slotting in behind.

Speaking with Durzi today, he pointed to Roy’s mentality as being something he can try to learn from and grow from. Considering himself to be a passionate player and individual, it’s easier than he would like to get too high or low on himself. He pointed to Roy as someone who does a great job of not doing that, something he’d like to pull into his own game when applicable.

“His mentality,” Durzi said. “He does amazing things on the ice and you can’t give him enough credit for the things that he does out there, but just the way he goes about his game, how even-keeled he is. He’s never too high, never too low. For a passionate player like myself, it’s pretty easy to get too high or too low on yourself, so that’s something you know you’re seeing every day in him and that’s what he’s so reliable.”

With Roy coming back into the lineup, it’s relieved a bit of the burden that was being placed on Durzi and Spence on the right side.

Edler and Roy both have experience playing against, and attempting to shut down, the top players on an opposing team. Durzi and Spence were being asked to do a lot of that with Roy injured and Edler recovering and handled it as well as you could have possibly expected. Now, the Kings are deeper on the backend, with three pairs capable of sharing the load a bit more than they did. And that’s a rallying cry for the group.

“The group all year, we’ve been resilient, whether anyone is missing or not, we’ve been resilient enough to say next man up,” Durzi noted. “I think that’s the mentality moving forward. What we have in the room, we have to believe we have everything we have to win and that’s something I think we have and the belief is going to be even stronger. That’s something we’re going to rally behind.”

Fourth Line & Impact
We’ve talked about the other three lines here over the last week, so might as well make our way to the fourth line today.

“I’ve liked their last six periods, they’ve been a factor in the games,” Todd McLellan said of the line. “They have physicality, there’s pace, there’s some size, puck movement and goals. All while being fairly responsible, their checking skills were pretty good, it’s a good look right now.”

A great display from that trio on Saturday specifically, with Arthur Kaliyev involved in all three goals, Quinton Byfield collecting two assists and Carl Grundstrom collecting one. All three had strong games, all three were noticeable, and it was noticeable how the meshed and played together as well.

CG – I think we played together, helped each other out and we played direct, which was key. All three of us are strong down low and strong with the puck, so I think that helps us because we all want to play the same way.

QB – I think Carl has a lot of skill and he works super hard, he’s always finishing hits, he’s always getting in there. Arty, he has a crazy shot and he’s always making plays. I’m just trying to read off of those two guys. Last year in Ontario, me and Arty played a lot together, so there’s definitely some chemistry there as well.

Over their past 120 minutes (in full game time) together, that line has controlled shot attempts by a 18-14 margin at even strength, but it was in the higher-danger metrics that they really stood out. Scoring chances were 11-4 in favor, while high-danger chances were 6-1. Goals for, as a three-man unit, were also +2 in the Anaheim game for that trio, with Kaliyev also impacting a third during a line change, though that play was started by the full line.

Looking specifically at Grundstrom, who we spoke with this morning, he believes that consistency has been his biggest area of improvement this season. He hasn’t been a regular in the lineup but he has impacted games when he’s played, with nine goals in mostly a fourth-line role. Grundstrom has career highs in all offensive categories, as well as incredibly consistent and above-average possession metrics (he’s between 52.68 and 53.63 in percentage of shot attempts, scoring chances and high-danger chances controlled). Good signs from #91.

“I think I’m getting more consistent this year, that’s been my biggest improvement,” Grundstrom added. “I think you learn when you play games, I’ve been here for a couple of years and I’ve learned that way. Try to play my game and help the team the way that I can do.”

The Kings prioritize playing four lines, but can only do that when all four lines are playing consistently at a level that merits the more even split. We’ve seen a lot of fluctuation over the bottom six over the last month and a half, with a rash of injuries necessitating changes, but seeing some consistency at the right time is a huge boost.

Over the last two games at the least, they’ve gotten that contribution across the board, a good sign heading into tomorrow, and hopefully some additional important games to come.

Robitaille joined the program to talk about the push for the postseason the Kings are undergoing, the larger-scale plan and vision for the organization and a few other stories along the way. Enjoy!

Stars and Golden Knights tonight, Kings and Kraken tomorrow. The Kings can watch the former, but regardless of outcome, they control their own fate tomorrow evening. A win for the Kings, or even a point, would lock in a playoff position for Los Angeles.