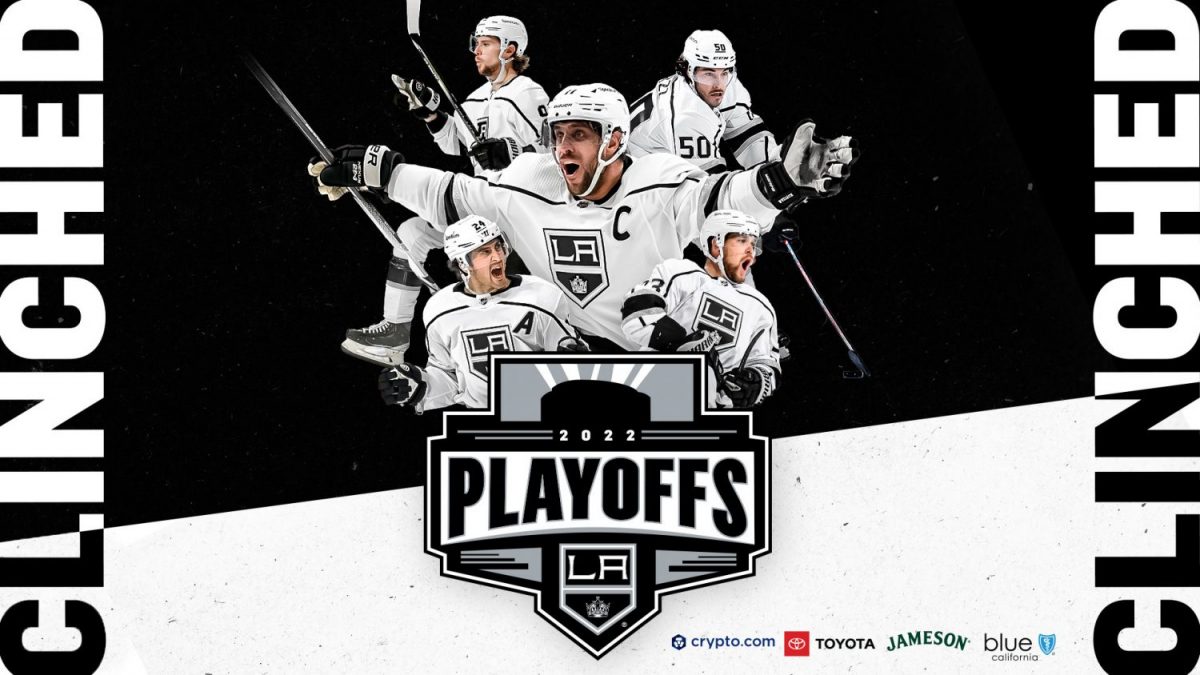 With a Dallas win over the Vegas Golden Knights, the LA Kings have officially clinched a postseason berth, returning to the Stanley Cup Playoffs for the first time since the 2017-18 season. We now know the Kings are in, with two regular-season games still to play. Here’s everything we’ve got to date on what could still happen and what’s to come regarding the 2022 Playoffs.

Seeding & Opponent
The Round 1 Matchup is set.

The Kings clinched a playoff spot this evening, courtesy of the Dallas win over Vegas and Edmonton clinched home-ice advantage in the first-round matchup, courtesy of their own victory over the Pittsburgh Penguins, despite the best efforts of Jeff Carter, who scored in defeat.

Up until this evening, the door was left open for the Kings to finish either second or third in the Pacific, with the potential of earning home-ice advantage in the first round. Though the teams could still tie on points, should the Kings win tonight and tomorrow and the Oilers lose on Thursday and Friday, Edmonton already owns the first tiebreaker, with the Kings unable to catch them in regulation wins.

Schedule
To Be Determined.

The 2022 Stanley Cup Playoffs are scheduled to begin, leaguewide, on Monday, May 2. The expectation is that teams would have two weeks, per series, which brings us to the league-mandated final date for the postseason, June 30.

Game 1 of the best-of-seven series will take place in Edmonton, as will Games 5 and 7, if necessary. The Kings are set to host Games 3 and 4 and, if necessary, Game 6, all at Crypto.com Arena. The series could begin as soon as the second, with reports on social media today suggesting the possibility of Games 1 and 2on May 2 and May 4. That would place the first game on home ice somewhere around May 6th, 7th or 8th, depending on scheduling conflicts, events, movement, etc. A full schedule is expected to be released at a later date, once seeding is confirmed between the Kings and Oilers.

Round 1 Tickets
Per The Kings –

Tickets for First Round home games at Crypto.com Arena will go on sale Thursday, April 28 at 10 AM. VIP Pre-Sales are live now and can be accessed by using your American Express Card, following LA Kings Social channels for an access passcode, or subscribing to the LA Kings VIP eNews. Season Ticket Memberships for 2022-23 are on sale now and include access to the best seats at the lowest prices, including access to all playoff games. Visit www.lakings.com/playoffs for more info and to secure tickets.

For those looking to get a jump start and some inside access, visit axs.com/lakings and use the promo code FOLLOW in the “VIP PRESALE” section of the webpage. That will give you access to Round 1 tickets.

That’s all for tonight, Insiders! We’ll get reactions from players and coaches tomorrow on finally clinching a playoff berth, with the team set to take to the ice tomorrow morning at 11:30 AM for morning skate in Seattle. Until then….the Kings are in! Enjoy it, Insiders!