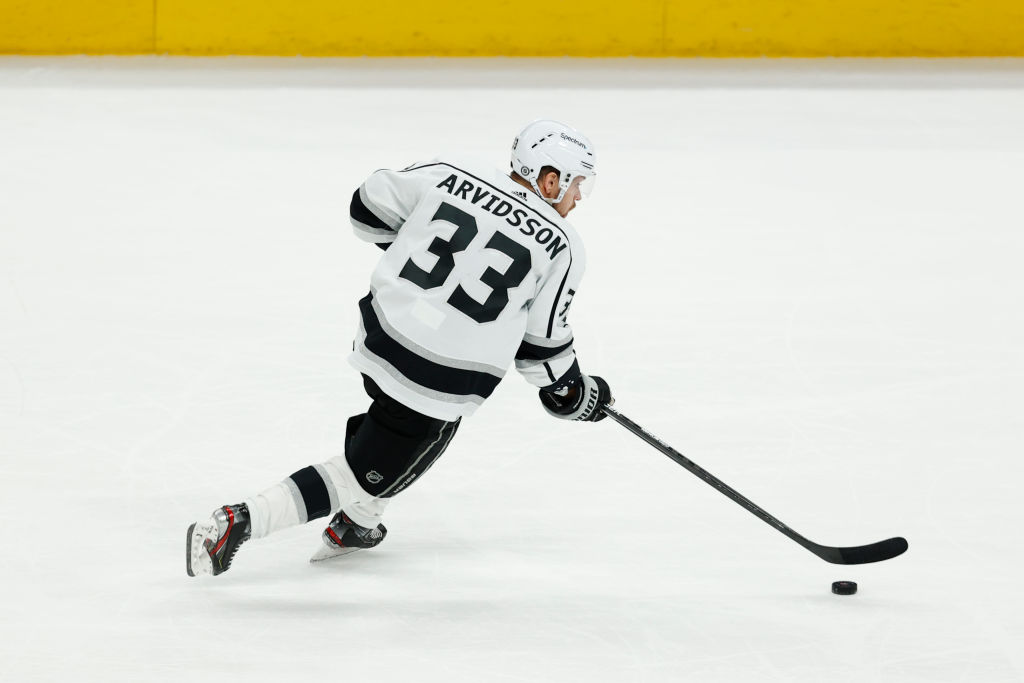 With their batteries recharged, and a fresh day behind them, the LA Kings returned to the ice today at Toyota Sports Performance Center.

Coming off of a 1-2-0 road trip, that certainly had a brighter spotlight shone on the two losses than the one victory, the Kings hit the ice today still in a playoff spot with six games remaining in the regular season. The next four of those games are in Southern California, with three in Los Angeles and one in Anaheim. Light travel, few days in between games, stage is certainly set for the group to make that one, final push towards the postseason.

Today’s practice was designed to “get the engine going again”, with a few notes specific to tomorrow’s opponent, the Columbus Blue Jackets, in addition to, as always, some special teams work.

Forward Andreas Athanasiou found himself out of a red, non-contact jersey and into a regular sweater today, his first practice back in that capacity. The Kings, as a forward unit, looked good from top to bottom in the win over Chicago on Tuesday. Not the case in the defeat in Colorado on Wednesday. With all of that information in mind, the Kings made a few changes to both their forwards and their defensemen today.

Athanasiou skated up on the top line with Anze Kopitar and Adrian Kempe, with Arthur Kaliyev slotted back into the bottom six after two games up on the top line. The newly assembled 19/46/23 line stayed intact today, with a few other changes in the bottom six, though not in a way that gives us full clarity on who might be in or out tomorrow, with four individuals on the “fourth” line.

Additionally, defenseman Mikey Anderson came out towards the end of practice for some individual work, done mostly after the majority of the team had left the ice. A good sign regardless as 44 continues to rehabilitate, though immediate expectations should be tempered.

Learn It, Flush It, Move On From It
“We can’t focus on that, we’ve got to put our energy and our focus into the next task, not the one that’s behind us.”

That was the message this morning from Todd McLellan, following Wednesday’s lopsided defeat in Colorado.

McLellan indicated that the coaches reviewed and rewatched the entire game, but they didn’t show the full game to the players. He pointed out that there was no point in the team to “wallow in it” and that the focus from this point out is straight ahead. That approach would have been the same regardless of if they practiced yesterday, or didn’t for two days.

“If we would have practiced yesterday, if there was a scheduled practice and we weren’t out of gas, I think that we still probably would have approached this the same way,” he said. “We can show them a bunch of clips of what they were doing wrong, but it was wrong from minute one to minute 60. Players are smart, they know that. The last thing we need is our lips hanging on the ground, carrying it around from day-to-day, we’ve got to move on.”

Players who have been in this situation before understand that mindset.

Each of the team’s three veteran offseason acquisitions – Phillip Danault, Viktor Arvidsson and Alex Edler – have been through this type of a stretch run. Speaking with Arvidsson today, he was sure to point out first that things need to be taken away from the game against Colorado, but at the same time, there’s nothing to be gained by taking it with you.

“We still have to learn from that game, but absolutely we have to go in tomorrow and win the game,” he said. “This time of the year, you have to buckle down and play, you can’t have something linger that happened in the past game. Forget, move on and be the best that you can be every day.”

As far are learning from Colorado, that message goes two-fold.

The Kings have to learn from their own shortcomings from two days prior, but there’s also an opportunity to try and take away things from their opponents, which will come into play moving forward. There’s only one Colorado group, but things like pace, decision making and individual battles are all important.

“Their pace, that’s how it’s going to be from now on, the final stretch to the playoffs, that pace is going to be high and we have to be prepared to play at that level,” he added. “Make quick decisions, win our one-on-one battles, that’s what it comes down to this time of the year.”

Playing Within
A couple of notes from the interview with Arvidsson today.

At this time of the year, it’s about playing within yourself and playing within the structure of the team. Arvidsson articulated those things well today.

On the team knowing the structure and playing within it
Everybody should know how we’re playing and it’s for sure different now, in that you don’t have the time to work on things, the practice time. You’ve got to know what you’re going out there, how to execute and like I said, just play the best game that you can play.”

On playing within yourself and winning your game
Taking care of your game, that’s what matters. Every single inch of a battle, of competing, that’s what matters. You have to win your territory, go in there for your teammates and really battle for them. When I was with Nashville, when we went to the Final, we were the last team in. We came in hot into the playoffs, but we were the last team to get in. We had a lot of injuries over the course of that playoffs and we had guys coming in, stepping in, young guys. They did that, they found it within themelves.”

McLellan, more or less, touched on both points in one answer, in a question pointed to the direction of Arvidsson’s quotes.

The Kings have established what they are at this point, and with 14 days remaining until the final regular-season game on the schedule, that’s not changing. There’s no time for it to change. It’s up to individuals to understand how the team wants to play, and get their game to its highest level to fit within that style and structure. We’ve seen it before, and with six games remaining, the hope is to see it again.

“I think, at this time of the year, as an individual, you have to be prepared to bring your best,” he said. “You know where you fit into the structure, where you fit into the system, you know your coverages, it’s not changing right now. That’s what we’ve tried to get through to the players, we are what we are. This is how we play, this is how we play situations, we’re not changing things. We may tweak a minor thing based on a team, but the overall body of work, for nine months, is what it is. Now, it’s time for the individuals to bring their game, and fit it into that environment.”

Goalie Thoughts
Lastly, Insiders, a quote from Todd McLellan regarding the usage of his goaltenders.

Throughout the first 76 games, we’ve seen our fair share of both Jonathan Quick and Cal Petersen, with a small amount of Garret Sparks thrown in as well. At this stage in the season, the Kings have both Quick and Petersen available, with each starting nine games over the last slate of 18 for the team.

Over a full season, both need to play, the days of one workhorse playing 70 games is likely a thing of the past. With six games remaining, however, and just one set of back-to-backs, McLellan is hopeful that one of the two will get hot to the point of where he can claim the net.

“At this time of the year I would prefer that, around this time, somebody got really hot,” McLellan said. “That’s what I would prefer. I don’t think that, during training camp, you can sit there and say this guy is going to play this many games. Not where we started as an organization, either, we have to develop, but right now, get hot and play.”

Today’s practice saw Quick off earlier, with Petersen on later to work with the skaters. How that shakes out tomorrow, and if either one will claim the net for the bulk of the rest of the stretch, remains to be seen.

Morning skate tomorrow at 10:30, before the first of the final six games tomorrow evening versus Columbus.