Catching up with Dustin Brown on return to action, new-look line and an exciting finish ahead 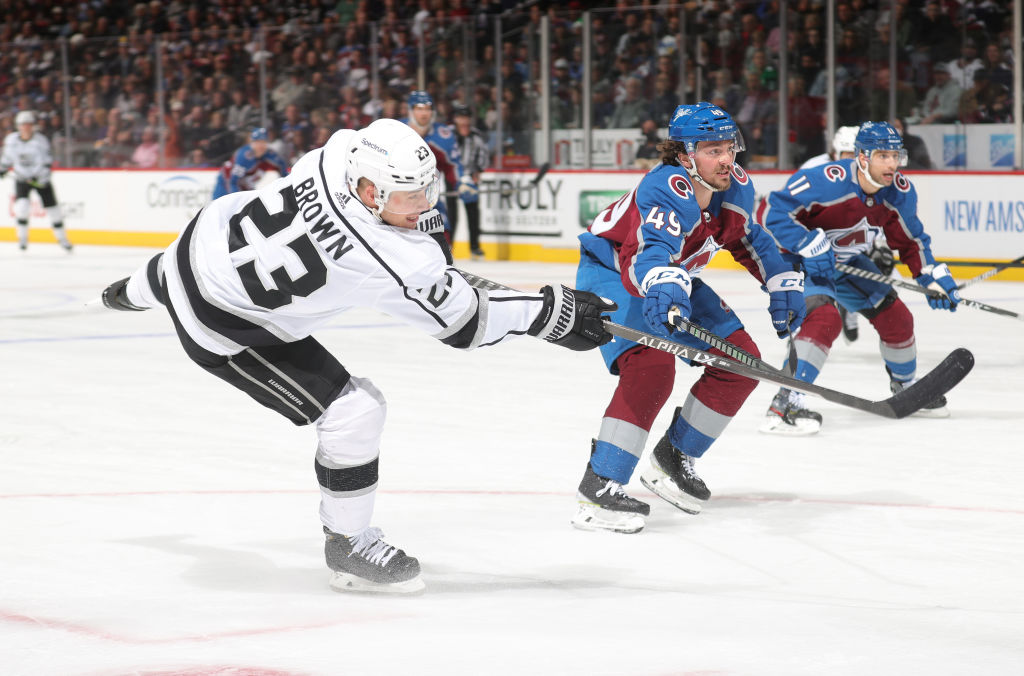 In the house that Chicago’s number 23 built, it felt like a pretty fitting place for LA’s number 23 to return to action.

Dustin Brown was back in the lineup on Tuesday at United Center against the Blackhawks, his first game played in a month, and he brought with him a pair of assists, strong underlying metrics and an overall welcomed presence on a new-look third line that impressed. The performance of Brown and his trio gave the Kings four reliable lines on that evening, a balance the team has not achieved all that often this season.

In some ways, the return feels somewhat remarkable.

Early on in his return process, Brown wasn’t sure where his road to recovery would take him. He wasn’t sure if he would be able to return to the ice at all this season.

“It’s getting better every day, considering where I was a month ago, not sure if I was going to play again,” he said yesterday.

The injury was gruesome – his finger more or less exploded – but the natural process of healing allowed him to eventually work his way back into practices and then, finally, games.

The Kings have encountered just about every injury known to human this season, but in hockey, injuries are typically grouped into upper-body and lower-body injuries. Brown’s being of the upper-body variety allowed him to remain on the ice, giving him steady practice time in terms of skating, so that the legs weren’t a problem. That’s not a luxury afforded to every player coming back, with many lower-body injuries taking more time in that regard.

“Being a finger injury, I was able to keep my legs underneath me for a couple of weeks prior, so that helps,” he said. “It’s a little different than a lower-body injury, but overall I felt pretty good.”

As the Kings’ timeline regarding injured players has progressed, so has the look of the lineup at the forward position. When he came back, Brown and Lizotte both knew that the possibility of playing with each other existed.

While teammates since 2019, the two had played fewer than 100 minutes together at 5-on-5 over the course of three seasons. On the left, however, was Alex Iafallo, Brown’s second-most familiar linemate over that span, with the pair of wingers logging nearly 1,400 minutes together at even strength.

What it broke down to be was a new-look third line, providing some consistency to the team’s most shuffled line throughout the course of the season.

“Me and Lizzo have been talking about it for a while, playing together, just based on how the lineup is kind of shaking out,” Brown said. “He’s a really responsible player, trusting as well, so it was a pretty easy transition. Then, you throw in Al, I’ve played with Al enough to kind of mesh together and Lizzo is easy to play with because he works hard, he’s always in the right position and he’s responsible. Pretty easy transition.”

The energetic, firecracker Lizotte, centering the positionally sound and puck retrieving Iafallo and the motivated, physical and bruising Brown made for an effective line during their first game together.

Even on night two, a six-goal defeat, the trio was on the ice for one goal for and one goal against, and that goal against was the ninth of nine, with the game well out of reach. Overall, they were positive in attempts and scoring chances on both nights, spending more time in the offensive zone than the defensive.

“We weren’t in our zone a whole lot,” Brown noted after the Chicago game. “We just played it the right way and when we did, we got a lot of scoring chances, at least that’s the way it felt to me.”

In Brown’s time away from the team, he was able to watch from afar.

Brown has always been one of the best on the team at giving an educated take from a longer lens, usually offering up an easily digestible viewpoint that you learn something from listening to. He felt that, overall, the group did a solid job in the absence of so many regulars. When things got away, it was moments in games. Too often, one moment became two, became three, etc.

Brown’s return in Chicago was a great example of that not happening.

When the Kings conceded their first goal, which saw their 2-0 advantage cut to 2-1, Brown’s line responded on the next shift with a bumper-shift goal, restoring the two-goal lead. One moment against, sure, but that one moment ended there. Against Minnesota and Colorado, you saw first-hand what happens when one moment becomes several.

As the Kings progress down their final six regular-season games, having Brown at the level he’s been since coming back from injury is an incredibly important player in the team’s quest for the postseason.

In the bottom six, the Kings lack players with playoff experience and savvy. Brown has both in spades. His experience and effectiveness can be a huge boost for the Kings, and the veteran forward knows what’s at stake. He’s excited to play in these types of games – because he’s lived the alternative – and he knows the value of a stretch run for his younger teammates.

“These are fun games to play in, as a player,” Brown said. “I’ve played in a lot of the other games, just based on my career, but I’ve also played in a few of these games. Just from the perspective of playing, they’re so much more fun to be in, because they’re meaningful games at a meaningful time of the year. We have some guys in there that have been through it, but it’s also a really good experience for some of these guys to experience it. Another step in their progression individually, and as a team.”

Another step in the progression.

For Brown, now in his 19th NHL season, he’s hopeful that progression leads to another crack at playoff hockey.

Kings are back on the ice tomorrow morning, Insiders! Practice is scheduled for 11 AM at Toyota Sports Performance Center, full coverage to follow.

By Jack Jablonski
345 Comments
Behind the Scenes