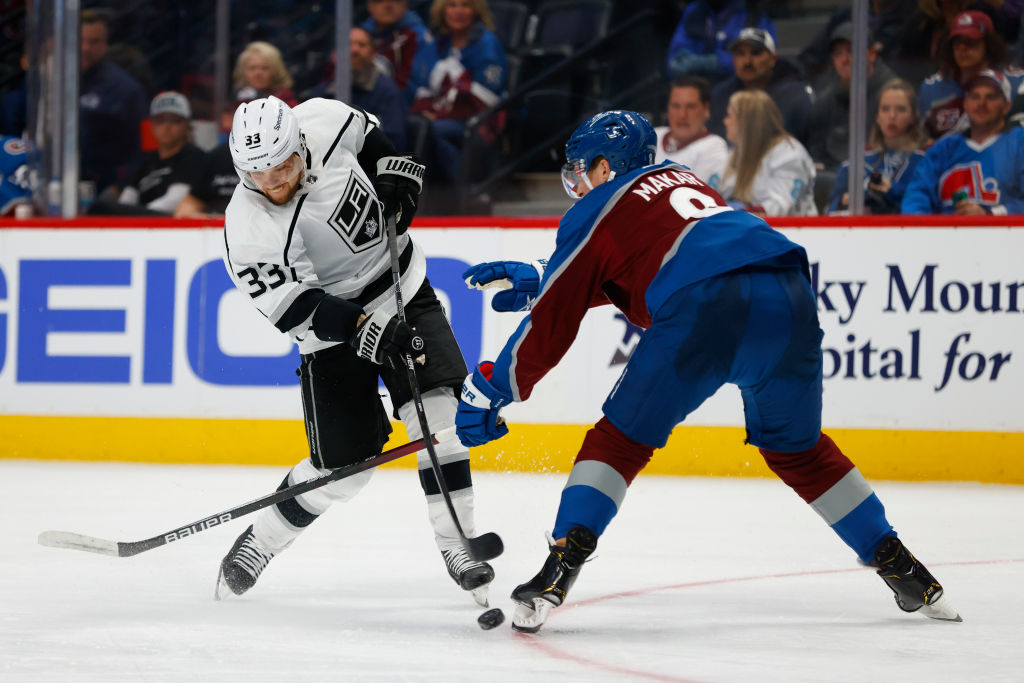 The LA Kings suffered their most lopsided road defeat of the season, a 9-3 loss in Colorado to end a three-game roadtrip.

The Kings got goals from Adrian Kempe, Alex Iafallo and Phillip Danault in the defeat.

Colorado scored four goals in the game’s first 10:56 to take a 4-0 advantage into the first intermission.

First, after controlled, offensive-zone time for the hosts, Nicolas Aube-Kubel opened the scoring, as he capitalized on an uncleared rebound and slotted it past Jonathan Quick for his tenth tally of the season. Colorado struck again on the following shift, as Valeri Nichushkin was first to a loose puck, deked to the backhand and slotted home his shot 33 seconds after the game-opening goal, pushing the lead to 2-0.

The Avalanche scored twice in less than a minute later in the first as well, opening up a 4-0 advantage. First, on the power play, the Avalanche moved the puck around the umbrella, with Cale Makar feeding Nathan MacKinnon for a one-timer from the left-hand circle, a goal that prompted a goaltending change for the Kings. Colorado scored just 41 seconds later, however, as Aube-Kubel got his second of the night after his shot deflected off a Kings stick and in.

The Kings pushed back early in the second period, burying the game’s next two goals to get back within a pair. First, after a good shift in the offensive end by the top line, Kempe got on the end of a rebound from close range, beating Colorado netminder Darcy Kuemper for his team-leading 33rd goal of the season. Iafallo made it 4-2 just past the halfway mark, as he deflected a Jordan Spence shot from the right point past Kuemper.

Colorado bounced back just over two minutes later, however, with forward Andre Burakovsky restoring the three-goal advantage with a one-timer from the slot. Makar scored his team’s second power-play goal of the evening less than two minutes from the break, burying MacKinnon’s feed on a one-timer of his own, bringing the score to 6-2 through 40 minutes.

MacKinnon added his second goal and third point of the evening less than two minutes into the third period, pushing the Colorado advantage to 7-2. Makar hit MacKinnon on a breakaway, with the latter snapping his shot past Petersen on the blocker side to push the lead to five goals.

Colorado struck twice more in the first half of the third period, as Nichuushkin and MacKinnon each scored, with MacKinnon collecting a hat trick. Phillip Danault pulled one back for the visitors, less than five minutes from the final buzzer, to make it 9-3.

Hear from Anze Kopitar and Todd McLellan following the game.

Anze Kopitar
On the challenge of finding their footing right off the start tonight
Yeah, obviously they came out strong and we didn’t match the intensity. Next thing you know, we’re down 4-0. It’s obviously the start that we can’t afford and that’s about it.

On the importance of moving past games quickly after a game like that
We’re still very much in the hunt, obviously, and definitely not the performance that we wanted tonight, especially at this time of the year. We’ve got to look at this one, but at the same time, obviously correct stuff and make sure that this is not going to repeat, because it is crunch time for our team and looking ahead to Saturday.

On the concern with the starts of periods, looking especially at the first
It’s a variety of different things. A 4-0 start is a lot more concerning than the start of the third period. I’m not saying that the start of the third period was acceptable, but there were things in the second where it looked like the team that we need to be going forward. If you look at the overall picture tonight, they’re a playoff team, they’re at the top of the league and we did not look like a playoff team. We have another six games left on our schedule and we’ve got to make sure that all six of them are better than that.

On the team’s ability to push back throughout the season and respond
It’s not going to do us any good if we sulk about this one. Like I said, it’s going to be addressed for sure, we’re going to look at some stuff, but then again, there’s no time to look back at this one now. We have to focus ahead on the next game and make sure when we come home, that we look like a playoff team.

On his impressions from tonight’s game
We didn’t have anything, we can’t play that way against this team. We found some legs in the second, but then we made a lot of mistakes and it ended up in our net. I think I’ve answered all of the questions you could possibly ask.

McLellan on it taking an entire team move past this game
Yeah, like I said, I can’t answer the questions, I’ve already explained the game. We can put earrings on a pig if we want, but it’s not going to make it any better. That was awful and we move on. We get an opportunity to play more games, so good for us and we have to be better.

– Defenseman Jordan Spence collected two assists tonight, the first multi-point game of his NHL career.
– Forward Adrian Kempe scored his team-leading 33rd goal of the season.
– Forwards Alex Iafallo (1-0-1) and Blake Lizotte (0-1-1) each found the scoresheet tonight, giving their line with Dustin Brown seven points (3-4-7) over the last two games.
– With an assist on Kempe’s goal, defenseman Troy Stecher collected his first point as a member of the Kings.
– Tonight’s game was the most lopsided road defeat of the season for the Kings and the second largest in total (0-7 vs. BOS).
– Colorado scored on each of its two power plays tonight, pushing its record on the season to 5-of-5 in three games against the Kings.

The Kings are not scheduled to skate tomorrow, off of the back-to-back and travel. The team is set to return to action on Friday morning for practice at Toyota Sports Performance Center at 11 AM.