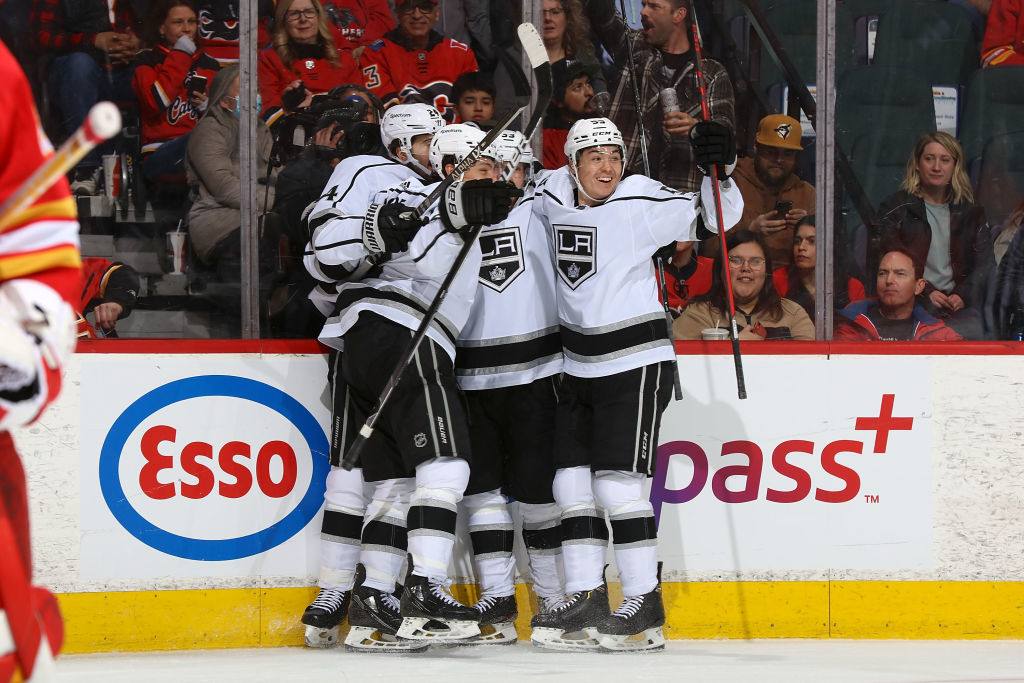 The LA Kings came from behind late in the third period to force overtime and earned the win via the shootout during a hard-fought, 3-2 victory over Calgary on Thursday evening.

Forwards Alex Iafallo and Viktor Arvidsson scored for the Kings, while Cal Petersen made 26 saves, as well as all three in the shootout, to earn the victory.

After a scoreless first period, the Kings broke through just over a minute into the second period. Alex Edler snapped a quick outlet pass to Adrian Kempe, creating a 2-on-1 rush for the Kings, with Iafallo on the other wing. Kempe sent Iafallo in alone, with the winger burying his 15th goal of the season to put the visitors on the board. Iafallo’s goal snapped a 23-game goalless drought.

Calgary struck back with two goals in the third period, however, to take a 2-1 lead towards the back half of the frame. First, on the man advantage, a blocked shot fell directly to Johnny Gaudreau at the back post, and he made no mistake on the finish, tying the game at one. Calgary scored again with 6:27 remaining in regulation, as Erik Gudbranson’s shot from the right point evaded traffic, and Petersen, and went in for his sixth goal of the season.

The Kings fought back, however, to force overtime with another game-tying goal late in the third period. Defenseman Olli Maatta pinched in from the left point to keep the play alive, before Phillip Danault fed Arvidsson right out in front, with the latter burying from close range to force overtime for the second straight night.

After a scoreless overtime period, forward Lias Andersson scored the lone goal of the shootout, while Petersen turned aside all three shots he faced, to secure the second point.

On the team’s comeback mentality again tonight
Yeah, when they came and took that 2-1 lead, knowing that it was on a back-to-back, it could have been really easy for us to just pack it in, we had a built in excuse, but I don’t think that’s the kind of group that we have. Everybody battled back and made the most of this opportunity and we were able to get an extra pint out of it. It was a tremendous effort by everybody, and a really good character win.

On the team playing to its identity tonight in Calgary
I think it’s one of those things that you have to work for your opportunities, and your chances, for the ability to have things go right. We knew, to play against a team like Calgary, we would need to play the way that helps us win, not try to play their game. I think we stuck to what we do best, checked for our opportunities and played good defense. We sacrificed for each other and I think that’s a good recipe against anybody.

On the shootout and making all three saves
I don’t know, I don’t want to give up any of my secrets, it’s just being patient. You keep tabs on different guys that go in the shootout, around the league, and hopefully you have somewhat of an idea of what they’re going to do. You just have to read and react and hope you can come out on the right side.

Todd McLellan
On if it’s fair to say that was a massive win for the Kings
Yeah, probably a good way of putting it. It was huge to come back. We’re running on fumes, somebody asked me [earlier] today about the heart of the team. These types of wins, the heart just gets bigger and stronger as we go on. I thought tonight was a more complete team effort, because we rolled four lines and played all six D. It’s good for us and I know we’re not skating tomorrow.

On if tonight’s game was one of the toughest tests the Kings have faced this season
Yeah, I would say so. They’re a hell of a team, they do so many things well and they don’t give up a lot. They test you in all three zones, we checked well, we did the things that we needed to do at certain times and Cal did what he needed to do. We’ll take ugly wins, we’ll take good team wins, this time of the year you’ll take anything you can get. We’re happy to have the points in the bank.

On selecting Lias Andersson to lead off the shootout
It’s not surprising at all for us. He’s often going to be the number one guy for us when he’s in the lineup. It’s what he does really well. He’s very good at it.

On Alex Iafallo’s goal and getting off the schneid
Happy for him, because he’s had a lot of chances that haven’t gone in for him. You could see him squeezing the stick a little bit, but in the meantime, he’s paid attention to the other details in his game. Often, when top-end players go dry for a while, they begin to cheat and it doesn’t go well for them. Al isn’t that type of player. The whole bench was happy for him. If I’m him now, I’m shooting every puck I get my hands on, because maybe he’ll turn hot.

On the resiliency tonight to fight back in the third
That’s not surprising for us. We were down 3-1 in Edmonton, we have a pretty good pushback mentality after we get scored on, bump-up shifts we call them. We’ve learned some hard lessons when we didn’t have that, but now we do, so the team doesn’t quit. It’s who we are, it’s in our DNA, it’s a good quality to have at this time of the year.

On the ability to play four lines successfully tonight
It’s huge. We expended a lot of energy last night to get a point in Edmonton. 65 minutes, shootout, playing against a heavy, hard team like Calgary, it zaps you quickly, so you need everybody. That was the plan going in tonight, to roll lines as much as we could. We were fortunate, until the third period, to stay out of the penalty box, so we don’t have to waste a lot of energy there. I thought Cal got us timely whistles when we needed them, so we could shorten the shifts up. We didn’t worry as much about matching, just get fresh guys out all the time. It helped.

Notes –
– Forward Alex Iafallo became the fifth Kings player to reach 15 goals scored this season, with his second-period tally. Iafallo snapped a 23-game drought without a goal in the process.
– Defenseman Alex Edler collected an assist on Iafallo’s goal, giving him points on back-to-back nights
– Viktor Arvidsson scored his 19th goal of the season tonight, his first goal and third point in five games since returning from injury.
– Forward Phillip Danault earned a point for the second straight game, with the primary assist on Arvidsson’s game-tying goal.
– Goaltender Cal Petersen made 26 saves on 28 shots and turned aside all 3 shots he faced in the shootout, as he earned his 19th victory of the season.

The Kings will not practice tomorrow, coming off the back-to-back set. The team is scheduled to return to action on Saturday, with the final game of the road trip against Winnipeg.