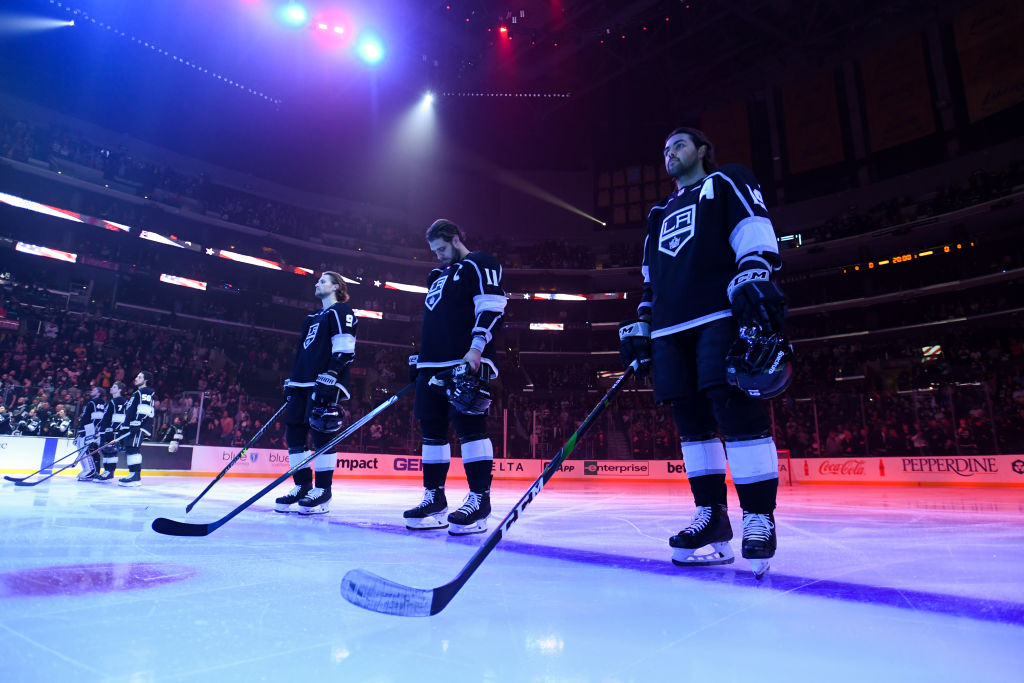 First, the Kings did skate this morning, following yesterday’s 6-1 defeat against Seattle. Today’s skate was pre-determined. The team had an off-day on Sunday and a practice day today on the calendar independent of the results of the games on Saturday and Monday.

With a 3-in-4 upcoming in Canada, and the team already in the midst of a 4-in-6, then a 5-in-8, practice time will remain at a premium for the Kings. Though there is much disappointment – from both players and coaches – after last night’s game, the opportunity to do a ton of correcting on the ice isn’t there, with the team preparing for Edmonton as best they can with video work and a couple of targeted drills during today’s practice.

“We still had planned to skate, we had a day off on Sunday and we were flat, so we planned to skate,” Todd McLellan said. “The skate wouldn’t have changed much, because our needs that we addressed were Edmonton-based, not even Calgary-based, this morning. We were only on for 20 minutes and that’s how it’s going to be until the end. Our meeting, addressing the team through video, was prepared last night.”

With that being said, the team returned to the alignment they started yesterday’s game with during today’s short practice, listed below –

McLellan said today that there wasn’t anything he saw during the segment from last night’s game with the lines changed that he planned to keep, with that exercise simply to try and spark something during a game in which the Kings lacked spark.

Brendan Lemieux also skated for the full skate today. Lemieux has yet to play since he suffered a lower-body injury in Columbus earlier this month and remains on injured reserve at this time.

The group of six who skated last night against Seattle were joined by Alex Edler and Austin Strand, who were scratched and Drew Doughty, who appeared a bit more active in terms of puck handling and drills, an encouraging sign for the Kings.

Per Todd McLellan this morning, none of the injured players with the Kings will make the trip to Western Canada so the Kings appear set to travel with the group that played last night, plus the aforementioned pair of Edler and Strand. No word at this time if the team plans to add an additional forward for the trip, but as of this writing, just 12 healthy forwards are on the active roster.

Opportunity
McLellan shared with us a couple of thoughts on opportunities this morning.

First, he talked about what he wants to see from players who are potentially checking into the lineup. The question was phrased about Lias Andersson, who replaced the injured Blake Lizotte yesterday, but the answer was more general to include not just players coming in, but players in all roles.

It meshes with some of what McLellan said the other day – Don’t be average. Making mistakes, in pursuit of making a positive play that impacts the game, is fine, assuming that mistake is learned from and not replicated. But don’t be just okay.

“Have an impact on the game, it’s as simple as that,” McLellan said. “In the lineup, out of the lineup, Dustin Brown at 20 years pro, Jordan Spence at 10 games in the NHL, it doesn’t matter. You’re in the NHL, you have to have an impact. It’s what our guys are learning right now, it’s different right now than it was the last few years, it’s completely different. They’re learning that.”

When asked about missing the qualities that Lizotte brings to the lineup, McLellan doubled down a bit.

Lizotte is his own player, bringing energy and willpower that can sometimes help to bring others, or sometimes drag others, into a game. Something we’ve heard from McLellan a few times this season regarding Lizotte. While pointing out a couple of other individuals who do have that in their game, McLellan was quick to reference the opportunity it presents to others. Can someone else step up and take on more of that role? Would certainly be beneficial if they did.

“Yeah, I think that Sean Durzi can do that, I think Pep can do that, other guys that can do it in different ways, but Lizzo has that engine,” McLellan added. “We missed him last night, I think that was evident, but what an opportunity. If you’re sitting on the bench, and we don’t have Blake Lizotte in the game, what does he do? I can do that for four shifts. Somebody missed the opportunity to do it. I don’t know if it’s Lias, or whoever it is, but what a great opportunity.”

Kings On Kings Podcast
Kings players Trevor Moore and Troy Stecher joined myself and host Jesse Cohen on the All The Kings Men Podcast over the last week. A good chance to listen to both players talk in a little bit less formal setting, less about the questions you might hear during a formal media interview and a bit more storytelling and personality-based interviews.

Trevor Moore is from Thousand Oaks, CA, if you didn’t already know. What’s his connection to fellow Thousand Oaks native Amanda Bynes? Find out on the podcast! He also talks his transition from a Kings fan to a King himself, his thoughts on college hockey rivalries in the room and, of course, his incredible chemistry with Phillip Danault and Viktor Arvidsson.

Troy Stecher is the newest member of the LA Kings and he talks about his midseason journey from the Detroit Red Wings to Los Angeles. He also touches on his relationship with Alex Edler, from their time as teammates in Vancouver, plus learn about what he’s building in his spare time.

GM Meetings
Lastly, sharing a few updates from the GM Meetings that have come out on social media today.

GMs agreed to have further dialogue on the LTIR/playoff cap idea at the next meeting in Montreal at the draft in July. The NHL has already had discussions with the NHLPA about LTIR. Doesn’t necessarily mean anything will change, but it’s an ongoing dialogue.

Bill Daly says the #NHL is drafting an agreement with the #NHLPA to create a database between the league’s Central Registry and the union for no-trade lists to be filed, in an effort to avoid a future situation that unfolded with Evgeni Dadonov last week.

We’ll have a feature coming later on this evening, Insiders, on Todd McLellan’s path to 1,000 games. A good look behind the scenes at McLellan’s career to becoming one of the longest-tenured head coaches in history, with a story that goes well beyond the NHL.