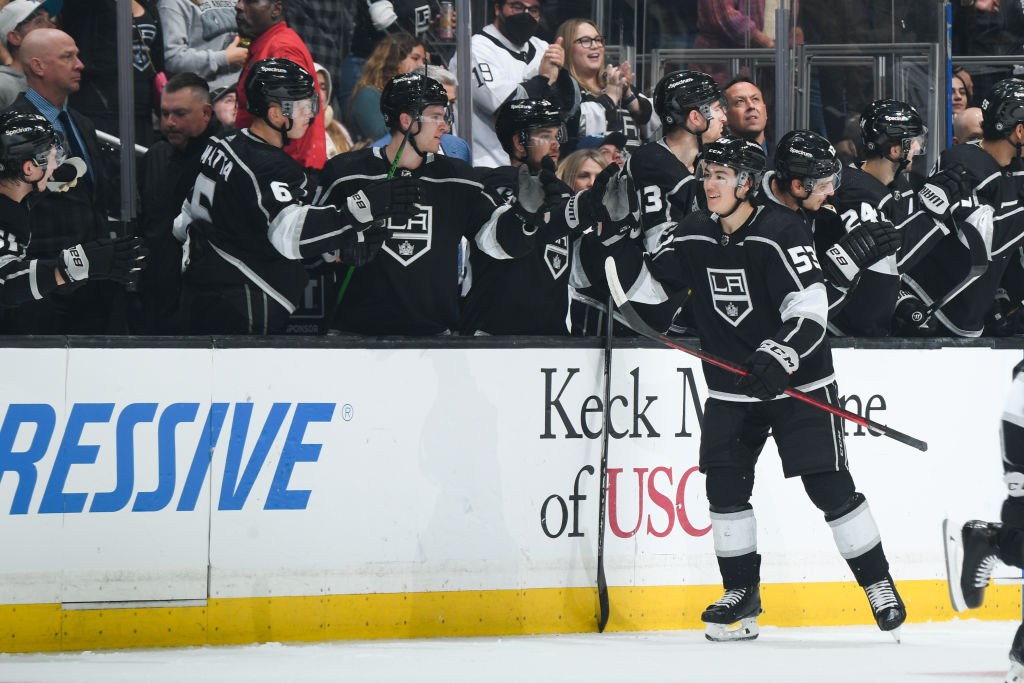 The LA Kings made it points in three straight games with a 4-2 victory over the Seattle Kraken on Saturday evening on home ice.

Defenseman Jordan Spence scored his first career NHL goal, while Gabe Vilardi, Anze Kopitar and Sean Durzi also scored in the win. Cal Petersen made 23 saves in net to pick up the victory.

The Kings opened the scoring with the lone goal of the first period, taking a 1-0 lead into the first intermission. After Rasmus Kupari forced a turnover around the net, Vilardi and defenseman Olli Maatta executed a give-and-go, with the latter hitting the former on a shot-pass for the redirection goal, Vilardi’s second of the season at the NHL level.

Early in the second period, the Kings doubled their advantage, as the top line got on the board. After Adrian Kempe hit Alex Iafallo with a stretch pass, Iafallo beat his defenseman to the inside and hit Kopitar, who deked to his forehand for the goal. Kopitar’s goal was his 17th of the season, with his linemates each collecting an assist.

Seattle pulled a goal back, however, to bring itself back to within a goal. Forward Daniel Sprong, acquired at the trade deadline, took the puck through the neutral zone and created space for himself in the slot. The Dutch-born winger snapped a shot in clean from the hashmarks for a 2-1 game.

The hosts were able to re-gain their two-goal advantage headed into the second intermission, however, through Spence’s first career NHL goal. After taking a feed at the right point, the rookie blueliner sent a shot through traffic and inside the far post, beating Seattle netminder Phillip Grubauer.

The Kings added an insurance marker early in the third period, as they scored on the power play for the third consecutive game. With the teams playing 4-on-3, in favor of LA, defenseman Sean Durzi crashed down on a puck that bounced off the endboards and one-timed it past Grubauer for the goal.

Seattle scored a late goal, from forward Morgan Geekie with just four seconds remaining, but it had no impact on the result.

Jordan Spence talks with the media about his first career goal!#GoKingsGo | @LAKings pic.twitter.com/i0dEd0FKX7

On the play leading up to his goal
That was great by [Kupari], I actually didn’t see what happened, I just saw that the puck came out and I was coming off the bench. I saw Olli there and that we had a 2-on-1 against [their defender]. He made a great play to me and my job was easy.

On getting rewarded with a goal tonight, and his progression to his recall
Yeah, there were certain things in my game back in October that I wasn’t doing very well, specifically it was the defense. I think I’ve improved on that. Playing on the wing, I’ve played it before, I played it in my draft year, it was a bit of an adjustment, but it was nice to score for sure. I feel like my defensive game has improved, but at the same time, I still do want to contribute offensively. Nice to see one go in for me.

On getting rewarded with a goal tonight
I think it’s huge, especially in the d-zone, being a winger, you want to make the right plays coming out. I think that’s my game, honestly, playing the puck down low, I think I’m good at creating space for myself, drawing two guys in and finding the open guy. I think that’s huge for my game, personally.

Todd McLellan
On the satisfaction of being on the other side of “meaningful games”
There is, it’s called progress. There is satisfaction in that, but it doesn’t end, we’ve still got to grow and move the needle forward. I keep hearing the term meaningful games later in the year. Whether that came from people in this room, people in our room, phone calls, friends, whatever, it’s a common term that’s used in sport and we’re doing that right now. It’s a great thing for our team. Kopi, Quickie, I guess Kempe [and Iafallo], have playoff experience as a King. I think we’re gaining that right now. This is the playoffs for us and we’ve shown signs of growth during it. It’s going to have to continue for whatever we have left.

On power-play goals in three straight games
I think Phil has made a difference there. We start with the puck, Phil or Kopi, one of the two, is always hot in the faceoff circle so we start with the puck. We seem to be able to retrieve it better and keep plays alive, I think we’re a little harder, heavier in and around the net and that’s where Phil is positioned. Because of that, we’re able to get the puck there and as a result, we’re scoring on some of the garbage that we weren’t earlier in the year.

On having a better connection between defensemen and forwards than on Thursday
Much better today. We looked more like we normally do, coming out of our zone, checking. We’re never going to be mistake free, there’s still things that we can do better, but they’re a difficult team to play against. They grind, they get on top of you quickly, they’re good along the wood, they get to the net. They tested us in a lot of different areas, and we passed the test tonight, but we’ve got to do it again in two nights.

On the little plays that led to success tonight
Lots of, we call them shares, 3, 4 foot plays, not long plays but simple little plays that have to be made. I thought we stayed over the top of bouncing pucks, we might as well have played with a tennis ball tonight out there, it was horrendous, for both teams. Early in the game, I think we were reaching a little bit, we stayed over bouncing pucks, those are all little things that make a difference at the end of the night. That and simple plays, getting to the net, screens, tips, it all adds up and it takes 60 minutes of that.

The Kings have a scheduled team off day tomorrow and will return to the ice on Monday at 10:30 AM for morning skate at Toyota Sports Performance Center.