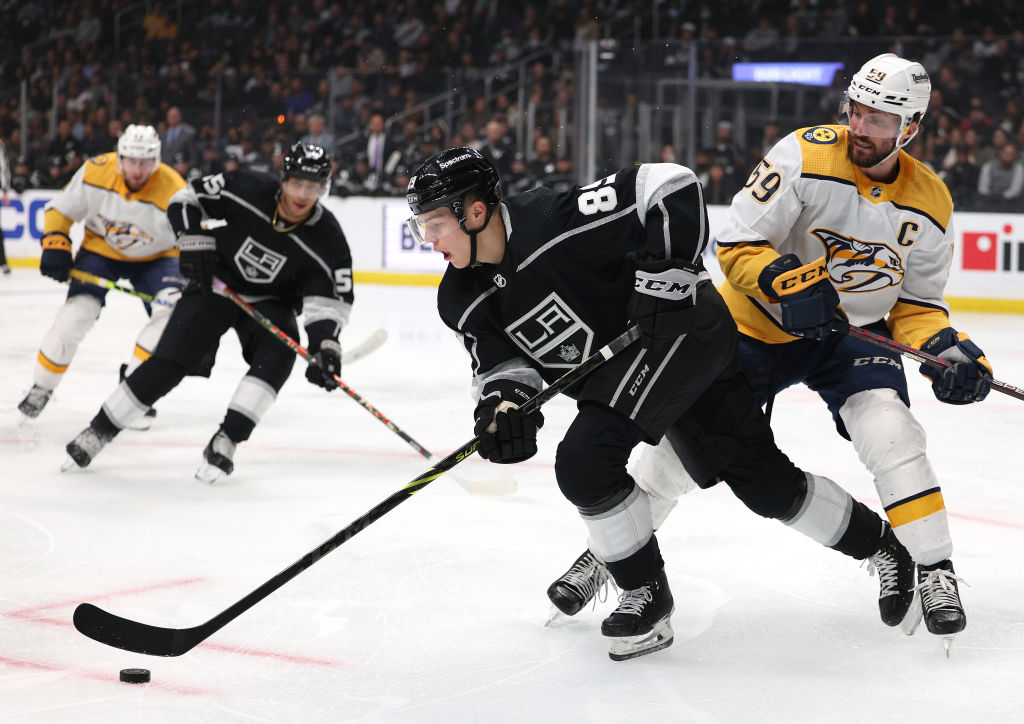 The LA Kings bounced back from Saturday’s defeat with a commanding, 6-1 victory over the Nashville Predators on Tuesday evening at Crypto.com Arena.

The Kings got two goals apiece from Quinton Byfield and Adrian Kempe, while Arthur Kaliyev and Trevor Moore each scored on special teams. Goaltender Jonathan Quick made 24 saves to earn the victory.

The Kings opened the scoring less than four minutes into the game, as Kempe got on the board with his team-leading 27th goal of the season, and his second in his last three games. Forward Anze Kopitar won a battle along the boards in the offensive zone, stealing the puck and feeding Kempe in the slot, where he buried with a quick release for the game’s first goal.

The hosts struck twice more in the first period, with both goals coming via special teams, to take a 3-0 lead into the first intermission. First, on the power play, Kaliyev delayed, dragged and snapped his shot underneath the crossbar on the glove side for his 12th of the season. Later, with the Kings shorthanded, Blake Lizotte used a combination of speed and will to create space down the right wing, before he hit Moore in front for the tap-in goal.

Nashville got on the board early in the middle stanza, through an impressive individual effort from forward Phillip Tomasino. Tomasino won a battle in front to chip a puck around a pair of Kings defensemen, before he whacked it out of mid-air in one motion for the goal.

LA responded early in the third period, with the young third line contributing. Rasmus Kupari evaded a hit down the right wing to create a 2-on-1 in tight, and he went across the crease to hit Byfield for the goal, pushing the Kings’ advantage back to three. Byfield’s goal was his third of the season.

The Kings tacked on an additional pair late to push their advantage to five. First, with an empty net for Nashville with more than seven minutes remaining, Kempe picked up his second of the night to make it 5-1. 30 seconds later, Byfield made it two for himself, as he capitalized on a defensive-zone turnover, firing off a defenseman and in, for a 6-1 advantage.

Hear from Moore, Byfield and Todd McLellan after tonight’s game.

Quinton Byfield
On his first two-goal game at the NHL level
I’m happy, definitely. I think, playing with Koops and Gabe, they have a lot of skill. Gabe found me earlier on in the game and I didn’t get to bury that one, but Koops found me later on and I got it. I had to bury that one and I’m happy I got it.

On the budding chemistry between himself and Kupari
I think growing with a line takes a little bit. We’re both young players, he usually plays center as well, same as me, so we never really got to play together. It definitely took a little bit, but he played a great game, he was moving his feet and I was just trying to get available.

On the confidence of getting two goals tonight and moving forward
It helps quite a bit, I don’t know how long the drought’s been, but definitely a few games. Just being able to score and having that feeling of knowing that I can score and I can beat goaltenders in the NHL is definitely a confidence booster for me.

On the level of pressure and expectation he puts on himself
They’re definitely high. I like to have a lot of confidence in myself, but pressure definitely comes with where I was slotted. There’s a lot of eyes on you. I just want to produce and help the team as much as I can and I try to keep away as best as I can from looking at that stuff. I just go out there and try to perform at my best.

Trevor Moore
On winning a game by five goals
Yeah, [that’s nice] for sure. I was looking at our goal differential before the game and it’s kind of weird that we were just +1. It was nice to get a couple more goals tonight and make it a little bit easier.

On his shorthanded goal and Blake Lizotte’s play
He did literally everything on that play. He went hashmark to hashmark, held that guy on his hip and then the D just jumped over to him. Great play by Lizzo……he does those kinds of things all the time. He’s a super important player for us, he can do literally anything asked of him.

On the team’s ability to bounce back from losses this season
I think our leadership is second to none in the league, we have great guys in there. Quickie stood on his head tonight, as he always does. Our structure took care of us, we believe a lot in it and the young guys, coming up from Ontario, they did a great job.

On the power play tonight
Obviously it’s a nemesis for us, we know we’ve got to get better at it. Todd told us before the game to buckle up, that this was a team that was going to test our physicality. I think that power play and penalty kill, you’ve got to compete all the time and I think that we were ready tonight.

On Phillip Danault’s leadership and the two of them stepping up with others out
It’s awesome. Phil is a great leader who does it right, all the time, everywhere he is. I’m just trying to do what he does, keep pushing and trying to lead a little bit on the team is great.

Todd McLellan
On if he feels tonight was a complete, 60-minute effort
I would, yupp. Without explanation, it was. It was a good start, [Nashville] played last night in Anaheim, got them back-to-back and we had a real good push, a good start. Special teams were alert and everybody was important, all four lines contributed, and all six D.

On getting physicality throughout the lineup tonight
It was, and physical play comes in a lot of different forms. It’s not just hitting somebody, it’s taking a hit, body positioning, it’s net play, faceoffs, blocking a shot. Phil blocked a shot, Kopi blocked a shot, that’s physical play. We got a lot of that from a lot of people. The kid line was challenged to bring more physicality into their game, they’re big and strong and I thought we saw that from all three. Kopi’s line was poked a little bit and they performed really well tonight. Good sign for all of us.

On what he liked from Rasmus Kupari’s game tonight
Direct, straight lines, played with an edge. He won a lot of races to the puck and then when he got there, he won a lot of battles. He played with authority, he really asserted himself tonight and he wasn’t taking a backseat to anything. Good for him.

On the turnaround of the power play tonight
I thought we aggressively hunted the puck. We adjusted a few things on entries and breakouts, and we aggressively hunted the puck, we were able to sustain some time in the offensive zone. The puck got to the right guy and he shot it and we’ve encouraged him to do that many, many times, it’s the best asset he has. If he bypasses on that and looks at doing something else, he’s probably diminishing his effectiveness, and obviously we’re talking about Kaliyev. Had some patience and a great shot.

On the goalie pull with more than seven minutes left
We talked on the bench before that, there was a timeout, they gathered, we had a pretty good idea that something was coming. A lot of teams are doing that now. If you lose 4-1 or 5-1, what’s the difference? You have a chance to come back, faceoff’s in their offensive zone and their best players are rested. We were prepared for it.

Notes –
– Quinton Byfield (2-1-3) registered his first career multi-goal and first career multi-point game at the NHL level
– Trevor Moore (1-1-2) extended his assist streak to three games. Moore continues to lead all Kings players in points (38) and assists (26) since December 1. The goal marked his third shorthanded goal of the season, most on the team and tied for fifth-most in the league.
– Adrian Kempe (2-0-2) recorded his sixth multi-goal game of the season and leads the Kings with 28 goals on the year.
– Anze Kopitar (0-2-2) tallied his 12th multi-point game of the season and leads the Kings in assists (38) and points (54) this season.
– Jonathan Quick made 24 saves on 25 shots as he earned his 17th victory of the season.
– The Kings scored a 5-on-4 power-play goal for just the second time in their last 10 games.

The Kings are scheduled to return to the ice tomorrow morning at Toyota Sports Performance Center in El Segundo at 11 AM.