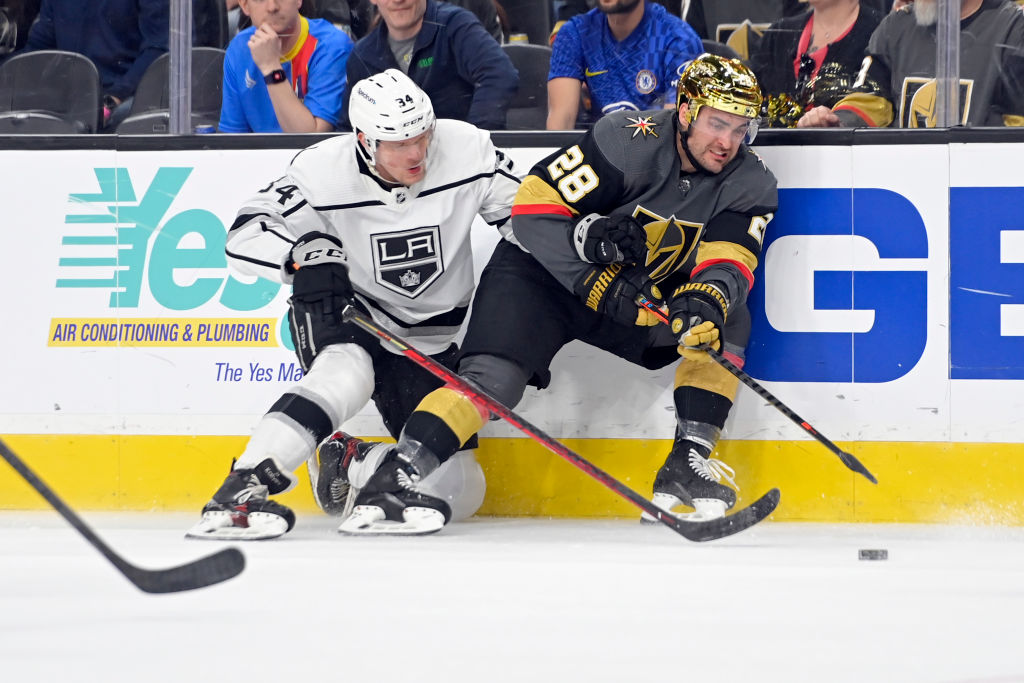 The LA Kings were unable to get a result in Las Vegas, as they fell by a 5-1 final against the Golden Knights on Saturday afternoon at T-Mobile Arena.

Forward Phillip Danault scored the only goal for the Kings, while goaltender Cal Petersen made 19 saves in the defeat.

The Golden Knights picked up the lone goal of the first period, as Evgenii Dadonov opened the scoring late in the opening 20 minutes. After he collected his own rebound, Dadonov rounded the Kings net and scored on a wraparound at the back post for his 15th goal of the season. Defenseman Ben Hutton collected the lone assist on the play.

Vegas doubled its advantage less than a minute into the second period, as forward Chandler Stephenson buried a power-play goal. Just 39 seconds into the middle stanza, Stephenson worked his way to the back post, uncovered, and put home a cross-crease feed from Jack Eichel to put the Golden Knights ahead by a pair.

The visitors fought back, however, to turn a stretch of positive momentum into their first goal of the afternoon. Carrying over between shits, Danault got the visitors on the board midway through the second period, as he got to the front of the net and buried a centering feed from Trevor Moore, halving the LA deficit with his 19th goal of the season.

The Kings were unable to take that scoreline into the second intermission, however, as they surrendered a shorthanded goal less than four minutes from the break. After a failed zone entry at the offensive blueline, Mattias Janmark found himself on a breakaway the other way, which he put in despite a defensive stick by the backchecking Sean Durzi, his eighth goal of the season.

The hosts put the game away late with an empty-net goal from defenseman Alex Pietrangelo, followed by a 5-on-5 goal from former Kings forward Michael Amadio, off of a turnover in the defensive zone, bringubg us to the final score of 5-1.

On building momentum in the second period, but giving up the shorthanded goal
Yeah, obviously that was good momentum for them. Like I said, we’ve got to be a little sharper and that’s those little details again, that was a big chance for them, breakaway on the PK. We’ve got to find a way to eliminate that and play more as a team, be a little bit tighter defensively. Cal was outstanding for us. It wasn’t a 5-1 game, it just ended up that way.

On if those smaller details are emphasized that much more with players out
Yeah, but they’re missing players too, it’s no excuse. We’ve got good players and whoever plays, it doesn’t matter who, has to buy into the system. It shouldn’t be that hard to buy in and any player in the league can eliminate those big mistakes. We’ve got to find a way to do that and we should be fine.

On if he and Trevor Moore take any more onus on themselves with others injured
Yeah, me and Moorsey talk all the time about how we want to step up for the team, that’s for sure. I think everyone wants to step up and obviously we lost today, but we get back at it next game.

On the importance of rest of the next two days, off of an extremely hectic stretch of games
Big rest for us. We’ve got to step back a little bit, look at what we can do better and get a good practice in us as a team, work on the system. It’s going to be huge for us.

Todd McLellan
On if tonight’s game was one that came down to “moments” that went the other way
Self-infliction, tough way to go out. Their power-play goal, primary focus in a meeting of ours. Their shorthanded goal, unacceptable. You take those two moments out and you have a chance at least. Empty net goal and I didn’t like how we finished the game with some players, it was their chance to close it out and they didn’t get it done, but self-inflicted.

On building momentum in the second, but losing some with the shorthanded goal against
In the first period, we couldn’t connect the dots at all, our passing was horrendous. Very clumsy with the puck, whether it was passing or receiving and when we settled down in the second, I thought we started to play a little bit. Certainly, the shorthanded goal took some wind out of us, but even then, in the third we pushed. You can’t gift wrap two goals for a team like that.

On the quantity versus quality of chances both ways
At the end of the night, you can look at the shots on goal, but that’s not going to be indicative of the game. Chances were probably somewhat even at the end of the night and they were able to finish theirs and we didn’t. We did have some loose pucks in and around the paint, we had a couple of scramble moments and we had some looks at the net that we didn’t bear down or finish. I thought the pucks that came from out near the blueline were up high and into his hands, so he was either punching pucks away with his blocker or catching them with his glove to get another whistle and settle things down. We didn’t create a ton of offense there.

On the impact of Danault and Moore
Well, you look at our goal, it was constant pressure from those two, three, Arty was involved in it. Just when the opposition thinks they’re going to breakout and settle things down, they’re there again. It’s a good pair to watch, especially for the younger players right now, it’s a hard league to play in right now, it really is and our team hasn’t experienced that. Regardless of who’s in the lineup and who isn’t, this is a great opportunity for our veterans to be reminded how hard it is and our newcomers, or our kids, to experience it. It’s a different league than it was a month ago or in November, and certainly in October.

On the importance of rest of the next two days, off of an extremely hectic stretch of games
It’s been a long time since we had two days. We’ll rest tomorrow and we’ll practice on Monday, we haven’t had a good practice in a long time, so we need to clean some things up and then it’s right back at it. It’s that way for the remainder of the season. If you’re not learning verbally or through your eyeballs, you’re probably not going to get a lot of reps in practice to get better. We need players that are able to grab concepts and put them into play without really feeling them.

Notes –
– Forward Phillip Danault scored his 19th goal of the season in the second period, second most on the Kings this season and a career-high.
– Forward Trevor Moore collected the primary assist on Danault’s goal, his 27th assist and 38th point of the season, tying him for second on the team in scoring.
– Defenseman Jordan Spence colletd his second career assist on Danault’s goal.
– The Kings conceded a shorthanded goal in the second period and are now tied for the NHL’s highest total in shorthanded goals allowed this season.

The Kings have a scheduled off day tomorrow, before they will return to the ice on Monday morning at 11 AM for practice at Toyota Sports Performance Center.