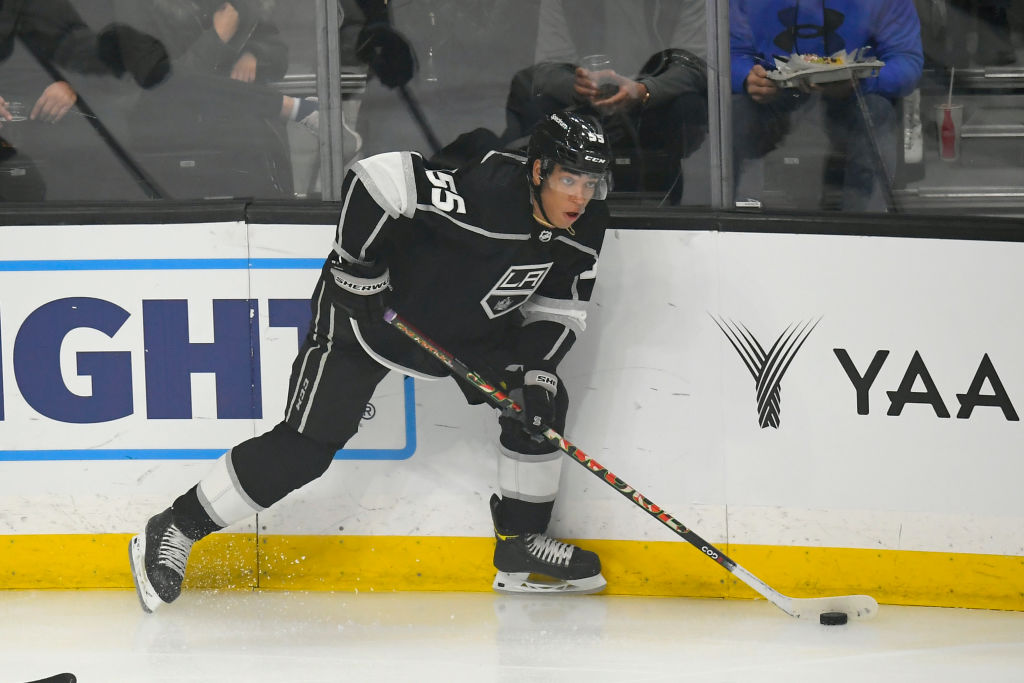 Back at it, Insiders.

The Kings skated this morning at Toyota Sports Performance Center, coming off of yesterday’s defeat against Colorado.

We’ve touched on this storyline a few times here during the stretch run, and it’s worth mentioning again. In this immensely heavy stretch of games, practices will look different and shorter on most days. Todd McLellan used the word sluggish last night to describe his top line, indicating that they would get some rest upcoming. Kopitar has logged the fourth-most minutes in the league this season amongst forwards, leading the Kings, with Iafallo and Kempe second and third on the team in that statistic.

While McLellan has indicated that their production needs to improve, managing minutes and rest will be a key to doing that over the coming games, important games for the Kings.

As such, today was a lightly attended practice, assuming with certain players attending for various reasons, as selected by the staff. On the ice were six forwards, five defensemen and two goaltenders. Among the blueliners were the injured trio of Tobias Bjornfot, Drew Doughty and Alex Edler, as all three players continue their recovery on an eventual return to the lineup.

That doesn’t even mention the injury side of things, which has obviously ravaged the team over the last week or so. Speaking with McLellan this morning, he admitted he’s never quite experienced anything like this right now, in terms of this many players in such a short span, though there is no “woe is me” either, with other teams also working through guys being out. His full quote below –

“Every player, coach, manager has an injury story and I’ve been on teams where we’ve had a lot, but the succession, the rapid series of event that led to it, I don’t think I’ve experienced that,” he said. “I’m reading that Vegas has 10 guys out, there are teams that are beat up right now. It’s a by-product of the schedule, not having played 82 games, I believe, for a few years and bad luck sometimes for individuals, and not just for our team, for any team. I don’t know how many times I’ve said it, whether it’s in the house or on a phone call, but there’s nothing we can do about it, so let’s play.”

“We want to win games and we’ve got to find ways to do it. I’m not opposed to not having Al, Kopi and Kempe together on a line, I’m not and maybe I should clarify that. I feel that the two best players that we’ve had together are 24 and 12 and they’re catalysts right now, so if we were going to do anything, we would split those two players up and try to get other players going. I also believe that the three that we’re talking about are elite players, they are put in a position, through their own ascension throughout the lineup of experience, earning the opportunity and all of that type of stuff, they’ve been very consistent for a long time. I believe they will come out of it, I believe they need something good for them to happen.”

When asked about the possibility of splitting up his top line, McLellan gave an extended response, detailing not only how that move would impact the Kopitar line, but how it impacts other lines as well. The first part of his answer is above. The three aforementioned players are veterans and players who have had bundles of success both this season and in past seasons. Right now, it’s not going their way to the level that everyone knows it can. Thus the questions.

McLellan went on to talk about the line of Byfield, Vilardi and Kupari as being one that has seen those three players thrive when playing together. It’s different elements coming together and each is playing well on a line with each other. The second part of his answer to the question is below.

“There are situations you have to consider the situations with other players and where they have excelled or not excelled,” he said. “I call it the kid line right now, is balanced when it comes to stress, they’re all in the same ballpark, they don’t feel like they have to honor a veteran or anything like that and sometimes that’s really healthy. I’ve seen a lot of communication out of those guys that maybe wasn’t there before, they’re starting to talk and communicate, have faceoff plans, it’s a really good sign.”

At the end of the day, the question is simple – do you alter the other lines to potentially improve one, and the word potentially is key. There’s no guarantee that mashing things up helps the collective group. For now, the Kings are likely in the camp of letting this group figure it out as is, knowing they can always make changes with what tomorrow could bring.

“We can run the risk of two lines to improve one, I think those three can dig themselves out of it, they’re good enough.”

The Kids Are Alright
Speaking of those young fellas, Todd McLellan very complementary once again.

“I think so, I think they complement each other well,” he said. “When I look at Q, he has a little bit more jump, he looks faster, he looks quicker. Is that the other two pulling him along, is he more confident, I don’t know, but he does look better and they are feeling good about playing with each other, I sense that. They’re all centermen, they feel good about playing down low or up high, it protects the three of them, they share the responsibility, the burden of the line. It doesn’t go to one young guy or one old guy, they share it and that’s a positive thing as well. They’re creating some chances and I think Gabe has been much better defensively than he was last year, so he’s learned a new position and he’s responsible and Ras is using his speed, taking pucks wide, creating scoring opportunities, or at least forecheck opportunities for the others. A nice combination of young players that should have good legs right now, and we need that.”

Byfield touched below on his experience with Kupari and Vilardi, as well as playing with more pace, a more direct approach and carrying over chemistry with Vilardi from the AHL to the NHL.

On his line with Vilardi and Kupari
I’m enjoying it for sure. They both have speed and skill, they’re both great players. We’re all natural centermen, so it doesn’t matter if I’m F3 coming back in the zone, I can take care of their position and they can take care of mine. I think, early on, we had some chemistry and they like to push the pace.

On taking chemistry from the AHL with Vilardi and translating it to the NHL
I think, as time goes, you get more comfortable playing with someone, knowing what they do well. Gabe is really good in the corners, stickhandling down there and I’m just trying to find open ice, get into position for a shot. I think they’re both great players, but it helped playing with them in the minors and translating that up here.

On playing more direct hockey as of late and playing with more pace
Yeah, I think [Todd] wants us to play a little bit more direct, he keeps on saying to play a little bit more direct. Not always just dump it in, but chip pucks in and use my size to get around them that way. I’d rather play in their end than my end and if I’m turning the puck over, it sucks going back the other way. He wants us to be direct going forward, get pucks to the net and battle down low.

JQ700
The Kings will honor the 30th goaltender in NHL history to reach 700 regular-season appearances. Quick achieved the milestone on Sunday evening against Florida, as he earned the shootout victory for the cherry on top of a momentous occasion.

Quick will be honored pre-game tomorrow evening, in advance of the game against San Jose. With the game being an ESPN+ broadcast, puck drop is still expected to be just after 7 PM, meaning that the ceremonies will take place earlier than usual for an occasion like this rather than seeing the start of the game delayed. Those attending should plan to get to the rink early to see the ceremony, as it will go prior to the scheduled puck drop, as opposed to having the game time pushed back.

More information on Quick’s milestone is available here, with a feature story on Quick to follow on LAKI.