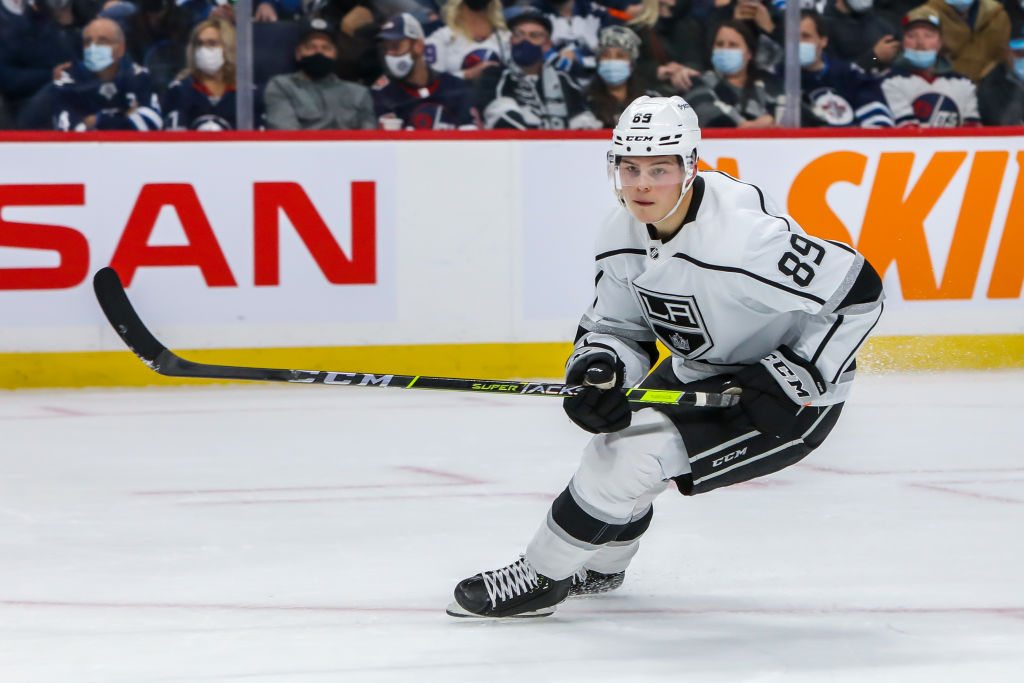 A few stories to share today, as the Kings took the ice in El Segundo, in advance of tomorrow’s trip to San Jose.

First, the Kings have recalled forward Rasmus Kupari from the AHL’s Ontario Reign. Kupari, 21, has appeared in 37 NHL games with the Kings this season, collecting nine points (3-6-9), in addition to eight points (5-3-8) from the 15 games played with the Ontario.

Kupari was a regular in the lineup for the majority of the first half of the season, centering the third line for much of that time, while also working in at times on the wing. Kupari had varying degrees of impact in his time with the Kings, with his combination of size and skill appealing and impressing at times, but consistency, from game-to-game, was an area of focus, especially during the latter couple of months.

In his time with the AHL, Kupari was around a half-point per game, with a few highlight-reel plays on an Ontario team that keeps winning hockey games. The roster spot opened up yesterday when Viktor Arvidsson was added to injured reserve, leaving the Kings with 22 players on the active roster, before this transaction. During today’s practice, Kupari rotated in with the fourth line along with Blake Lizotte, Jaret Anderson-Dolan and Lias Andersson.

Secondly, the Kings made some in-game roster adjustments during yesterday’s overtime loss versus San Jose, the second consecutive game we’ve seen in-game adjustments up front. During the game, three of the four forward lines were impacted, with Alex Iafallo moved back alongside Anze Kopitar and Adrian Kempe, with Carl Grundstrom moved with Quinton Byfield and Dustin Brown and Arthur Kaliyev alongside Blake Lizotte and Jaret Anderson-Dolan.

The lone unit not impacted was the second line, the line responsible for all three Kings goals last night, if you include the shorthanded tally created by Phillip Danault and Trevor Moore.

“The way they both play, they play with so much tenacity and hunt in their game, and yet they’re responsible defensively, so that makes it fairly easy for an individual to go there and play,” Todd McLellan said. “If I’m sitting on the bench, I want to be on that line right now. They get a lot of work done, those two, so if I just did my share I think I’d be okay.”

How the Kings decide to keep or not keep those chances remains to be seen, heading into tomorrow’s game in San Jose. It’s interesting, with how much consistency there has been over the last couple of months at the forward position, and now with a couple of regulars out, the shuffle has been a bit ongoing over the last few games.

Thirdly, defenseman Jordan Spence made his NHL debut yesterday evening. I embedded the video in last night’s game story, but transcribing the quotes here from immediately after the game. Spence had that awkward position of a difficult loss but a monumental moment in his own personal career, and he handled it quite well in that interview.

Spence’s debut statline showed just shy of 11 minute of ice time at 5-on-5, with time on the second power-play unit also included. The Kings had one more shot attempt for with Spence on the ice, one fewer scoring chance and an even count on high-danger chances. All-in-all, Spence didn’t look out of place out there, in any way.

“Did he play to his identity, his personal identity, and he did do that,” Todd McLellan said, after the game. “He moved pucks well, he had great vision, retrieved and broke pucks out, his size didn’t affect him at all in the game, negatively, I thought. Looked confident, looked like he belonged, so those are all real good positive signs moving forward. Often the first one is the easy one, it’s around games three, four, five where it becomes work, and then you really know. Right now, no issues with him at all.”

On his emotions in warmups, on his first shift
It’s emotional, you play hockey to be at the next level in the NHL and having that moment, going out in warmups especially, it’s nervewracking, but also excitement. Playing in the game, I was just trying to take it all in but focus on the game as well. Overall, it was an amazing experience, but it was a tough loss tonight that’s for sure.

On managing his emotions throughout the day
It was just a lot of excitement, I called my parents right away. They helped me with a lot, moving to Canada, all sots of things, so I really appreciate what they’ve done and what they’re doing right now. With the emotions, I just tried to keep it all in, soak it all in, that’s what all the guys were saying. It was a great experience.

On the biggest differences between the NHL and the AHL
I think it’s just more structured, more skill, there’s a lot of good players out there, so you really have to be aware of who’s on the ice. You just have to make simple plays and after that, you can be more comfortable and try and make plays.

On the messaging from the coaching staff, coming in to play his game
Yeah, the first period, you just want to get your jitters out and just make the simple play, but as the game goes on, they want me to shoot the puck and create that offensive threat in the o-zone. I was just trying to do the best I can to contribute and help the team.

Jordan Spence made history on the ice last night 🇯🇵🇦🇺 (via @LAKings) pic.twitter.com/BDw8BJAcYw

With that, the Kings are off to San Jose for a rematch against the Sharks tomorrow evening at SAP Center in Northern California. Coverage from the bay to follow!

By Zach Dooley
24 Comments
Behind the Scenes