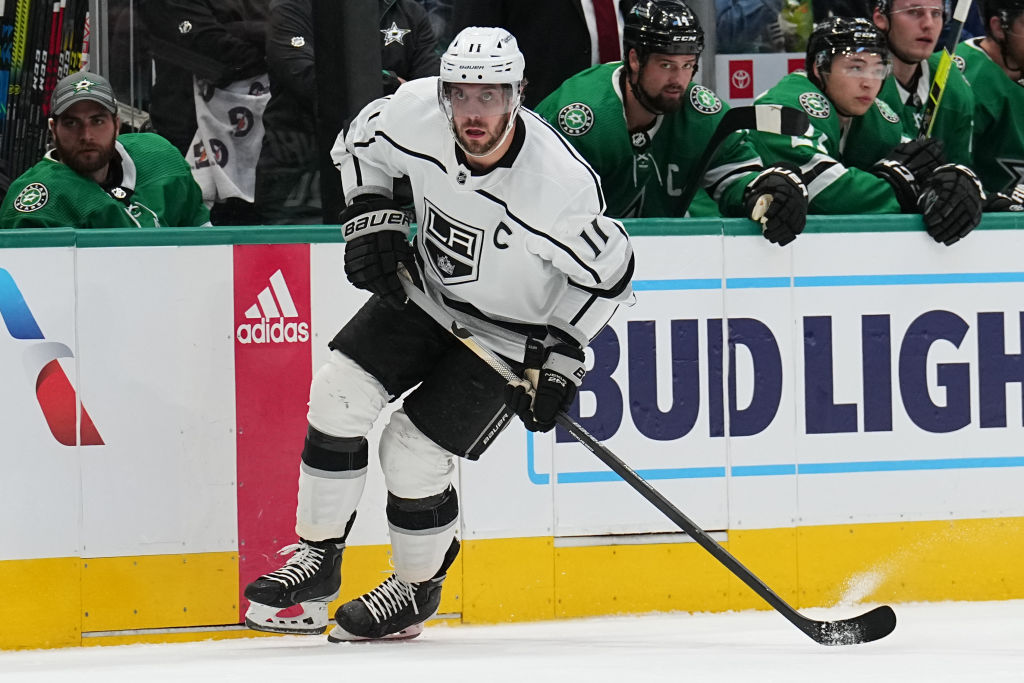 Following last night’s defeat in Dallas, the Kings were back on the ice earlier today at the Children’s Health StarCenter-Farmers Branch – real tongue-twister – just outside of Dallas, before they depart for Columbus.

With just the one day in between games, time on the ice is at a premium, but coming off of consecutive defeats, the Kings had a couple of focal points here in advance of the first meeting of the season against the Blue Jackets.

Feel like we’ve got ten different versions of this quote by now, but cleanout day was the message again here. It’s a different time of the year than it was in say January and different players have different needs. Trent Yawney talked about today being more to just get the guys on the ice and tomorrow, with morning skate, being an opportunity for the lower-minute players to get more in.

“At this time of the year, the mental to the physical is 2-to-1, so over-doing it is no good, you have to find a balance,” Yawney said. “Today wasn’t to get the low-minute guys some work, we can do that tomorrow, it was more just to clean it out and help the trainers out with the flight. We moved the puck around, felt good and got off.”

The Kings didn’t run formal line rushes today, but the jersey colors didn’t suggest drastic changes either. Here’s how the team was set up today by color, and how that shook out last night.

Yawney indicated today that there was a “discussion” about potential lineup changes, but today’s skate didn’t do anything to IP their hand one way or the other. Today’s skate was about the legs, not strategy and structure, but coming off of consecutive losses, with three, NHL-caliber players not in the lineup, there was at least a discussion about a potential switch.

“We talked about that this morning with Todd and we’re tossing some ideas around,” Yawney said. “I think that sometimes, your play is pretty indicative of whether or not you’re going to stay in the lineup, but at the same time, someone fresh on a line can change things. It was the first thing we talked about this morning, that will be up to Todd and Blakey to decide and we’ll deal with whatever they come up with.”

Speaking with Trent Yawney both directly after last night’s game, and again today following after a day of reflection, yesterday wasn’t a bad day, but it was far from being as clean as the Kings can be at the top of their games. That was especially reflective in the second period, as Dallas scored four goals, with Yawney particularly displeased with the last goal conceded, which turned a tie game into a one-goal deficit at the intermission.

A few moments in the game could have turned a 4-3 loss into a 4-3 win and that’s what it’s about at this time of the season. Small details, game management, little moments. Last night, the Kings had one less than the Stars did.

One such area for the Kings was in the faceoff circle last night. The Kings were only 27-of-60, which is really just a few away from being on the right side of things, after being at exactly 50 percent against Boston on Monday. For the Kings though, the league’s sixth-best faceoff team at 52.7 percent this season, it’s a bit of a drop off, though Dallas and Boston rank second and third in the league respectively in faceoff percentage.

“I think we can get more competitive and the first competitive situation is in the faceoff circle,” Yawney said. “It’s not just the centermen, our centermen need some help on those loose pucks. “Looking at the game again, there were a lot of 50-50’s that they won, they started with the puck and instead of us going in on the forecheck, they were going in on the forecheck. I think we can improve in that area.”

The Kings have a Top-10 faceoff man in the league in Anze Kopitar, at 56.7 percent, as well as Phillip Danault at 53.9 percent and Blake Lizotte at 52.6 percent.

Speaking with Kopitar today, he also stressed the importance in the faceoff circle. It’s a simple concept right? Win more faceoffs, start with the puck more frequently. The Kings have done that regularly this season but struggled a bit last night in Dallas.

“Faceoffs are obviously up there, it’s pretty simple, whether you start with the puck or not. We want to start with the puck, obviously, but there’s also going to be nights where things don’t go your way, in the dot. You’ve got to adjust accordingly and last night it cost us.”

Faceoffs weren’t the only area where the Kings came up short. Kopitar touched on having too many turnovers, while Yawney re-emphasized the importance of the endboards, as he did before the game. Few areas to clean up, with little time to dwell heading into another game tomorrow.

The last note on that topic is a quote that is relevant to the section above, but Yawney used what I felt was an interesting phrase. When you overtry, you always underperform. Deep breath, calm down, get back to LA Kings hockey.

“When it does go off the rails a little bit, the tendency is to overtry and when you overtry, you always underperform,” Yawney said. “It’s getting back, breathing a little bit and getting back to who you are, and I think that starts in the circle for us. We’re a good faceoff team, it shows in the statistics, but I thought last night, we lost too many of those 50-50’s that could have turned into something offensive for us. That’s something we can sure up.”

Not The Old, But The Wise
The LA Kings have a very distinct split on their roster this season. There’s the older group of players who have been there before, either with those who have won in Los Angeles, or those who have played in playoff games and have been to the Final in other organizations. Then, there’s the younger group of guys who haven’t been there before. Guys like Alex Iafallo and Adrian Kempe have one, four-game playoff series as NHL’ers. Someone like Matt Roy, thought of as more of a veteran, has never played playoff hockey. And so on and so forth down the list.

One such player who has obviously been through it is the captain, Anze Kopitar.

Kopitar has played in 79 career playoff games. His linemates, who are considered to be part of the veteran group now, at least in the secondary core, have played a combined seven playoff games. Much of the roster is hopeful to play in their first here in a couple of months. Kopitar stressed that the key here is getting back to basics, stressing fundamentals, and playing the same way the team has to date.

“We’re all talking about the fundamentals at all times, you’re going back to basics, but it’s really not rocket science,” he said. “You just have to keep it together. Does it get harder? Yes, but we’ve played good hockey over the course of 55 games now and we want to keep it going.”

There’s the difficult side, the challenging side, and that comes out more after a pair of losses. There’s also the fun side of it when you look more so at the last 72 days than the last 72 hours. It’s fun to be playing in these games, to have a win mean something, even to have a loss mean something.

We’ve heard players who have been here over the last few years discuss it, something Kopitar touched on today.

“We’re in a position that we haven’t been in in a few years,” he added. “There’s guys here that haven’t really experienced that before, it’s still a learning process, a feeling-out process. Saying all that, it’s a lot of fun to be in this spot, where in March and April, we’re playing meaningful games, which we haven’t in a few years. It’s fun, it’s hard, but as an athlete, it’s the spot you want to be in.”

Talkin’ Todd
Lastly, Yawney shared an update, or as much of one as it available on a potential return timeline for Todd McLellan.

The short answer is, we don’t know until we know. Yawney said that McLellan will get word this evening on whether or not he’s able to fly to Columbus or not, which would naturally decide his status for tomorrow’s game versus the Blue Jackets.

“I think he’s booking a flight every day, that’s kind of where it’s at right now.”

With the condensed schedule, McLellan has missed four games in six days. At other points in the season, he might’ve missed just one or two, but the compact nature of the March schedule for the Kings was inopportune timing. Such is life in a season that has been impacted by positive tests since October.

The Kings traveled to Columbus earlier today, following practice, in advance of tomorrow’s game on the road against the Blue Jackets. More coverage to follow in the morning from Ohio!