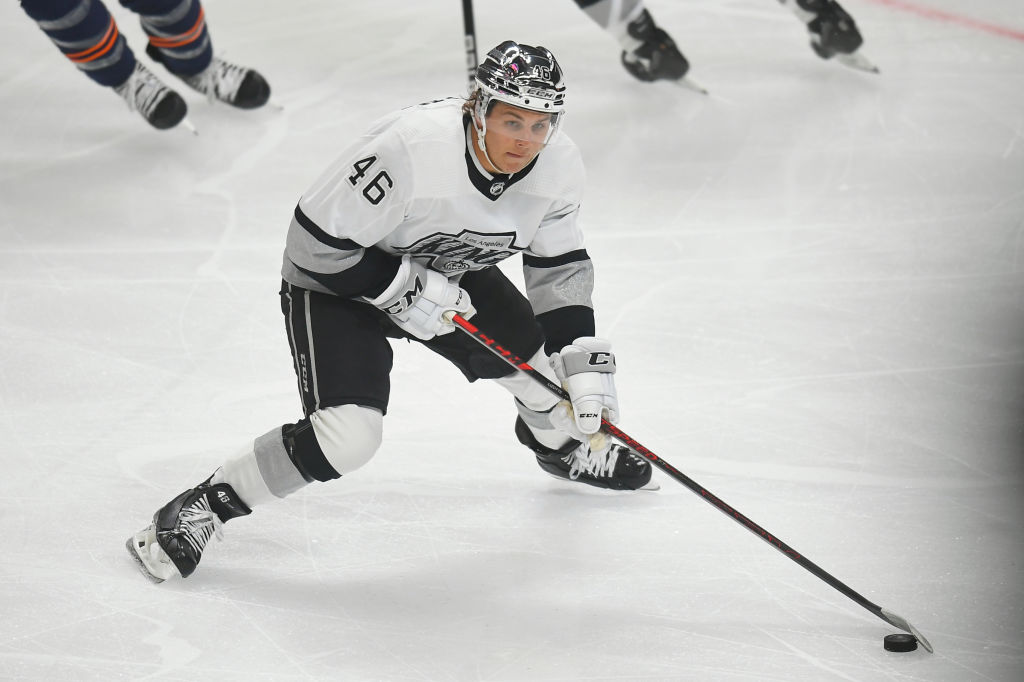 A short skate today for the Kings here at Toyota Sports Performance Center, in advance of the Freeway Faceoff tomorrow evening at Honda Center.

As Todd McLellan has said a few times over the last couple of weeks, practices down the stretch will have a different flavor to them. The Kings will get what they need out of skates as they manage the minutes and the workloads of their top-level players over a stretch run that consists of 31 games in 63 days.

“It was a cleanout day, it was a day to be quick, to feel fast puck movement and to get away from the rink,” McLellan said after practice. “We’re going to be doing this a lot and we’ll get ready and be prepared to play tomorrow.”

Of this group, forward Lias Andersson skated in a regular jersey for the first time since returning to practice last week. Andersson was the extra forward on the Lizotte line during rushes today, with Carl Grundstrom rotating in on the Byfield line.

Interesting quotes today from Blake Lizotte and Todd McLellan on how the season has progressed from an 82-game standpoint. When you’re playing games in October, the theme of the day is that two points in October are the same as two points in February. And that is true. You sure don’t want to give back those points from October, and two points yesterday don’t count for any more than the two points picked up on Opening Night.

It’s just a different feeling now, as the standings shape up. 10 games in, every team was in the playoff hunt. Now, with right around 30 games remaining around the NHL, that list has dwindled and while the points are not any more important, they do have more of a say in the current standings, with the base built by those points won and lost earlier in the season. McLellan and Lizotte weighed in on “taking the test” after today’s practice.

McLellan – We want our group to feel good, feel confident, but they have to be trusting players when they’re on the ice and we’ve got to catch them doing things right. When things are going good, you’ve got to catch them doing it properly and reward them for that, because they will likely do it again if they get the pat. We’ve got to take the test. We’re into the fourth quarter of our sophomore year, maybe, we’re getting down to where it’s really getting there. The first ten games, you get tested on a small amount of content and then it just grows. The longer you go and you stay in it, the test gets tougher and you’ve got to remember the first quarter, or the first term and all the way through it. That’s why you take the final and we’re working towards that.

Lizotte – I think, at this point in the year, we obviously want to make the playoffs and we start talking about the playoffs more, how important each game is. I think the first half of the year, you talk a lot about how these two points in October are as important as two points in April, but now we’re at that point where it’s becoming a reality to make the playoffs. We always say, we’re kind of in the playoffs now, even though there are 30 games left. You win three games in this conference and you’re in the same spot, you lose one or two you might be four points back. Each and every night is important and it’s essentially playoffs for us right now.

With the tightly-packed Western Conference standings, it truly is a playoff feel every time out. More and more games down the stretch will be four-point games, with lots of opportunities to move up and down the standings.

Following Goals
Over their last three games, the Kings have answered back after a goal against within 30 seconds with a goal of their own.

It was Andreas Athanasiou in Vegas on Friday, Adrian Kempe in Arizona on Saturday and Blake Lizotte in Arizona last night. That’s three different lines that have answered back with a goal to immediately swing momentum back the other way. Now, that’s not always going to be the case, with that immediate of an answer, but the shift after conceding a goal is extremely important nonetheless.

“It’s huge,” Lizotte said earlier today. “You can get momentum back, obviously you get scored on and the momentum swings to the other team a little bit and that push back is huge. Last night, we ended up scoring and that’s not always going to be the case, but if we can get a good, offensive-zone shift, hem them in a little bit and pass along a good momentum shift to the next line, it can be huge.”

As noted above, it’s not always the Lizotte line that’s used in that situation, but it is frequently the case. Lizotte centering Arthur Kaliyev and Brendan Lemieux has been the team’s most consistently used forward combination over the course of the season, and off of a goal allowed, they have frequently been used in an effort to reestablish the momentum.

McLellan appreciates the direct nature that line plays with as being a reason for getting them back on the ice after conceding. As always, it’s not an absolute, and it’s situation-dependent, but that line is one that has been good for the Kings in those situations.

“They’re direct,” McLellan said. “Lizzo wins the draw, they know where they’re going with it, it’s probably exactly what we’d like after a goal. It’s not always going to be that line that goes, depending on time of game, the next matchup that’s coming, but when we do use them, they get going North fairly quick and establish a forecheck, which is what you need.”

While after goals are when momentum typically swings, the same can be said for after a power play or a penalty kill, when it comes to rolling momentum over. After a successful kill, or a man advantage that generates positive momentum but not a goal, the Lizotte has frequently been turned to there as well.

McLellan has the utmost confidence in them in all situations, something he expressed earlier today.

“I think we can use that line at any time,” he said. “How often do you just stay in the same place momentum-wise, you gain a little or you give back a little every time you’re on the ice. For the most part, they’ve been gaining an extra foot, rather than giving a foot back. They’re not perfect, but they’ve been able to do that, game after game, and they deserve to be out there.”

Liz-Nasty
With a couple of quotes pulled above, hear the entirety of Blake Lizotte’s interview from this morning.

Lizotte touched on playing at Gila River Arena for the final time, comparing the two games played in Arizona, gaining confidence as he plays more and facing off against the Ducks in a big, divisional matchup tomorrow evening.