With 1,000 games under his belt, Brett Sutter’s impact has been felt throughout the organization 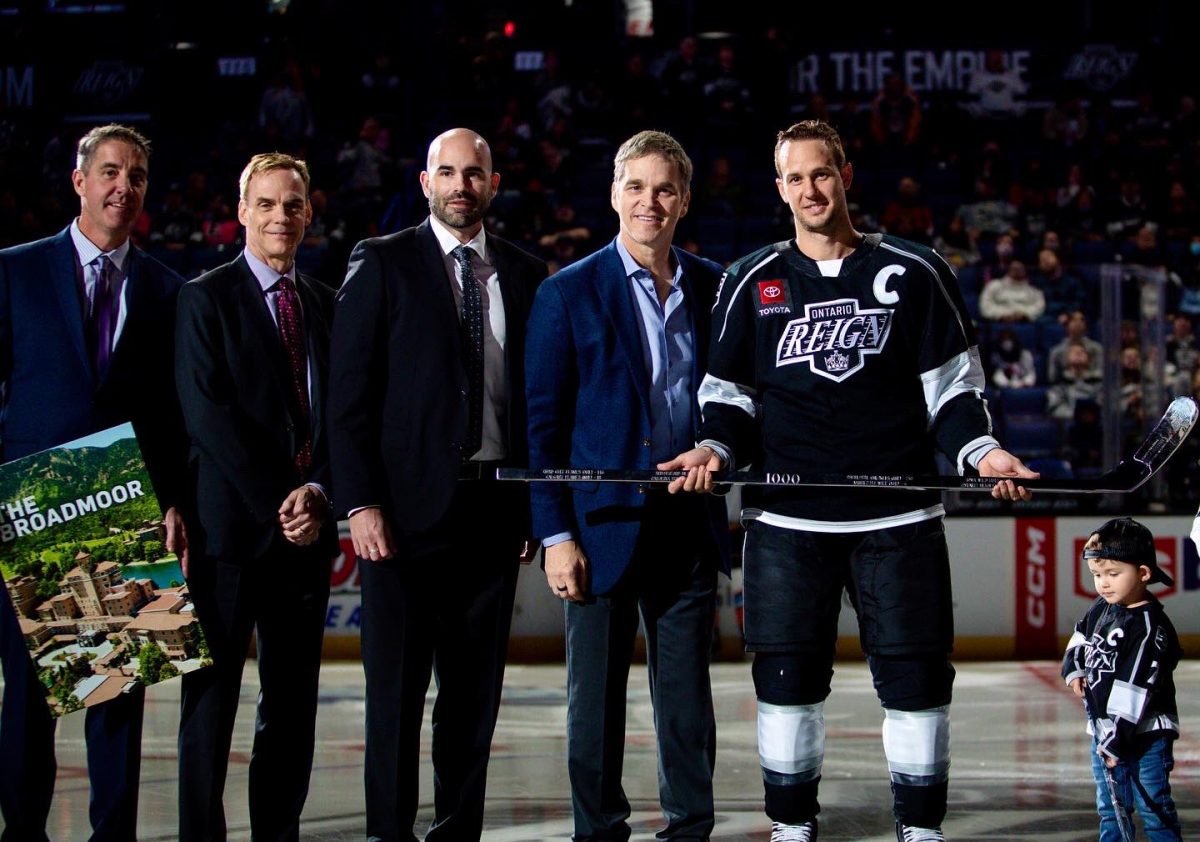 A special night for a special player.

Brett Sutter reached 1,000 professional games late last month in San Jose, but due to a road-heavy schedule for the Reign, the team wasn’t able to honor the milestone until just this past weekend, as Ontario hosted the San Diego Gulls.

“In San Jose, I had the chance, with the team, to really embrace it as a group,” Sutter said, after Sunday’s game. “Today was about the family, my wife and kids and some close friends and family being here. Two different feels, both great days, once again I was treated amazing and I couldn’t have asked for a better day.”

A strong turnout was on hand at Toyota Arena, as the organization honored its longest-tenured member. Sutter joined the Reign in 2016, as a part of a deadline deal that added Sutter to an already stacked roster for a shot at a championship, a journey that eventually ended in the Western Conference Finals. The journey for Sutter in Ontario, however, was only beginning.

Since he was acquired now approaching six years prior, Sutter holds nearly every franchise record by a skater. No player has appeared in more than Sutter’s 354 games in a Reign sweater, 160 more than Kurtis MacDermid in second. Sutter’s 80 goals, 95 assists and 175 points in an Ontario sweater also stand atop the franchise’s all-time list.

From a personal standpoint, few players have meant as much to an organization as Sutter has to Ontario, and that was expressed during the ceremony on Sunday.

“There are lots of great leaders that we have, but Brett is the one who leads the way in all aspects,” Ontario assistant coach Chris Hajt said. “On the ice, on the bench, calming things down, or whether it’s off the ice, doing community stuff, whatever it is. He’s always about the team, his relationship with his teammates, you can tell how much he loves them.” 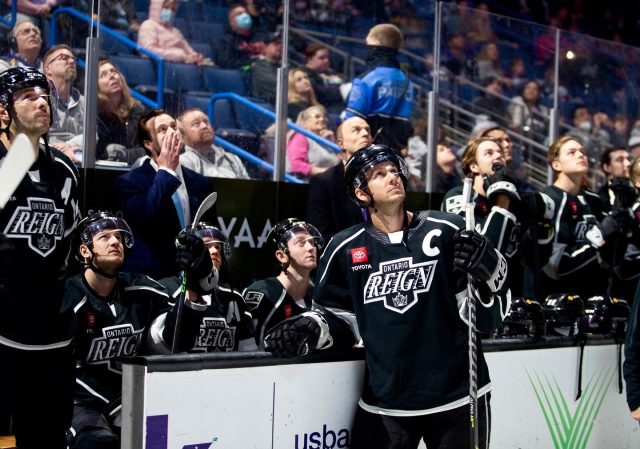 Sutter’s impact on the organization – both with the Kings and the Reign – goes well beyond simply his abilities as a player. Sutter has been the captain in Ontario since the 2017-18 season, replacing another great franchise leader in defenseman Vinny LoVerde.

In that role, Sutter continued to not only be a productive forward, but also an elite leader. The role changes a bit as you get older in the AHL and no player has embraced that more than Sutter. Whether it be the first line or the fourth line, power play or penalty kill, or “even the backup goalie”, Sutter has always been willing to put the team before himself. In doing so, he became the perfect role model for younger players moving through the organization in pursuit of an NHL dream.

“He was just a true pro, a true leader, he led by example and he was the hardest worker every day,” Kings defenseman Matt Roy said. “He was always one of the better ones in practice, he was a guy that you can look to, model your pro self afterwards. You look up to him can trust him with anything, I think that’s a big reason why he’s been around for so long.”

Roy is one of several on the Kings roster currently who was once a teammate of Sutter’s in Ontario. Roy was with the Reign from 2017-19 and credited Sutter’s impact and influence as one of many that helped him to become the player he is today.

When asked, Hajt said that there is “one-hundred percent” an importance to having a player who can help and assist as a part of the development process. Coaches and players have one relationship and development staff members have another, but the relationship between players, teammate to teammate, is one that can’t be replicated. That’s where Sutter has been so valuable not just for the Reign, but for the Kings as well.

“If you’re playing with them every day, going on the road with them, going out to dinner with them, you can pick up a lot more from them, in a different setting,” Roy added. “Obviously, development guys have their place too, it’s just a different relationship and a different vibe. I think it’s very beneficial.”

It’s not just the players that have taken notice, either.

From an organizational lens, Sutter is among the best available when it comes to veterans at the AHL level. From a management level, Kings General Manager Rob Blake has spoken highly of Sutter’s impact several times over the years.

“Brett Sutter obviously does a tremendous job, not only adapting those kids, but showing them what to do every day,” Blake said. “You can’t ask for much better than what we get out of him.”

Speaking with Todd McLellan before Sutter’s ceremony, though he has only coached the Viking, Alberta native during the preseason, he is well aware of his impact. McLellan noted that the coaching staff reached out to personally congratulate Sutter on his accomplishments, as did players in the room.

Even though he’s not on a Kings contract, and even though 1,000 games played predominantly at the AHL level doesn’t get the fanfare that say Drew Doughty’s 1,000 games did, the importance wasn’t lost within the organization. McLellan was sure to make note of that.

“The organization as a whole, he has an impact on us,” he said. “I’ve only been able to coach him in an exhibition game, but knowing that team is in his hands, he’s put himself out front, has a really good thing. He has tremendous leadership qualities, he plays with character every night, he’s proud to wear the jersey….we’re proud to say that he’s a part of our organization.”

Now, with his own days in the NHL behind him, there is a sense of pride that Sutter takes in seeing young teammates move on to that level himself. It’s not uncommon, when a Reign player makes his NHL debut, to see a fun, congratulatory tweet from their AHL captain.

Sutter was once that player in his early 20’s, making the jump from the AHL level to the NHL level. He logged games with three different NHL franchises, moving up and down for several years before finding his niche here in Ontario, on an AHL contract, still playing at a high level but also helping to mentor the next wave of NHL players. There’s a sense of pride when one of those players gets his opportunity.

“The older you get, you really enjoy watching guys that you look at like brothers go up and live their dream, chase their dream,” Sutter said. “I think just, as a group in general, when a guy goes up, the excitement that we show and the support we have, there’s competitive competition in that room, but everyone is genuinely excited for each other I’m just proud to be a part of it.”

With a terrific night now behind him, Sutter and the Reign have their sights set on a playoff berth, one that looks firmly in sight with the team currently sitting atop the NHL standings.

As a part of the ceremony on Sunday, the Reign honored Sutter and his family with a vacation to a resort in Colorado, something that will certainly be a welcomed trip away for the family of five.

As for when he might go about booking that trip, though?

“Hopefully it’s not going to be until July, hopefully we’ll be playing here until the end of June, that’s the plan.” 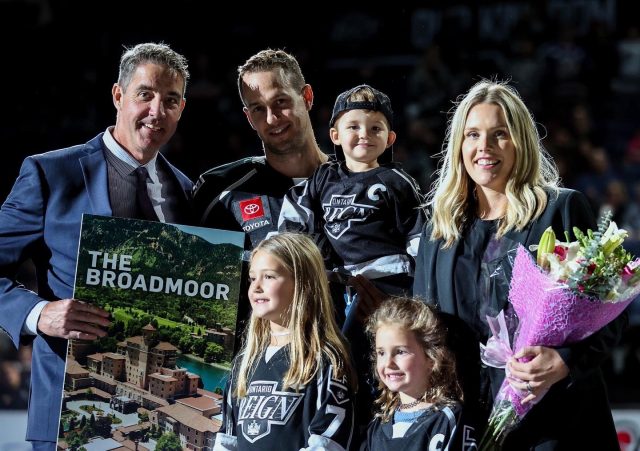