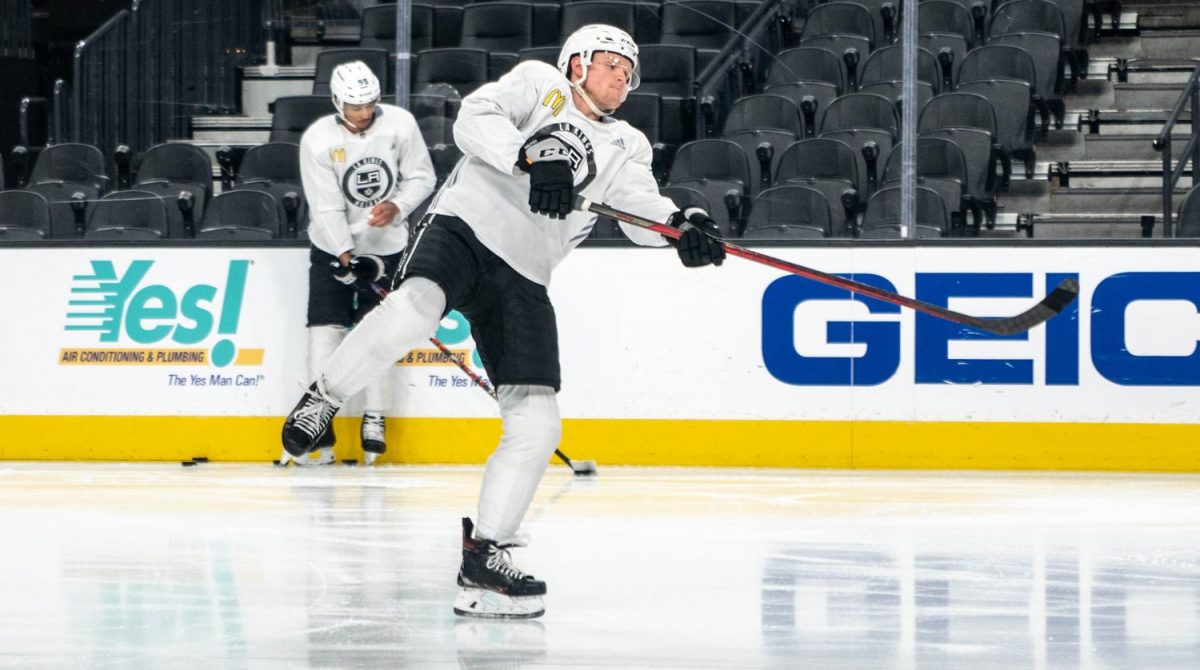 TONIGHT’S MATCHUP: The Kings hit the road for the first of four consecutive games away from home, beginning this evening against Vegas.

HEAD-TO-HEAD: The Kings and Golden Knights have each won once thus far in the season series. The Kings won 6-2 back in October, with Vegas winning 6-3 in December. No player has more points this season (6) or all-time (27) against the Vegas Golden Knights than Anze Kopitar. Kopitar’s six points this season are one clear of teammate Drew Doughty, while his 27 points all-time are nine clear of teammate Alex Iafallo.

KINGS VITALS: The Kings saw their six-game point streak snapped on Tuesday, though that streak remains intact in terms of strictly road games. Tonight’s game is the second of three rescheduled games on the docket, with tomorrow’s contest in Arizona concluding that stretch for LA.

Goaltender Jonathan Quick did not skate this morning for the Kings, making him the presumed starter this evening. Quick carries a 4-8-1 regular-season record versus Vegas into tonight’s action, with a .875 save percentage and a 4.15 goals-against average, his lowest career save percentage against a particular opponent.

In terms of personnel, the Kings appear set to have the same group available to them as last game against Edmonton. Todd McLellan confirmed this morning that the third line will get another opportunity tonight in Vegas, which essentially confirms the same lineup this evening for the Kings.

If a last-minute change is necessitated for one reason or another, forward Carl Grundstrom and defenseman Jacob Moverare are options to check in. Forward Lias Andersson joined the group in a red jersey yesterday, a good sign towards his eventual return to the lineup, though he did not travel with the team on this short, two-game trip. Expect to see him with the group again when the Kings return to practice at home on Monday.

For reference, here’s how the Kings lined up yesterday morning for practice –

Team’s Ability To Bounce Back
Since the calendar flipped from November to December, the Kings have lost back-to-back games during just one span of three games, defeats against San Jose, Tampa Bay and Colorado in mid-January. Outside of that four-day window, the Kings have followed every loss with a win, stringing together multiple victories several times throughout that stretch of games.

Tonight represents a big test of that resolve. Coming off of Tuesday’s loss, the Kings now visit Vegas, an arena in which they lost three of four games played last season. This is a different Kings team no question, but it’s also the home of a Golden Knights team with a division-leading 14 home victories.

Vegas hasn’t quite been the home machine they were in past seasons (58 games over .500 from 2017-21), but it’s still a firm challenge for a team looking to avoid consecutive losses out of the break.

“I think we have the skillset, physically and mentally, to do that on a lot of nights,” Todd McLellan said this morning. “There’s a lot of pride in the room, there’s strong leadership and I think we also sense the importance of these games. Now, with that being said, so do the other teams right now, it’s that time of the year. It’s going to get harder to bounce back from losses, but that’s what our team and our organization needs, we’re starting to graduate now.”

It’s one of several traits the Kings have shown this season, traits that have allowed them to climb from a team at the bottom of its division to a team firmly in the mix for a playoff berth as we approach 30 games remaining on the schedule.

“Coming in today, games are going to come fast and the schedule is going to diminish quickly, so we have to push ahead, that’s how important they are,” McLellan said. “There are going to be segments where we stumble, where other teams stumble, but you’ve got to crawl out of that quickly.”

Much of this roster has yet to experience a “stretch run” at the NHL level. Four of the team’s six defensemen haven’t done it and neither have some of the younger forwards on the team.

As McLellan simply put it – “There’s no replacement for experience other than experience.”

Artillery Arthur
If you sort the Kings roster by games played this season, you’d see three names that have played all 48 games to date – Anze Kopitar, Trevor Moore and Tobias Bjornfot.

Right behind that group? Young Arthur Kaliyev, who has skated in 47 of the team’s 48 games played to date. Kaliyev was a healthy scratch in Nashville, just the third game on the schedule, the only game he’s missed all season long.

For many players in their first NHL season, this might be the time of the year when that “rookie wall” starts to set in. For McLellan and the coaching staff, however, Kaliyev is one of the players the Kings are least concerned about. They’ve given him a role he’s fit for thus far, and he’s been effective and productive in filling it.

“He might be one of the younger players we worry the least about, because he’s found a good home, he’s delivering most nights, in all situations,” McLellan said. “We’re not forcing him up the ladder, we’re not overdemanding, but he’s delivering and that’s a pretty good combination.”

The concept of not forcing it with Kaliyev has been important for his development and his process. Kaliyev was tried in the top six a few times earlier this season, but didn’t quite have the “engine” as McLellan put it to be there consistently at this time. From that point on, he’s found a consistent home playing with Blake Lizotte and Brendan Lemieux on the fourth line, and he’s responded not only with nine goals as a 20-year-old, but with improvements in the entirety of his game.

Having that consistent home has made things easier for Kaliyev, and having that role be managed is something that has allowed his development and production to remain steady, and at the right speed for him.

“I think so, yeah, and I think they do as well,” Kaliyev said, of consistent linemates benefitting him. “I think we all know how we play and what we want to do and that makes it easier every game. It’s not like at the start of the season, when I had different linemates every game.”

We all know what Kaliyev’s ceiling can be – a high-level, NHL goalscorer.

That ceiling hasn’t changed, but what has improved are the all-around contributions that Kaliyev is capable of. Speaking with McLellan, he talked about how when Kaliyev came up last season for that one game against Anaheim. The goal he got was great on a personal level, but McLellan felt that Kaliyev wasn’t a full-time NHL player at that time. Now, with a full season to date of experience, he firmly is an NHL player, and that’s a great sign for the Kings.

“It’s a good progression,” McLellan said. “If you think back to the Anaheim game last year, it’s great he got a goal, that’s exciting for him, but he was not an NHL player at that point and it shows how far he’s come now. The ability to learn and get confidence as he goes on is a really good thing for him. We’re not asking him to over-deliver and I think that we’re building a career for him, we’re not just throwing him in. As time goes on, I’m sure he can bite off more and more and be a solid player.”

McLellan on Line 3
Lastly, Todd McLellan was asked what he needs to see more of from his third line, consisting of Quinton Byfield at center between Andreas Athanasiou and Dustin Brown. A line that, on paper, has some damn good ingredients, especially when you factor in that it’s a third line, but a line that hasn’t quite gelled as a trio just yet.

“If I look at the assets on that line, you’ve got a six-foot four centerman, who’s supposed to make plays, you’ve got one of the fastest players in the league and you’ve got grit and grind that can go to the net. You put all of those three variables together, that’s a pretty darn good line, but none of them right now is really bringing what they need to bring, and it’s a mismatch. They’re going to get another chance tonight, but if each of those three players plays their own individual game, it can be a really good line, it’s just getting them all together. Right now, we like what the other three lines are doing, so it’s up to those guys, and other we can put in there as days go on, to change that up. It’s up to them to figure that out.”

As McLellan noted, that line will play together again tonight, another opportunity here to gel against Vegas.

Kings and Golden Knights coming up a few hours down the road, Game Thread to follow from Nevada, Insiders! 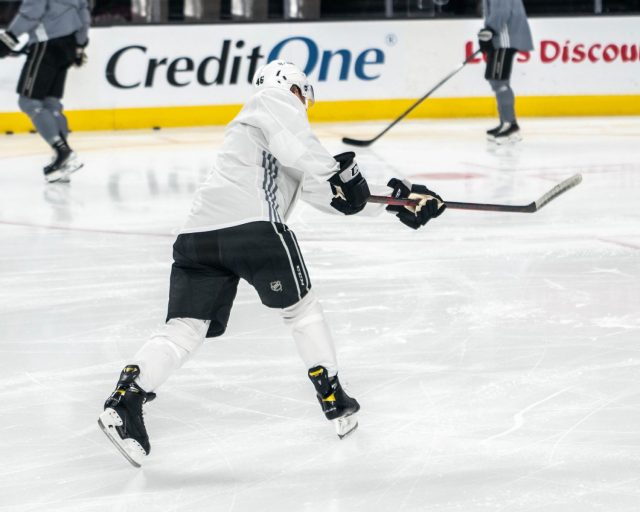 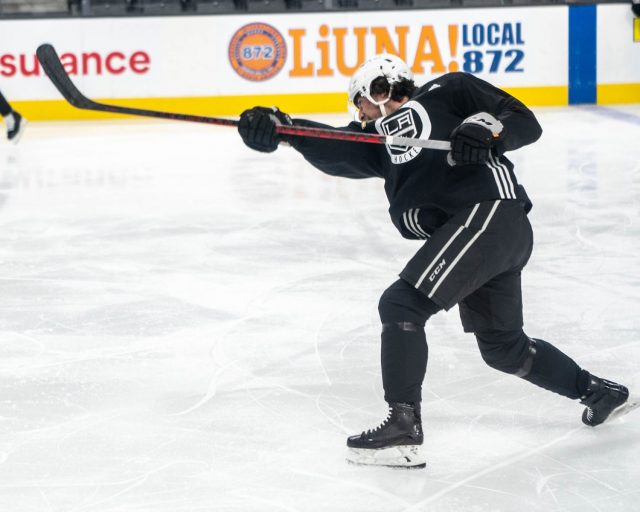 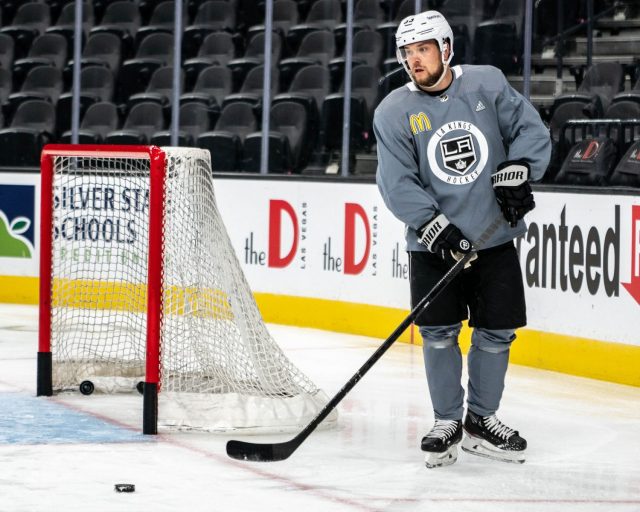 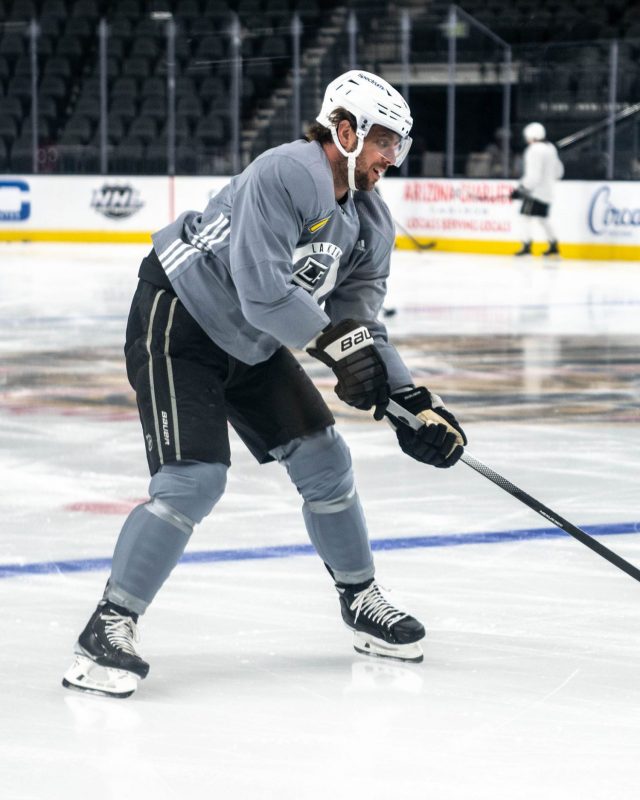