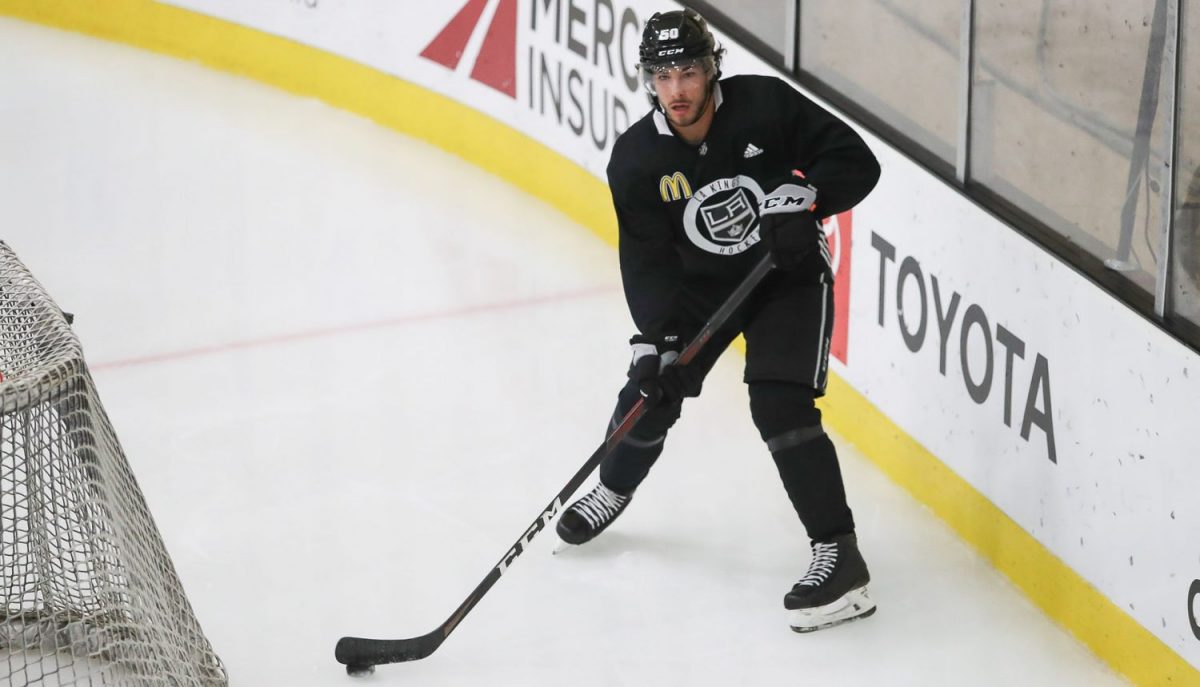 The LA Kings hit the ice for the final time before departing for Las Vegas later on today. The Kings are set to begin a back-to-back in the desert, with games against the Golden Knights and Coyotes this weekend.

At this stage in the season, following the mini-camp type situation preceding the Edmonton game, we’re not expecting to see too many marathon practices from here on out. Time on the ice is at a premium, with a jam-packed schedule to close out the season. It’ll be a couple of key points of emphasis, recover and get ready to go again from now through the end of April.

“We’re not recreating the game from now until the end of the season,” McLellan said. “We’re cleaning things up, we’re trying to advance a little bit and we’re going to do it in 30-35 minute increments, that’s it. We have to recover from the blows we might receive, get over the successes and move on every day.”

Today’s skate looked similar to how the group lined up yesterday, with 14 forwards, seven defensemen and two goaltenders.

To Watch, Or Not To Watch
We, meaning us who are talking about the team, are looking at the standings regularly. I do it as a writer, you do it as a reader, we all do it.

But do the players and coaches look at the standings, and if so, how regularly do they do so?

In the Kings locker room, the standings are posted in plain sight each and every day. Speaking with defenseman Matt Roy, the Kings display the standings right by where the players eat breakfast in the room. When you first come in and grab something to eat, they’re right there to see and observe.

“The whole year, we’ve had the standings up, every year,” Roy said. “It’s by our breakfast area, it’s up, you should know and everyone knows now. It’s not something we talk about, it’s just something that everyone knows. You have to be ready to do your job.”

The standings aren’t anything the coaching staff is preaching on a day-to-day basis either, because that would go against the mentality that most hockey teams preach. Everyone knows the longer-term implications of the standings and everyone knows what’s needed over a longer term. But if you talk about it from a “we need to win this many of the final 34 games to make the playoffs standpoint” you lose sight of what’s needed in the moment.

Look back to the recent roadtrip. After five games, the Kings had eight points, which constituted a successful trip regardless of what happened in the final game. Could the Kings have simply been content at that point? They could have if they took that longer-lens perspective. But Todd McLellan and his staff are worried about having a good 60 minutes and not much further.

“Just living in the moment more than anything,” he said. “These guys are smart, they know where we are, they know what’s at stake. We don’t need to remind them all the time, but we have to prepare, so I think that’s more about our moments, now, not hey, we need to win seven of our next 11 games, you’ll never hear that from us. But, you have to have a good 60 minutes coming up against our rivals down the road, they’re a hell of a team and it has to be better than our last 60 minutes against them.”

In The Hunt & Meaningful Games
It feels good to be in the hunt, doesn’t it?

“I thought that we could [be in this position],” McLellan said. “The first year was tear down, the second year was a strange year, but if it was a normal year, you start to clean things up. Now, you’re beginning to stabilize. Tear down, build a little bit, stabilize and then begin to push. We’re in that stabilize period right now and maybe we can move forward and start to push, maybe we’re already doing that, I don’t know. We’re certainly on that time frame, or that plan, we’ve moved the needle past two stages already.”

For many players on this Kings team, this is their first experience with being in a playoff hunt at the NHL level, or even the professional level. The 2019-20 Ontario Reign team was right in the mix but that season was shutdown due to the COVID-19 pandemic, cutting short the opportunity to push for the postseason.

The Kings haven’t truly been in this position since 2017-18, with the last three seasons falling short, even if the organization could have been considered to be in the hunt at various times over that span.

One such player is Sean Durzi, who was a part of that 19-20 Reign team, but this is his first go-around at the NHL level. Just six members of this Kings team have played playoff games in a Kings jersey, though several others have been in this place with other organizations. For the younger, up and coming crop, this is the first time to experience important games down the stretch.

“It feels like it’s been a while, since juniors really,” Durzi said. “My first year, before it got shutdown, we were fighting for a spot, first pro year, that was pretty exciting, but this is different. This is the National Hockey League now, it’s the same competitiveness, the same drive to win, but bigger stage, bigger prize. It’s what you dream of. Obviously a long way to go, but the guys have the right mindset, we have a great group of guys, they know what’s at task going forward and what’s at stake. I’m just happy to be a part of it and really want to put our best foot forward because I know we can.”

A good place to be, and here’s to hoping for more to come.

Deadline Thoughts
Lastly, hear from Todd McLellan speaking about his past experiences entering the trade deadline. McLellan shared with us that he and General Manager Rob Blake “talk often” about the roster, as well as what is going on in and around the NHL. At this time, McLellan says that he personally hasn’t put a ton of time into potential deadline deals, though he knows that if and when the time comes, he will be looped in.

McLellan on making a move
I’m confident this team can make the playoffs or push for a spot in the playoffs. Making a move, I’ve been on so many different sides of the coin in my years. You make a move and you anticipate great results but it doesn’t work for chemistry reasons. It affects the room, the guy going out had an impact and the guy coming in couldn’t get his footing quick enough. You bring somebody in and it’s a homerun, or you bring somebody in later and he doesn’t quite adjust to the environment, there’s so many pros and cons to doing it, both ways. I like our team right now, I think everybody’s important, I think everybody’s found a role. That doesn’t mean a week from now it can’t change. It can change a month from now, with factors that come into it, injuries, fatigue factor, COVID, it still exists and there still will be testing when we go to Canada or if someone gets sick. There are a lot of variables that come into play.

McLellan on making a move earlier as opposed to later
It probably costs you more, the acquisition cost is likely greater if you get somebody earlier, so there’s pros and cons to everything. Again, I’m not talking about the LA Kings, or Blakey and his group, just my experience. If you get to that deadline and there’s a player available, that may cost you less than a 40-game player, or someone who has extra term on their contract. As far as acclimatizing, the more time you have with the team the better, if the player is going to work for your team. If that individual isn’t going to work in your environment, it’s just more time with a person that doesn’t fit, so it can go both ways.

The Kings are traveling to Las Vegas this afternoon in advance of tomorrow evening’s game against the Golden Knights. The team is set to skate at T-Mobile Arena tomorrow morning before the back-to-back set this weekend versus Vegas and Arizona.